In the streets and online, Myanmar's citizens unite in creative opposition to the military junta 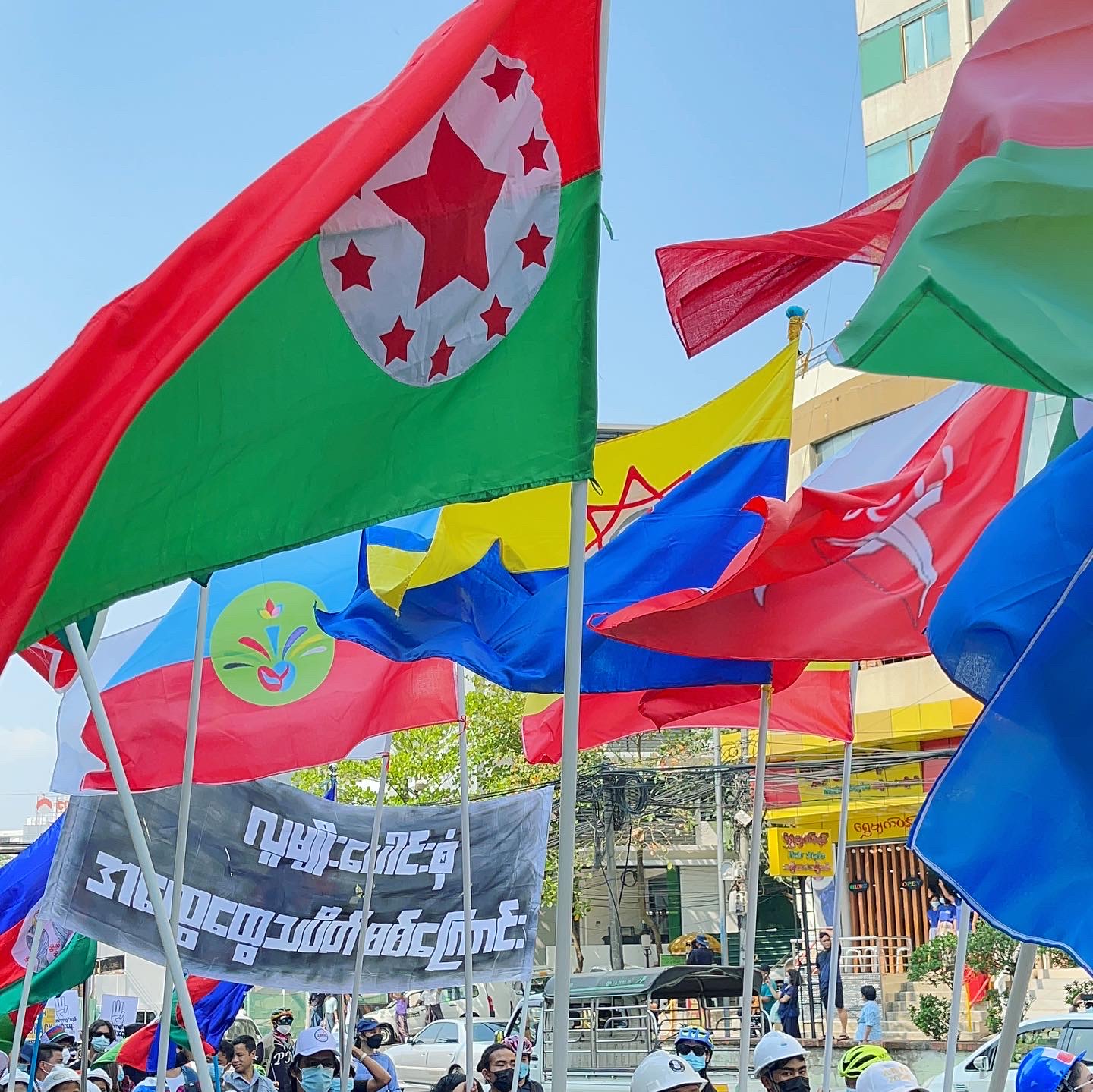 Flags of different ethnic nationalities of Myanmar during an anti-coup protest march in Yangon. Used with permission.

Much of the energy behind the protests taking place in Myanmar since the military coup on February 1, 2021, has been provided by young people—members of so-called Generation Z—who have harnessed their creativity, tech skills, and determination to push back against military rule.

The protests have also been highly inclusive, welcoming people representing a diversity of professions and identities, including people from a range of religious faiths and from the LGBTQ community. Civilians have supported protesters by providing food, drink, printed placards, and transportation. Others have contributed by cleaning up the streets during and after protests to help maintain the protesters’ good image.

On February 11, the General Strike Committee of All Nationalities (GSCN) emerged, uniting 27 of Myanmar's ethnic nationalities—an extraordinary show of unity against a common enemy. GSCN sent out a strong message in favor of federal democracy and the abolition of the 2008 Constitution drafted by the previous military junta.

Ethnic activists call on the people to join the protest tomorrow
✊To end dictatorship
✊To abolish 2008 constitution
✊To establish a Federal Democratic Union of Burma
✊To demand the release of all political prisoners #WhatshappeninginMyanmar #MilkTeaAlliance #GSCN pic.twitter.com/SUI10mxitd

In uniting people across ethnic lines, the anti-coup protests have even prompted some to rethink their stance on the embattled Rohingya. The Rohingya, a minority Muslim ethnic group living in the western border area of Myanmar, have long been oppressed by the military and are not recognized citizens by the government of Myanmar.

We, #Rohingya completely understand your pain. Together we will win this fight. We all are with you to get rid of military regime from #Myanmar. Our common enemy is #MinAungHlaing. #Feb28Coup #myanmarmilitarycoup #MilkTeaAllianceMyanmar #WhatsHappeningInMyanmar pic.twitter.com/fohhxIEAgd

Many Rohingya youth have joined the fight against the dictatorship.

The protesters have employed a number of creative campaign methods.

On February 18, young protesters in Yangon walked back and forth over pedestrian crossings after police told them not to block the roads. The tactic designed to mock the words of a military spokesperson who had said two days earlier that the coup had been carried out lawfully. The protesters, in response, crossed the streets again and again in ‘lawful’ fashion to block the flow of traffic.

People have used any means they can think of to fight against the dictatorship. This includes the use of cursing rituals based on folk beliefs in cities like Bagan, Pathein, Yangon and Kyaukse; the emblazoning of messages such as “We want democracy” in large letters on city streets across Myanmar; the projection of protest imagery on building walls at night; graffiti; and prayer sessions on the streets by Buddhists, Muslims and Christians.

The anti-coup movement also issued a call to boycott military-owned businesses and their products. A mobile app called “Way Way Nay” (Stay Away) is one of several digital platforms compiling information on businesses with links to the military. Military-owned telecommunications provider MyTel's earnings were reportedly down two weeks after the coup, as were those of Myanmar Beer.

Taking place alongside the boycotts is public shaming of supporters of the military council. Since the second week of February, many vendors in different cities have posted signs indicating their refusal to sell to military and police families; some even refuse to sell to civil servants who did not join the civil disobedience movement. Conversely, some shops have offered discounts to help those participating in the CDM.

Another tactic protestors have used in Yangon and other cities is to stick photos and images of the coup's leader, General Min Aung Hlaing, on the ground or on their shields as a way to discourage soldiers from advancing—stepping on or assaulting even an image of their leader would be considered a sign of disrespect in Myanmar culture.

But the fight has not just been on the streets—“keyboard fighters” have been working online to attract international attention and keep the protesters engaged. The hashtag #WhatshappeninginMyanmar has been widely used on both Facebook and Twitter.

Also prevalent on social media are public shaming and calls for social punishment of military supporters and violent police. Anti-coup social media users have published names of the military personnel who have harmed protestors as well as exposed information about people who made fun of those incidents.

Myanmar's hackers have warned that they plan to target all military websites, including those of the Myanmar Central Bank and the military council. On February 18, the international hacker group Anonymous announced on Twitter that they would help the citizens of Myanmar, and on February 23 declared cyberwar on the Myanmar military.

Content ridiculing the military and police on the internet has also kept the population entertained. Facebook pages like Generation Z have been posting images and memes based on incidents taking place during the protests, while also drawing attention to gestures of support and the creative strategies used by younger generations both to get attention and avoid arrest. 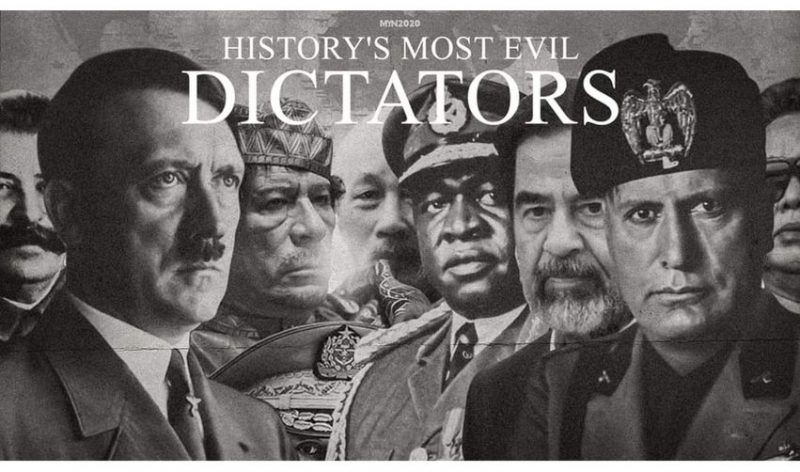 Social media meme widely share with the caption: Find Min Aung Hlaing. The senior general (on the slightly left bottom in the picture) is often ridiculed for his short stature. 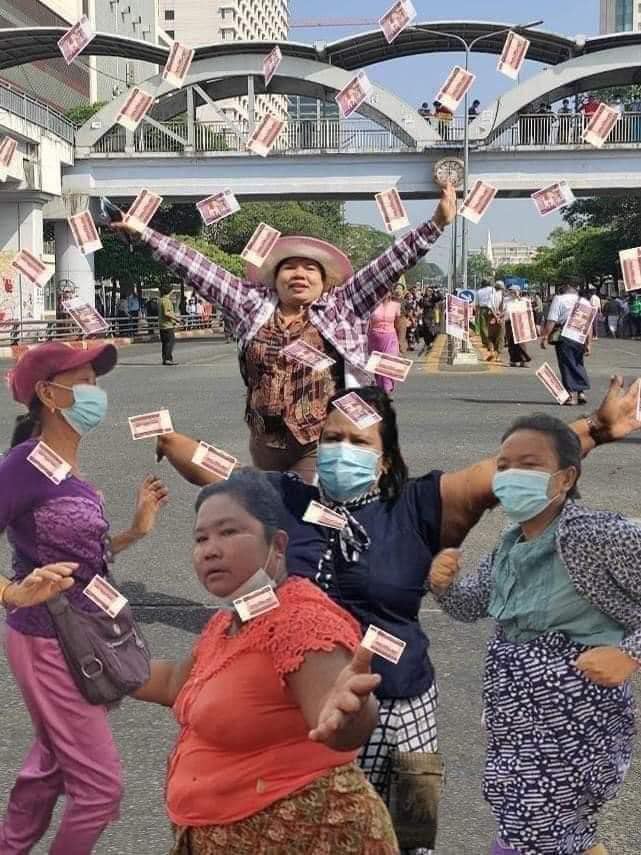 A collage meme making fun of paid junta supporter demonstrators. Since the coup began, the junta has been hiring people to demonstrate in support of the junta. There is a public belief that they are being paid 5,000 kyats (3.50 US dollars) per day and thus, they are nicknamed ‘5000 kyats’. 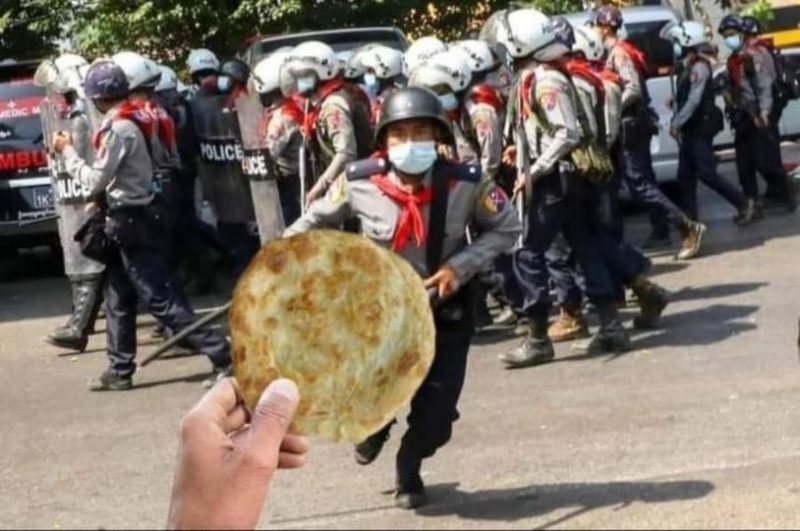 Meme making fun of riot police featuring a paratha flatbread, a reference to the raid on the township of Tarmwe, Yangon on February 25, where soldiers seized and ate paratha from the cart of a street vendor who ran away. The original photo was taken by the journalist Sit Htet Aung, who captured the image as were police running toward him to hit him. 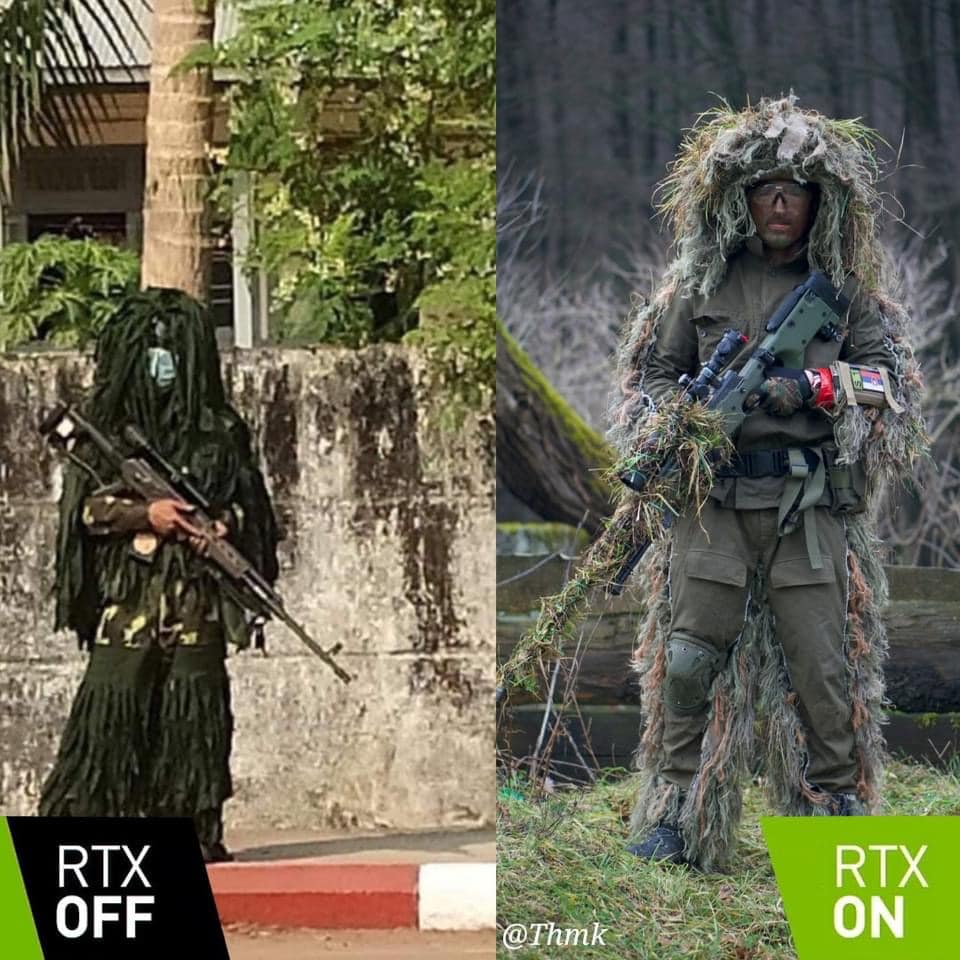