'We need to have rigorous conservation efforts in place' 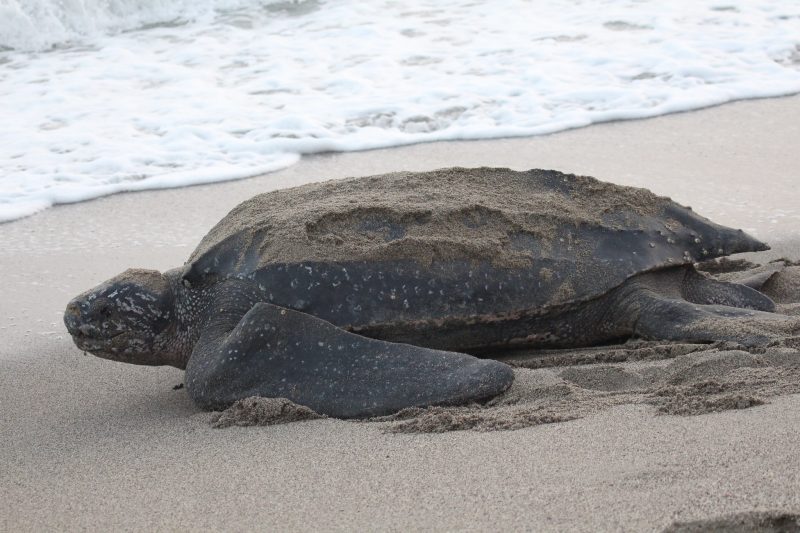 The following post by Nicole Vallie was originally published on Cari-Bois News. An edited version is republished here as part of a content-sharing agreement with Global Voices.

Leatherback turtle nesting season in Trinidad and Tobago, which runs from February to August each year, is well underway, but turtle conservation groups are up in arms after being blocked from doing nightly beach patrols to protect nesting sea turtles. Many of the groups were hoping they would be granted special exemptions from the country's COVID-19 restrictions which currently prohibit anyone from visiting beaches outside the hours of 6:00 a.m. to 6:00 p.m.

Minister of Health Terrance Deyalsingh justified the government’s stance at a press conference on March 8, at which he noted that the turtles should be sufficiently safe since “no one is allowed on the beach to poach eggs or to kill the turtles or ride on their backs.”

However, groups like the Turtle Village Trust, Las Cuevas Eco-Friendly Association, Nature Seekers, all located along Trinidad's north coast, and Environmental Research Institute Charlotteville, based in Tobago, all insist that active patrolling is still necessary to protect the Leatherback turtles, as well as other species. Incidents of poaching, they say, increased during the 2020 nesting season, and because turtles nest at night, those intent on harming them are unlikely to be deterred by COVID-19 restrictions.

In explaining the scope of the threat, the turtle conservation umbrella group Turtle Village Trust said that feedback they received from the communities of Manzanilla and Fishing Pond on Trinidad's east coast, and Las Cuevas, Blanchisuesse, Sans Souci, Grande Riviere and Toco on the north, reveal increases in incidents of poaching. The group was one of several that requested exemptions from the public health [2019 Novel Coronavirus (2019-nCoV)] (No. 4) regulations, which stipulate that beaches are to remain closed to the public from 6:00 p.m. to 6:00 a.m.

Arlene Williams, president of the Las Cuevas Eco-Friendly Association, noted that the Las Cuevas beach, which usually reports no poaching incidents for the entire nesting season, recorded eight in 2020. She is concerned that there may be even more this year and fears Minister Deyalsingh's statement may serve as an invitation to poachers. Environmental Research Institute Charlotteville president Aljoscha Wothke confirmed that there has been a significant increase in reports of night poaching in Tobago since 2020 when all-night patrol activities ceased because of the pandemic.

Chairman of Nature Seekers, Kyle Mitchell, explained just how much is at stake:

Trinidad and Tobago is the largest nesting site for the Leatherback turtles in the northwest Atlantic. Such global proclamations cannot be made without the data to back it up. We have a significant place in the turtle world and we need to have rigorous conservation efforts in place to determine if the population is increasing or decreasing and what interventions are required. With local data collections efforts being stalled for another consecutive year, we are not in a position to do that.

In 2020, Nature Seekers, as an “essential partner in conservation,” received permission to collect data on the Las Cuevas and Matura beaches as part of a collaborative project with Fisheries and Oceans Canada. However, because of the additional public health regulations that have been put in place since the start of 2021, its role in the project is up in the air.

In a letter to the minister of health dated March 9, the non-profit Fishermen and Friends of the Sea noted that communities across Trinidad and Tobago have, for decades, voluntarily engaged in nightly patrols to deter poachers. The group also sought to remind the minister that these groups often fall well below the prescribed limit of 10-person gatherings, and that their visits to the beach are critical in preventing the killing of an environmentally sensitive species.

The letter also noted that the Ministry of Planning and Development, cognisant of the gap in enforcement at state level, established the National Sea Turtle Task Force in January 2021. The move brought together government and civil society organisations to advise on the protection of marine sea turtles.

Under the condition of anonymity, an officer of the forestry division of the Ministry of Agriculture Land and Fisheries spoke to Cari-Bois and said that there are currently fewer than 20 game wardens responsible for the island of Trinidad. He suggested that designating honorary game wardens from local conservation groups would render much-needed assistance for patrolling the nation’s beaches.

The importance of a community presence on beaches was also highlighted by the Environmental Management Authority (EMA) in a March 10 press release, in which it stated that a “combined strategy of community-based patrols, presence of researchers, tour guides and the public during the nesting season worked well to stave off poachers.”

There are five species of marine turtles that nest on Trinidad and Tobago’s shores annually: the Leatherback, Hawksbill, Olive Ridley, Loggerhead and Green Turtle. In 2014, the EMA deemed all five Environmentally Sensitive Species (ESS), a designation that is supported by legislation under which the penalty for causing damage to sea turtles is 100,000 Trinidad and Tobago dollars (approximately 15,000 United States dollars) plus a two-year jail term.

There is currently an online petition circulating, which appeals to Prime Minister Keith Rowley to grant permission for nightly beach patrols. At the time of publishing, the petition had received almost 4,000 signatures. In the interim, conservation groups are urging concerned people to report any poaching activities to the police, game wardens, or the environmental police unit of the EMA.

Nicole Vallie is an environmental professional with an MSc. in Biodiversity Conservation and Sustainable Development, who has worked extensively with civil society organisations in the Caribbean to promote sustainable and responsible development.