As with its impact, 2011 revolt's mentions fade in school textbooks 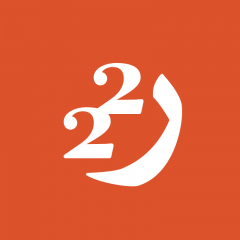 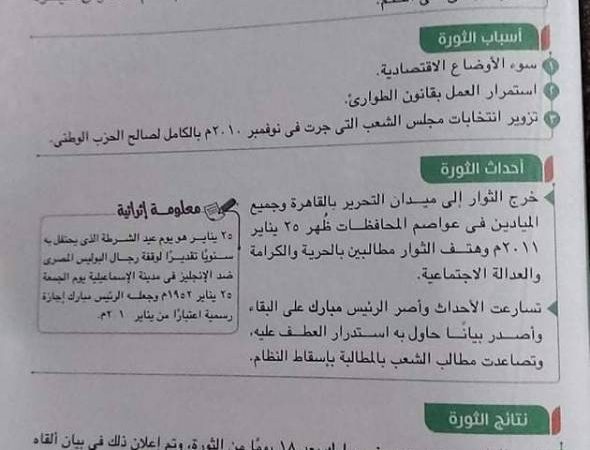 An image published by Raseef22 showing how Egypt's national curricula refer to the 2011. In bullet points, the syllabus lists causes behind the revolution as deteriorating economic conditions, the emergency law, and rigging of 2010 parliamentary elections. Very briefly, it sums up the events of the 2011 revolt as people flooding Tahrir Square and other squares acorss the country calling for freedom, social justice and dignity, and that it led to Hosni Mubarak stepping down. In a side note, the textbook also states that 25 January coincides with the national holiday day celebrating police forces. Police brutality and corruption was a key trigger of the 2011 uprising, which textbooks failed to mention.

This piece was first published by Raseef22, an Arabic media platform, on January 25, 2021, and was written by Reem Mahmoud. It is published on Global Voices via a content-sharing agreement.

If we were to browse the history textbooks of high school students in Egypt's state-owned schools today, we’d come across few pages about the events that unfolded during the 2011 revolution.

Including the events of Egypt's Arab Spring in the school syllabi began in 2012, but has changed drastically over the subsequent years in concert with the country's political power.

On the tenth anniversary of the 2011 uprising, Raseef22 captures how textbooks changed from detailing in great lengths all that had happened since the first eruption of the revolution, and how the squares overflowed with Egyptian revolutionaries seeking different social and political goals followed by former president Hosni Mubarak’s removal, to omitting much of the aforementioned specifics, and including “only the breadcrumbs”, as described by several of those tasked with drafting these textbooks.

In the current “Modern Egyptian and Arab history” curriculum taught to secondary level students, we're told that the January 25, 2011 revolution had preludes, which manifested in “the political opposition starting in 2004 to reorganize themselves in the form of political movements and blocs that appealed to the youth in order to bring down the ruling regime at the time, and the hold of the National Democratic Party on Egypt.”

The revolution, according to these textbooks, also had triggers: dire economic conditions, the ongoing state of emergency imposed by law, and the rigging of the 2010 Egyptian parliamentary elections in favour of the National Democratic party.

After a brief segment composed of two sentences about the revolution's events, the curriculum states that one of the outcomes of the revolution — in addition to Hosni Mubarak stepping down and the Supreme Council of Armed Forces’ interventions — is “a state of instability that engulfed the country, as a result of repeated and rapid ministerial changes as part what became known as the ‘transitional caretaker cabinet’.”

In an interview with Raeef22, Alaa Al-Iraqi, one of the most renowned history teachers in Egypt, recalled the varying frequencies by which the 2011 revolution was mentioned in Egyptian curricula from 2012 and onwards.

He said that, following the revolution, the eighth chapter of history books of the third year of secondary schools included a complete narration of the revolution and its triggers. In his opinion, the description was highly-accurate and was well-received by the students, many of whom were first-hand witnesses of the events of that period.

Al-Iraqi added that, following the protests of June 30, 2013, the curricula changed: Mentions of the 2011 revolution were superficial, former President Mubarak's achievements were removed, and the curriculum included the failures of the Muslim Brotherhood’s reign, as well as mentions of “the [2013] revolution, and how the military council — led by President Abdelfatah-Al Sisi — succeeded in getting rid of the brotherhood’s regime.”

“I hope that the narrative would shift back to the complete version that was there in 2012,” he concluded.

Insufficient documents with all the details

Professor Gamal Shakra, a lecturer at the University of Ain Shams and one of the editors of the history courses in Egypt's curricula, says that these syllabuses do not mention details of the 2011 uprising because of the unavailability of reliable documents on which they can rely on.

He added in his comments to Raseef22 that the narrative offered in school textbooks is within the context that “the revolution's triggers were the increasing poverty rates under Mubarak, and the collapse of the economy which led to the Egyptian uprising, then the corrective movement following Mohamed Morsi’ reign through the [2013] revolution of June 30, and the people’s will represented in the election of Abdelfateh-Al Sisi, the current president.” This narrative can be noticed in both history and national education textbooks, whether for middle or secondary levels.

In order to write all the details we had to obtain many testimonies from those who participated in the [2011] revolution, who are the youth that stormed the squares, as well as obtain documents from the Military Council. But these preconditions were not available to us, hence we resorted to mentioning the clear facts which convey the general context.

He concludes that “mentioning small details on the January [2011] revolt is the best option for now, given the absence of documents that could be relied on and its unavailability to the Ministry of Education. This is what we were taught as university professors and specialists.”

Echoing a similar view, Professor Assem el-Desouki, a lecturer of history in Egypt's Helwan University and the author of the current history curricula, said that he has taken part in writing Egypt's history syllabus since 1992, and that the few details describing the January Revolution had to be simple notes. Citing another example he said: “when the 1919 revolt was written about, we did not write the events in details, but mentioned the causes and outcomes, which is what we did with the [2011] January revolution.”

According to Professor Dessouki's comments to Raseef22, when writing curricula, it is not possible to quote documents that aren’t from the national archive, while media and press contents are considered secondary resources, as the news they offer are not complete.

He added: “This is why it is necessary to cite official news reports, or documents saved in the National Archives when writing the curricula textbooks, and these documents are released to the public only after 30 years of its events occurring, and therefore, all that is written about the 25 Jan revolution is only brief notes.”

Additionally, he said that in adherence to how history is written in curricula, details of the current president's period can not be mentioned, since he is still in office, and history must only deal with past events.

These opinions, according to head of the freedoms committee at the Press Syndicate Amr Badr, are “academic views”. He tells Raseef22 that those who wrote history textbooks, especially the parts pertaining to 25 January 2011, deny the progress made by the press, which impose an impactful reality and shape decisions.

Badr, who participated in the 2011 uprising, asked: “If content published on media platforms were professional and objective, and backed by a lot of evidence, why can it not be used as sources for writing history in syllabus textbooks?” He adds:

In Egypt, history is written solely from the official viewpoint, which is rejected nowadays in the era of social media platforms. Writing history is not exclusive to anyone, and should include multiple views.

We want to know the full detail of our history

Current and former Egyptian students have varying opinions regarding this topic. Some of  are very keen about the full details of 2011 being included in the curricula they study, and others do not pay much attention to it.

Mohammed Fouad, a student in the final year of the history department in Cairo University's Faculty of Arts, said that he felt great pride when the January revolution was mentioned in his secondary school history books, and added in his comments to Raseef22:

We observed this revolution and our parents witnessed it. Although I never took part in its events, I was aware of what was happening, and that is why we felt pride at its mention in our textbooks – because we had lived through these events.”

Fouad expressed his hope in teaching the complete events of the 2011 revolt as part of the national syllabuses, alongside 2013's uprising which, he said, enabled the people to get rid of the Muslim Brotherhood's regime. He added that this is the modern history that needs to be taught to current generations.

As for Amr Khalil, a student in the third grade of secondary education, the inclusion of details about the last decade of the country’s history is not of high importance to him, saying that he is indifferent about studying the 2011 revolution in schools’ textbooks, adding that: “If I want to obtain information about it, there are plenty of platforms online for that. As for school, all I care about is to pass difficult exams.”

Meanwhile, Mutaz Moustafa, who is a student in the third year of secondary school, was too young when the revolution happened, and was aware of what was taking place but not in great detail, and therefore thinks that what the history textbooks offer is insufficient, doesn't paint a full picture, and does not capture the youths’ taking to the streets.

“Many of our classmates, if they wanted to know more about what transpired during that year, they get the related information from online sources and not the Ministry of Education's textbooks. This is why I see it is important to address this milestone event in great detail in our history books, in order for the generations to know its modern history, take pride in it and of the Egyptian people’s ability to change its government.”