After a 28-year hiatus,  Kenya's national basketball team recently qualified [2] for the FIBA's AfroBasket 2021 tournament to be held in Kigali, Rwanda. “Team Morans,” as they are popularly known, were among the final qualifiers for the tournament, in Yaounde, Cameroon. They join other countries including reigning champions Tunisia, hosts Rwanda, basketball powerhouses Angola, Senegal and the Democratic Republic of Congo who will be competing in Kigali.

Kenya is renowned for its prowess in athletics, as well as rugby in team sports, but this time it was the country's basketballers who caught national and global attention.

Gidson Olda noted on the blog PearlRadio.com [9] that the Kenya campaign started off slowly:

The Morans began their final campaign to qualify for the Afrobasket tournament today but lost against Senegal 51-69 . The Morans who are under the tutelage of Australian coach Liz Mills were a much improved side from the previous qualifier and led the first and second quarter before surrendering in the third.

This loss motivated the team, with Australian coach Liz Mills at the helm, to give their all and in the second game caused a major upset, beating the more fancied Angola by 74-73 with a buzzer-beater from Tylor Ongwae, a win that was summed up in the Afro News [10] blog;

“We started slowly but once we locked down on defence, we shut down their opportunities to score and that intensity flowed into our offense. We never gave up and we knew if it was close in the fourth and we could push to win it,” Coach Mills said during an interview at the team’s hotel on Sunday.

The news of the victory and qualification woke Kenyans up on February 21 in a frenzy of excitement, and goodwill messages including from Kenya's Head of State. Others who congratulated the team's historic performance included the Sports Cabinet Secretary Amina Mohamed who said [10] the Morans achieved a rare feat, proving Kenyan basketball has come of age.

“With the exceptional support of their technical bench, the Morans have consistently perfected their game and with consistent determination, defied all odds to qualify for the FIBA Afrobasket Championships slated for August this year” the CS said in a statement, saying that the ministry was very proud of Morans having come from behind in the first half to beat Angola, which is one of the finest basketball teams on the African continent, which is not a mean achievement.

The CS further said that the Ministry has fully facilitated all national teams to safely resume training to prepare for upcoming continental meets, international championships and the Olympic and Paralympic Games in Tokyo later this year.

Congratulations to the Kenya “Morans” for defeating Angola for the first time in the history of basketball in Africa (74-73) at the qualifiers for Afrobasket 2021! We are behind you all the way! @Teammorans [3] #MORANSTOTHEWORLD [11] @moscakenya [12] @JoeOkudo [13] @CASnoor [14] pic.twitter.com/Vw6bdjTSXp [15]

But the Morans’ victory wasn't the only noteworthy achievement that night. Liz Mills, the Australia-born coach, also made history by becoming the first female coach [17] to lead an African team to the AfroBasket tournament—and a men's team to boot! Mills bettered a previous record held by Beninois Brigitte Affidehome Tonon who was the first woman to lead a men's national team in Africa when she guided Benin to the regional qualifiers of the FIBA AfroBasket in 2017.

Having previously coached the Rwanda and Cameroon national teams as an assistant coach, Liz Mills was appointed in early 2021 to add the “X-factor” to a great run for the men's team. She had been appointed after the team's previous coach Cliff Owuor indicated he would not be available [18] for the February 2021 qualifiers.

Going into the qualifiers, Mills understood the weight of the assignment and the expectations of the nation. In an interview on the FIBA website [19], she said it is a culmination of 10 years working in Africa, having started as a club coach and eventually as assistant manager on national teams. 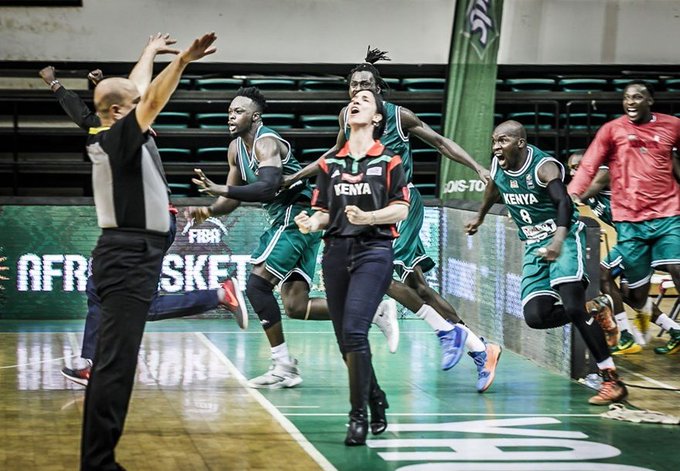 Mills revealed that she had given firm instructions that the ball be in Tylor Ongwae’s hands for the last play. The move worked as Ongwae made a jump shot with three seconds to the buzzer sending the Kenyans into ecstatic celebrations on the court. Ongwae, who had a brilliant game efficiency of +18, led the Kenyans with 16 points.

Morans player Tom Bush Wamukota said Ongwe has proved to the world that Kenya is not only known for athletics but other sports too.

Coach Mills said she was proud of the team and is looking for more than just to qualify:

“I’m personally proud of all the players. Next up is the AfroBasket in Rwanda in August and then we get straight to World Cup qualifiers,” she said, adding that Kenya is not going to Rwanda just to participate.

Mills now leads the Kenyan national team to the tournament proper, and she paid homage to the trailblazers in a tweet as shown below;

Thank you @yndoye35 [20] ?? I've always been proud to coach in Africa & thankful to Africa, & specifically @Teammorans [3] , for giving me the opportunity to be the first female head coach of a men's team at a major @fiba [4] continental tournament ?❤@FSBBOFFICIEL [21] @Basket_Senegal [22] pic.twitter.com/YaRhDhTyw4 [23]

She assumed the head coach role for the February 2021 #AfroBasket [5] Qualifiers! pic.twitter.com/BJVfWAfSAL [27]

Kenya's Morans joined 15 other teams which represent their countries in Kigali Arena at Rwanda's capital, Kigali from August to September this year.