Coup and resistance in Myanmar: A timeline of the first month under the 2021 military junta

What happened in the first month of the February 2021 coup 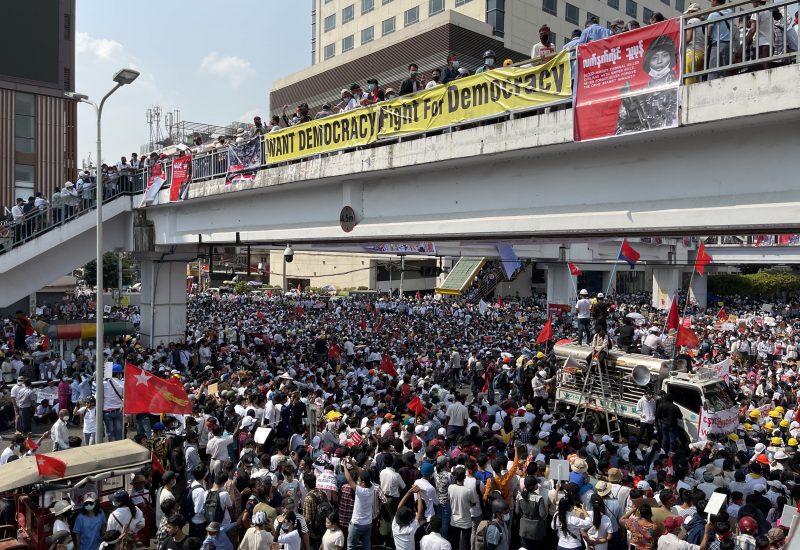 The General claimed the results of the elections were invalid, alleging that the ruling NLD had committed massive fraud.

The coup leader immediately declared a year-long state of emergency. On the first day, the military-appointed 11 ministers to an interim cabinet, and on the following day announced that it has formed the State Administrative Council, a government council comprised mainly of ex-military members.

Many citizens were quick to express their opposition to the Council, and have been pushing back with fierce resistance since day one of the coup.

The anti-coup movement gained momentum throughout February, with citizens engaging in online protests and acts of civil disobedience. The military responded with draconian laws, internet shutdowns, arrests, and violent crackdowns resulting in the deaths of protesters and even bystanders.

Here is a timeline of what happened in Myanmar in the first month of the coup:

Early in the morning of February 1, the day of the coup, phone and internet service from most providers were cut, and only fully restored after 3 pm that day.

In the first few days, some analysts advised people not to go out on the streets, fearing—based on the country's previous experience with coups—that a violent uprising could help the military legitimize their rule.

But protests spontaneously broke out across the country, and as the month wore on, the use of non-violent methods of expressing dissent became a core principle of the movement.

Civilians raised three fingers to show their defiance against the military, a gesture inspired by protests in neighboring Thailand, which  borrowed the gesture from the popular Hollywood movie “The Hunger Games.” The gesture quickly became a widely used anti-coup symbol.

On the second day of the coup, some residents of Yangon, Myanmar's largest city, took to banging metal pots and pans as a sign of protest each day at 8pm. This form of protest, traditionally known as “သံပုံးတီး”  (Than Pone Tee) or playing buckets, had also been used during the 1988 revolution against the previous junta. By the following day, it had spread across the nation.

Throughout the first week, vehicles on the streets in cities across Myanmar also honked their horns in protest against the coup.

On February 3, employees of 110 government hospitals began a civil disobedience movement (CDM) and enjoined workers in other government ministries and offices to join the movement known as the “Red Ribbon Campaign.” By February 4, the CDM had gained traction and massive support.

In order to quell the growing resistance, on February 4 the military council ordered internet and telecommunications service providers to block Facebook, the social media platform most widely used in Myanmar, then Twitter and Instagram the following day. The block has not been lifted as of the time of writing.

On February 5, parliament members from the ousted NLD called a meeting and formed the Committee Representing Pyidaungsu Hluttaw (CRPH) as a counter to the military council.

The period between February 4 and 6 saw small-scale protests led by students and activists erupting in Myanmar’s largest cities, Yangon and Mandalay. Some protest organizers in Mandalay were arrested.

On Saturday, February 6, around 10:30 am local time, the military ordered a nationwide internet shutdown. Service was not restored until noon the next day.

Despite the disruption of internet service, the protest movement had grown by Sunday, February 7 into larger demonstrations in at least 10 cities.

The morning of February 8 saw the first of many massive protests across the nation as students and civil servants from various ministries took to the streets.

UPDATE: Civil servants from the Education and Railway departments in Mandalay, the economic hub of Upper Myanmar, join citywide protests against the military regime on Monday. (Photo: The Irrawaddy) #WhatishappeninginMyanmar pic.twitter.com/Pds0nE7WTT

By that time the CDM movement has also become very strong well organized: the national health service, for instance, had come almost to a standstill. Several regional CDM support teams were set up to provide funding and legal services.

A small number of police officers defected and joined civilian protests in Loikaw, Dawei, Naypyidaw, Mandalay and other cities.

An iconic photo during Naypyidaw protests. The police officer who switched to the protesters’ side gave a speech to the crowd, calling for the “fall of dictator Min Aung Hlaing”, the country's army chief and coup leader. #2021uprising pic.twitter.com/6wBN0WTxGK

On February 11, the military council threatened media organizations not to use the word “coup government” in their reporting. Forty news agencies responded with a statement on February 25 that they would not comply.

The protests that started on February 8 continued every day in many cities across Myanmar. By February 17, according to news reports, 325 townships were holding daily demonstrations.

On the evening of February 14, military tanks paraded through the streets of Yangon. But people were undaunted and made fun of the tanks that broke down on the streets. The next day, protests continued in front of Myanmar's Central Bank near the location where the tanks were parked.

Starting on the morning of Monday, February 15, the Ministry of Telecommunications and Communications ordered all service providers to cut off internet service from 1 am to 9 am each day for one week. The restriction is still in effect as of March 5.

On Monday, February 15, all private banks announced they would close until further notice. Only a few government banks remained open, including the military-owned Myawaddy Bank, where people queued to withdraw their money as a form of boycott. The boycott forced some branches to close by February 19.

On the morning of February 17, car owners in Yangon staged a protest by pretending that their vehicles had broken down on the streets that morning. This was an attempt to prevent civil servants who had not joined CDM from going to work. Some days earlier, car owners had used similar tactics to bar the police from harming protesters.

On February 20, two people died in a violent shooting attack in Mandalay, but this did not deter Mandalay residents from taking to the streets in an even bigger protest the next day where instead of retaliating with violence, they sat in the streets holding leaves of the Eugenia tree. The event was dubbed the “သပြေညိုတော်လှန်ရေး,” or “Light Brown Eugenia Leaves Revolution.”

On Monday, February 22, people took to the streets again in a nationwide general strike, All shops and businesses in the country were asked to close on that day. The event, dubbed “နှစ်ငါးလုံး တော်လှန်ရေး” (“22222″ or the “Five-Twos Revolution”) took its name from the date 22/02/2021, inspired by the 8888 uprising against the military dictatorship on August 8, 1988.

Also on February 25, a group of junta supporters marched in Sule, Yangon's business district, holding placards with pro-Tatmadaw slogans and some wielding weapons. They clashed with locals and [WARNING: GRAPHIC IMAGERY] attacked passersby.

On February 28, strike organizers called for another nationwide protest to recognize the support Myanmar's democracy movement has been receiving from Thai and Hong Kong protesters linked to the Milk Tea Alliance protest movement. The Hong Kongers even shared a bilingual manual from the Hong Kong protests on social media.

Despite the increasing use of force, violent crackdowns, and arrests of protesters across big cities in the previous three days, protesters still came out in huge numbers on Sunday, February 28 to join the Milk Tea Alliance March On that day, the military responded with a deadly crackdown on the peaceful protests in at least five cities, the bloodiest violence since the movement began. At least 18 people were reported dead.

Political analyst Naing Aung has written a memo detailing the protest movement's achievements over the four weeks of February. In summary, he wrote, the nation has come together with “unity in diversity” across generations, ethnicities and religions. Civilian resistance has challenged the morale of those who use weapons, and the actions of the military have been strongly condemned both domestically and internationally:

The people of the movement have been strictly following the discipline of non-violence and for a long time the police and military could not crack down for the lack of civilian violence. What they are doing now is purely a crime. Using violent force on peaceful protesters is an international human rights violation; to the point of crime against humanity. They will be under trial soon.