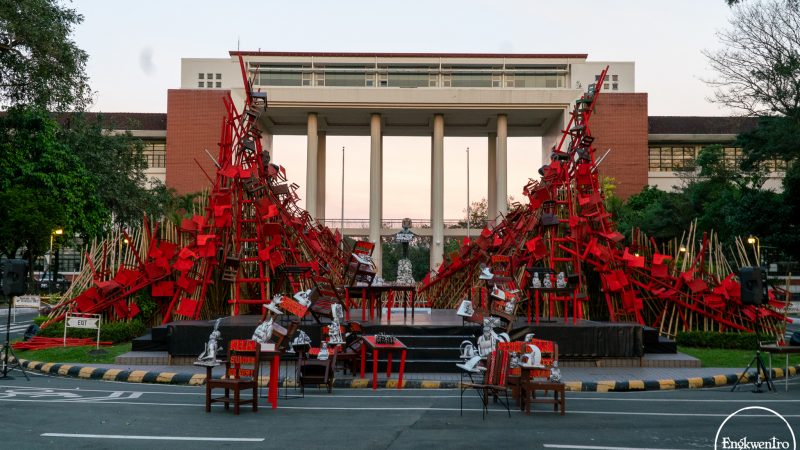 Protest art installation by Toym Imao for the 50th anniversary of the Diliman Commune in front of the Quezon Hall administration building, University of the Philippines Diliman campus in Quezon City. Photo by Pol Torrente for Engkwentro, used with permission.

A virtual exhibit spearheaded by the University of the Philippines (UP) Diliman through its Office for Initiatives for the Culture and the Arts (OICA) honors the legacy of the Diliman Commune. This historic event of 50 years ago saw students, faculty, staff and residents barricading the premier state university’s flagship campus in the national capital for nine days to defend against violent police incursions.

The virtual exhibit is entitled “Engkwentro: Sa(la)ysay ng Diliman Commune” (“Encounters: The Narrative and Sense of the Diliman Commune”) and is part of the UP Diliman Arts and Culture Festival held annually between February to April.

While UP’s commemorative activities were planned ahead of time, they gained added relevance amid the Rodrigo Duterte government’s targeting of UP as an alleged hotbed of “communist” rebel recruitment. The Department of National Defense (DND) Secretary Delfin Lorenzana on January 18 unilaterally terminated the UP-DND accord which prohibited military forces from entering campus without prior coordination with university administration.

A protest art installation by Fine Arts professor Toym Imao recreating the barricades of 1971 has served as the backdrop to protest rallies calling for the upholding of academic freedom. The installation is made of barricades of chairs, desks, and bamboo painted in bright red and towers in front of the administration building, Quezon Hall, a few meters away from the site of the main barricades set up along the university avenue 50 years ago.

On February 1, 1971, youth activists installed barricades on main roads along major universities in the national capital and surrounding regions to express solidarity with transport workers who were then on strike against rising oil prices. But at UP Diliman, the killing by a university professor of a student manning the barricades and the violent attempt by police to disperse the barricades spontaneously sparked a full takeover of the campus by protesting students.

Students, with the support of faculty, staff and residents declared the campus a “liberated zone” which they dubbed the “Diliman Commune” in reference to the Paris Commune, the 1871 workers’ uprising in Paris whose 100th anniversary was then being commemorated. They set up a “provisional directorate” coordinating the defense and governance on campus, reinforced the barricades, battled police incursions, and held their ground for nine days.

The “communards” took over the campus radio DZUP to broadcast radical messages and coordinate actions in the barricades. They also occupied the university press where they produced the newsletter “Bandilang Pula” (“Red Flag”) to disseminate their views and even produced improvised defensive weapons like Molotov cocktails, pillbox (homemade explosives) and kwitis firecrackers to shoo away military helicopters.

On February 8, the student-led provisional directorate decided to end the Commune after attaining some of their demands and in order to avert further violence from police forces. The barricades were torn down the next day, but the image of students barricading the country’s top university became a potent symbol of resistance against Ferdinand Marcos who would go on to declare himself dictator a year later in 1972. 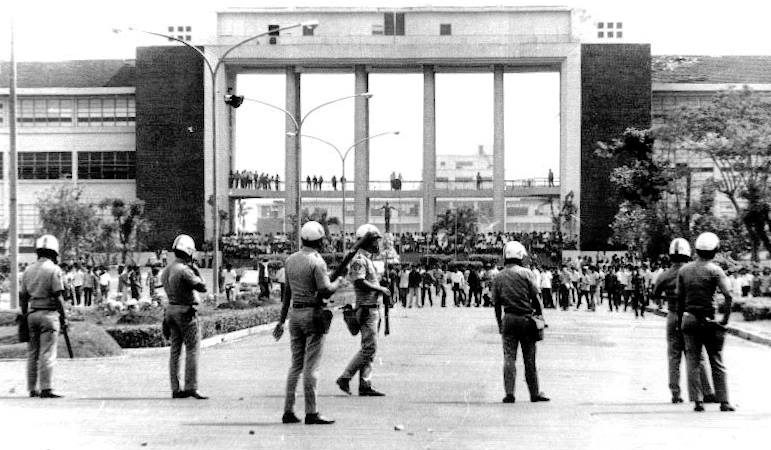 Students forming a human barricade in front of UP Diliman's administration building Quezon Hall to block the invasion of police forces on the campus. Photo from Arkibong Bayan, used with permission.

The exhibition was set up virtually under the direction of Dr. Cecilia De La Paz, head curator and OICA's director so visitors can relive the days of the Diliman Commune from their homes.

Written entirely in the Filipino national language, the exhibit details the day-to-day events during the Commune, based on archival research and interviews with key participants and witnesses. It interpreted these encounters through the lens of Filipino national hero Jose Rizal’s 1879 poem “A La Juventud Filipino” (“To the Filipino Youth”), which exhorted young people to offer their talents and intelligence to their country.

The archival material includes a digitized copy of the UP administration’s “Final Report of Committee of Inquiry on the Events and Occurrences at the Diliman Campus from February 1 to 9, 1971,” written eyewitness accounts, activist pamphlets and newsletters, newspaper clippings, photos, and even a recording of a broadcast by DZUP. 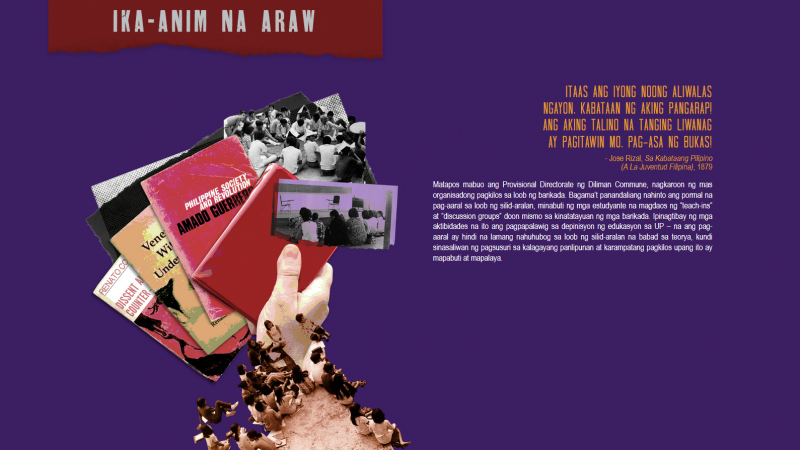 ‘The sixth day.’ Screenshot of a section of the ‘Engkwentro: Sa(la)ysay ng Diliman Commune’ virtual exhibit.

Alongside the historical narrative is an interactive map of the location of the events, based on a map drawn by Ar. Ringer Manalang of the UP Diliman Office of the Campus Architect and digitally rendered for the exhibit. Viewers can hover over or tap the icons and names of places on the map to show the events of each day:

The mapping of the events of the Commune is a recognition of the importance of the places involved in history of UP Diliman in this period – roads, classrooms, offices, dormitories, and places inside the campus that served as spaces for physical and ideological encounters. As the site of protest actions, these subsequently became spaces for the sacrifice of lives, of commitment to their ideological principles, of community tensions, and the use of art and science to “protect” the Diliman campus as a cradle of free thinking. 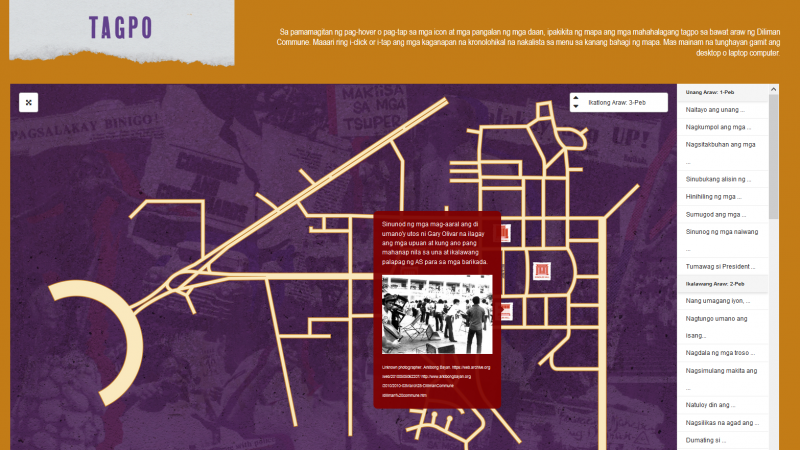 Legacy of the Commune

Apart from looking back on the events in 1971, the virtual exhibit explores the Commune and the decades of activist and intellectual foment in the 1960s and 1970s that prompted activism in academic work, inspired artistic and literary works, and underlined the need for asserting the university’s role as a safe space for free expression and intellectual discourse without fear of state repression.

One concrete expression of this legacy is the offering of Philippine Studies 21, the General Education subject in UP on the linguistic, cultural, and literary aspects of domination and people’s resistance during the Marcos dictatorship years.

As the Philippines continues to teeter towards full-blown authoritarian rule under Duterte, the narrative and historical lessons of the Diliman Commune should serve to inspire the continuing struggle for genuine freedom and democracy in the present.

Disclosure: The author is the head researcher for Engkwentro, UP Diliman’s commemoration of the 50th anniversary of the Diliman Commune.