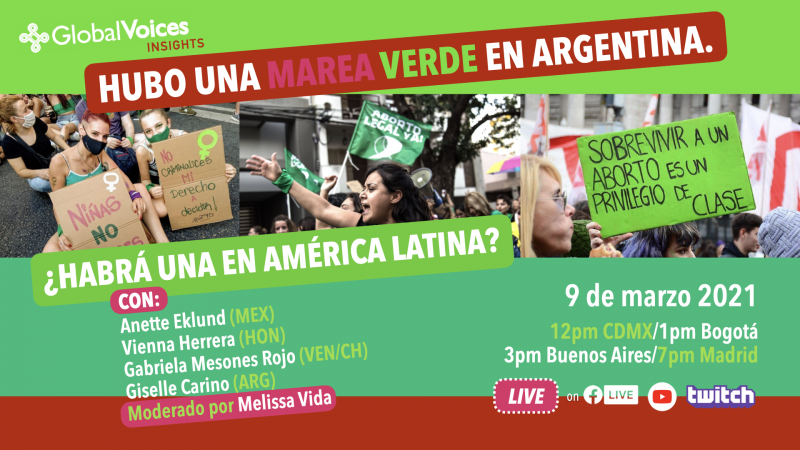 The legalization of abortion [4] in Argentina in December 2020 triggered a wave of debates on reproductive rights across Latin America. Several countries in the region impose a total ban on abortion; and in others where the practice has been fully or partially legalized, it faces strong backlash from pro-life groups.

Join us on March 9 for the latest in our Global Voices Insights [5] live webinar series, where a panel will explore the impact of the Argentina decision on the rest of Latin America, and attempt to answer the question: Will Argentina's “green tide” spread throughout the region, changing laws and attitudes around abortion?

The session, which will be conducted in Spanish and moderated by Melissa Vida [6], Global Voices’ regional editor for Latin America, starts at 6pm UTC [7] (12pm Mexico City and Central America/1pm Bogotá/3pm Buenos Aires/7pm Madrid), and features the following:

The session is free of charge and open to the public, and will be live-streamed on Facebook Live [11], YouTube [12]y Twitch [13].

We look forward to having you join us on March 9 at 6pm UTC (click this link [7] to convert to your local time zone)!