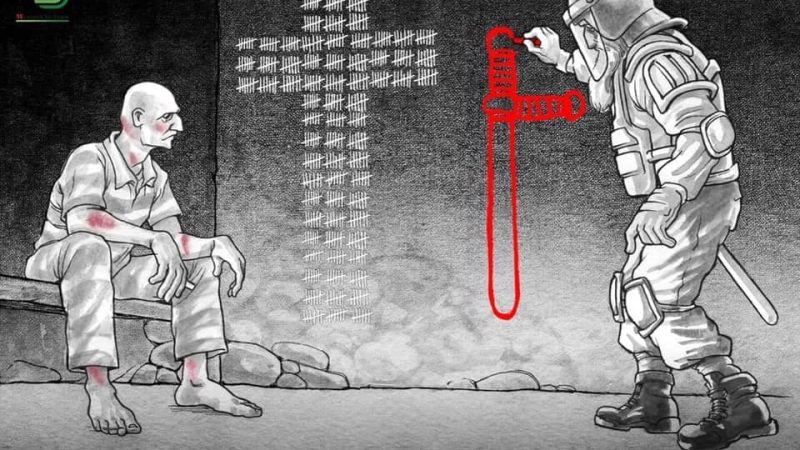 Cartoon by Sharok Heidari [1] on Iranian Christians’ resistance to the state's securitization of their status. Used with permission.

Lydia was 3 months old in 2019 when she was adopted by Sam Khosravi and his wife, Maryam Falahi, in Iran. At almost two years of age, and with serious health conditions, she was torn from her parents by a court ruling [2] in July 2020. The reason was that Khosravi and his wife had converted to Christianity from Islam, and could not, therefore, parent a child originally born into a Muslim family.

This legal case is a testimony of what human rights groups describe as the Islamic Republic's continued repressive policy towards its Christian population, especially converts.

According to Article 13 of Iran's constitution, Zoroastrian, Jewish, and Christian Iranians such as Armenians and Assyrians and not converts from Islam, are the only religious minorities acknowledged by the state, and are, within the limits of the law, free to perform their religious rites.

Christians in Iran are estimated to be between 500,000 and 800,000 worshippers, some of Assyrian and Armenian Christian ethnicities, but a majority consists of converts. This is less than one percent of Iran’s population of 83.5 million people.

In the appeal's court which upheld the ruling in September, the judge pointed out [2] that Lydia and her adoptive parents had an “intense emotional bond” and that the couple had provided the love and care needed for her to thrive. In his verdict, he added that the now almost 2-year-old would have no chance of finding another adoptive family due to her health issues. However, the court still went ahead with pulling the family apart.

Lydia's adoptive parents have also been targeted [3] by Iranian authorities in the past. Khosravi and his wife, Maryam Falahi, were among the Christian family members who got arrested in coordinated raids on their homes in Bushehr in July 2019. In June 2020, they were given a variety of sentences including prison terms, fines, work restrictions, and internal exile.

The Netherlands-based Hossein Ahmadiniyaz, one of  Lydia's lawyers,  told Global Voices that the family's request for a resumption of proceedings in the Supreme Court has so far been unanswered and while the toddler is still with her parents, the execution order to get her away has been issued. He added that he has written a letter on November about Lydia's case to Javid Rahman, UN special rapporteur on human rights in Iran, asking him to intervene. This letter too remains unanswered.

Ahmadiniyaz, who defended many civil rights activists and members of minority communities, explained that the executive and judicial authorities in Bushehr are subject to the whims of the security and political agencies. He told Global Voices:

In the cases of Christian converts in Iran, the judicial system itself — i.e. the court and the court of law,– become the main tools of repression and oppression, because the security agents in their report on the case urged such a decision. When there are no basic principles of fair trial and judicial independence, the law and the court become a decoration and a show, and even the recommendations of two Shiite religious authorities do not work. Even that does not spare the child.

Since 1979, scores of people of minority faith or religion, such as Bahais [4], Kurds [5], and Christians [6], have been sent to jail in Iran for “acting against national security” or “propaganda against the state.” This ranked Iran as the 8th worst country for Christians to live in by Open Doors [7], a Christian persecution watchdog based in the United Kingdom.

On January 12, a group of UN human rights experts, including the special rapporteur on freedom of religion or belief Ahmed Shaheed, wrote a letter [8] to the Iranian government, expressing “serious concern” over the systematic and widespread repression and “securitization” of the Christian minority in Iran, particularly those who have converted from Islam.

In its response [9] to the UN experts’ inquiry about 24 Christians being persecuted for their beliefs, the Iranian state defended its stance, arguing that the accused “acted against national security” — charges which the UN experts’ letter said reflect the “securitization of minority religions” in the Islamic Republic.

According to a February report [10] published by four Christian organizations, the post-1979 Iranian state “has been trying to impose a homogenous identity” on its people with an Islamic Shi'a belief system, “resulting in the repression of minority groups — their culture, traditions, religious beliefs and whatever else is considered a threat to the Islamic Republic and its values.”

The challenges Christian face in today’s Iran is rooted in the intolerant views of the Islamic revolutionaries who want to maintain a monopoly or a total control over every aspect of people’s life, and most importantly, the rights to choose one’s own faith and practice it. The disturbing reality is that the state increasingly resorts to more violent methods to marginalize, dehumanize, and eliminate unrecognized Christians.

Lydia's case stoked much controversy, both inside and outside the country.
An open letter [12] signed by 120 lawyers and civil rights activists was addressed to the head of Iran's judiciary calling him to annul Bushehr's court decision both against Iran's and international law. Citing several articles of the constitution, the letter read:

In particular, regarding the care and protection of abused or unaccompanied children, the constitution pays attention only to human and moral aspects, meaning that any Iranian citizen, regardless of his or her religion, can apply for custody of a child. Nowhere in these laws or regulations is there any mention of the religion of the applicant, but, rather, in the first place, being an Iranian citizen and of good moral character is the criterion for eligibility.

Mary Mohammadi, a Christian convert and human rights activist, who shared her prison story in “White Torture [19]“, commented ironically on Lydia's verdict in a tweet that said:

In the case, she was seperated from her family,the chance that another family adopts her is zero. The Islamic Republic's attitude towards  Christians is politely telling them:”Die”.

As the Iranian State rigorously vies to control the nation's identity, in part by clamping down on its religious minorities, Iranians’ attitude [27] towards and perception of religion has changed. A recent survey conducted by the Netherlands-based Gamaan organization, among literate Iranian residents aged above 19, shows [28] only about 32 percent of the Iranians consider themselves Shiites (official religion in Iran), approximately half of the population reported losing their religion.