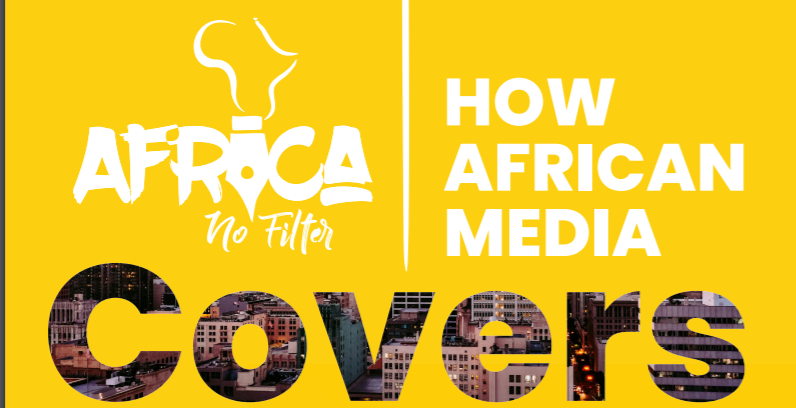 Over-reliance on international news wire agencies is the main reason why African media outlets continue to perpetuate harmful narratives about Africa, a recent study has found.

The “How African Media Covers Africa” report released in February 2021 offers a deeper understanding of why poverty, war, disease and failed elections continue to dominate media coverage in Africa. The report which sought to establish how African media in various countries cover stories from the rest of Africa surveyed people in the media industry to find out why this trend continues. Twenty-five senior media practitioners from seven African countries: Ethiopia, Kenya, Namibia, Nigeria, South Africa and Uganda and Tanzania—including foreign correspondents and senior African journalists and editors—were convened for focus group discussions.

The survey focused on what determines which stories are prioritized, the way stories on Africa are framed by African media, who tells these stories (African reporters or foreign press), what constraints bedevil reporting on Africa and what interventions are needed to eradicate the negative stereotypes of the continent by media in Africa.

Commissioned by Africa no Filter, a donor collaborative that aims to shift harmful stereotypes and misconstrued ideas about the continent, the report shares some insights into the underbelly of African media.

If it bleeds, it leads 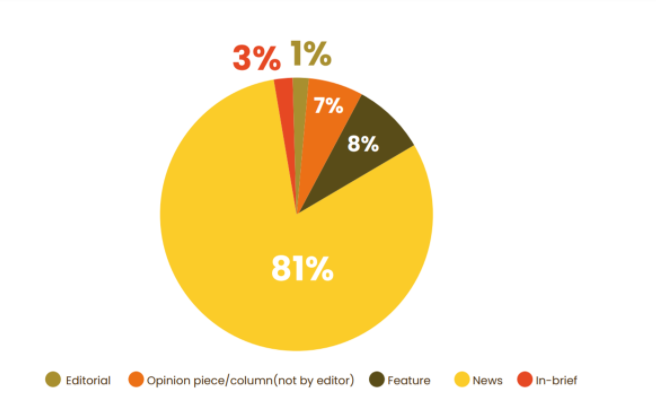 According to the report, many stories published by African media about Africa follow the “if it bleeds, it leads” trail. Politics, elections, and crises in Africa and other “hard news” stories, such as protests, dominate news coverage. Hard news, the report finds, accounts for 80 per cent of all coverage and dominates the coverage of Africa while features and opinion pieces only contribute 8 and 6 per cent, respectively.

Whereas the report found that some of the media reviewed dedicated sections for news from the rest of Africa, it noted that most almost exclusively restricted their coverage to local or national news. Forty-seven percent included events happening in other African countries in their news diaries while 11 per cent said they did not do so. Coverage by country is often concentrated on a handful of countries which the report noted is often heightened around elections. 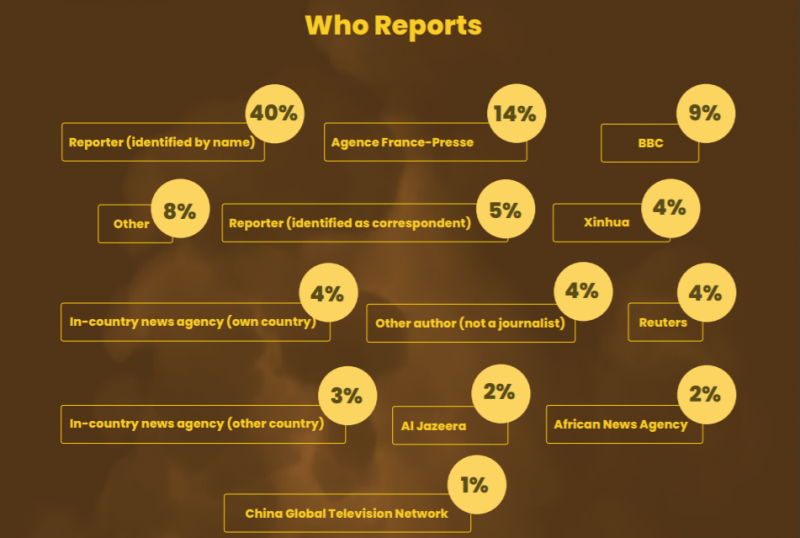 Sixty-three percent of African media outlets don't have correspondents in Africa, the report found. Their news stories are almost exclusively sourced from international wire news agencies whose primary audience is Europe. Agence France-Presse (AFP) accounted for 14 per cent of the stories; the BBC, 9 per cent; Reuters and Al Jazeera contributed 4 and 2 per cent, respectively. According to the editors surveyed, the supremacy of these news wire agencies is due to their offer of cheaper alternatives to maintaining a full newsroom and retaining foreign correspondents.

This cheaper alternative has come at a huge cost to how Africa is perceived both at home and on global news maps. This, the report found, has come at the expense of positive narratives such as the change that the youth of the continent are making. Also lost amid all the shallow news is the “Silicon Savannah” story of the continent’s innovators, whose stories are not being told by African media.

Only 45 per cent of the editors surveyed said that their publications had an Africa page. Fifty per cent agreed that there are stereotypes in the articles they run, despite their desire for more inspiring coverage:

“African crisis sells, but when local media positively changes how they cover stories, broader African media will pick up on that trend.”

- Sentiments of some participants in a survey focus group for the report.

Lack of funding and shrinking revenues

Lack of funding to write or produce original stories was found to be the biggest constraint. Editors also attributed the superficial coverage to shrinking newsrooms because of dwindling advertising revenues. Media publications globally have suffered reduced revenues because of the effects of the COVID-19  pandemic. According to Print Media Global Market Report 2021:

“The outbreak of Coronavirus disease (COVID-19) has acted as a significant restraint on some of the print media markets in 2020 following reduced circulation and dwindling advertising as businesses were disrupted due to lockdowns imposed by governments globally.”

The pandemic aside, traditional revenue models that have been the mainstay for print media globally have been imploding. A May 2020 Africa Portal article entitled “Journalism in jeopardy: Mitigating the impact of COVID-19 on newspapers” noted that:

“The traditional business model for newspapers, underpinned by advertising and circulation, has imploded. This is not a new occurrence or due to COVID-19: revenue from these two sources has been steadily declining in recent years due to the uptake of digital news and the challenging economic environment in many African countries.”

The report concludes with some recommendations from both the survey respondents and Africa No Filter, including:

The need for African media to rethink its business model is something that, though not captured in the Africa No Filter report, is inevitable and necessary for its survival. Paywalls and digital subscription models have become the new industry standard for print media globally. Unfortunately for African media, this shift to alternative business models has been more of a knee-jerk reaction that, for most, was triggered by the pandemic. Early this year, one of Kenya’s leading newspapers, Daily Nation, announced its adoption of a paywall.

However, as News24.com noted, paywalls won’t save journalism; it is good journalism and content that readers appreciate and are willing to pay for that will make the difference. This report makes similar recommendations regarding the importance of rich content that incudes diverse topics and the voices of more people. However, as the report notes, good journalism requires investment.