With 47 more charged, every prominent Hong Kong activist is now either in jail or in exile 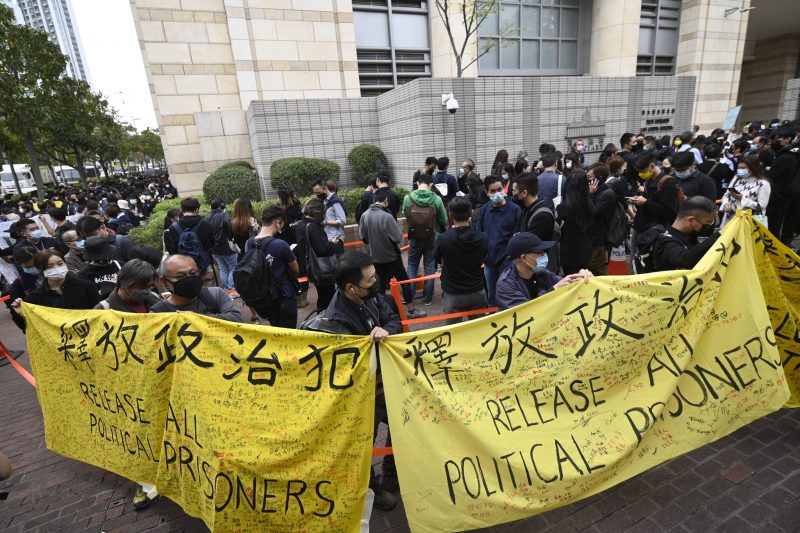 Hundreds protested outside a district court in West Kowloon in Hong Kong on March 1 where 47 pro-democracy activists were charged with “conspiracy to subvert the state power” under the National Security Law (NSL).

The charge relates to the activists’ organization of a primary poll for pro-democracy parties last July in the lead-up to the Legislative Council elections, which the Hong Kong government later postponed. They 47 will face a maximum penalty of life in prison.

During the hearing, which at the time of publication of this story was still ongoing, prosecutors have opposed bail, requesting instead a three-month adjournment for further investigation.

All other activists who have been so far charged under the national security law have had their bails rejected.

For months this was not seen in HK. But #now it’s happening at West Kowloon Magistrates Court – hundreds are gathering outside the court chanting slogans including “Liberate HK Revolution of Our Times” pic.twitter.com/btdfd5QLX4

In July 2020, over 600,000 Hongkongers cast votes in primaries which had the objective of selecting the strongest candidates from a cohort of pro-democracy parties. According to the charge document, the pro-democracy candidates, if elected, planned to veto the public budget, which would force the Chief Executive to dissolve the Legislative Council and eventually resign. That strategy, according to the document, constitutes “conspiracy to subvert the state power.”

The Hong Kong government then decided to postpone the September elections citing the COVID-19 outbreak. On January 6, 55 activists who helped organize the pro-democracy primaries were arrested and charged under the national security law.

Eight others, including lawyer John Clancey and former lawmakers Roy Kwong, James To, and Joseph Lee, have not been charged but are required to report to the police on May 4.

As described by UK-based human rights organization Hong Kong Watch, February 28 marks the day when almost all prominent activists in Hong Kong were either in jail or in exile:

Nathan Law says the charge indicates that the national security law is but a means to suppress political dissent:

4. You got it right — anyone who opposes govt's bill in Hong Kong now can be seen as violating NSL. Same as chanting certain slogans and showing some signs. Laws are weaponized to suppress the most basic human rights in Hong Kong. Freedom of expression has been quashed.

It is somewhat ironic that the day Hong Kong police charge 47 of the city's most prominent democracy activists with subversion happens to be February 28th — the day Taiwan marks the 228 massacre and the subsequent imposition of “White Terror” martial law.

Today, as #Taiwan remembers the #228 massacre, 47 pro-democracy leaders are charged with sedition in #HongKong. The resonance is striking. May todays’s commemoration in ?? be possible in ?? tomorrow. May ??‘s present courage inspire ?? to reach toward greater democracy. Amen.

Both the European Union and the United States have condemned the charges of the 47 activists.

Independent journalist Cheng Ci Ci noticed that a number of consulates had joined the crowds outside the West Kowloon district court:

Consulates from EU, USA, UK, Nevethlands, Germany, Sweden are all lining up for public seats. I said probably no chance for seats and they said they know but just here to line up. pic.twitter.com/YUnSSer7mZ

Despite the crackdown, many believe that Hong Kong people's will to democracy will survive. Such spirit is reflected in the messages charged activists sent to Hongkongers before they were taken to the detention center. Here are a few picks via Twitter user Eliot Chen:

Chu Hoidick: Today, to be guilty of our common ideals, I am deeply honored. I have received your well-wishes, and I wish everyone fulfillment each day. No matter the situation, fill everyone around you with love and with hope.

Jeremy Tam: Go peacefully, and be upright – sometimes it's hard to do both, and we can only work hard to practice the latter, and wish for peace in our hearts. History will stand on the side of justice, so sit straight, drink water, and dawn will eventually come.

Lester Shum: Do not feel demoralized, this road is our own. It is for Hong Kong people to choose together, it is the one we must walk together. History has no turn back points, only predecessors.

Ng Wai Kin: Remember to pay attention to the nameless brothers, to the Hong Kongers sent to China, relatives and friends. This land needs your support more than ever, remember not to bury your conscience, remember to come back to fight.

Andrew Wan: I have no fears, facing up to difficulties, I have hoped to demonstrate the strength of the wind. Respect yourselves! Remember your original intentions, no matter what may suppress them, be safe, and take care!

Carol Ng: To the very edge, you must stick to your ideals. The pursuit of a better society and the pursuit of democracy will never die, the labor movement will endure forever.

Lee Yu Shun: No matter the absurdity that they face, Hong Kongers must live well and live in the truth. I am proud to be a Hong Konger, I have no regrets.

Owen Chow: Whether we are in the streets, in prison or overseas, hope will always be needed for us to keep fighting this endless battle…Good luck to all of you out there.

Frankie Fung: With a clear mind, you have your own justice
Fight hard and to the end
I do not fear my own affairs
I only fear that there will be nobody to replace me