'Art is our weapon' 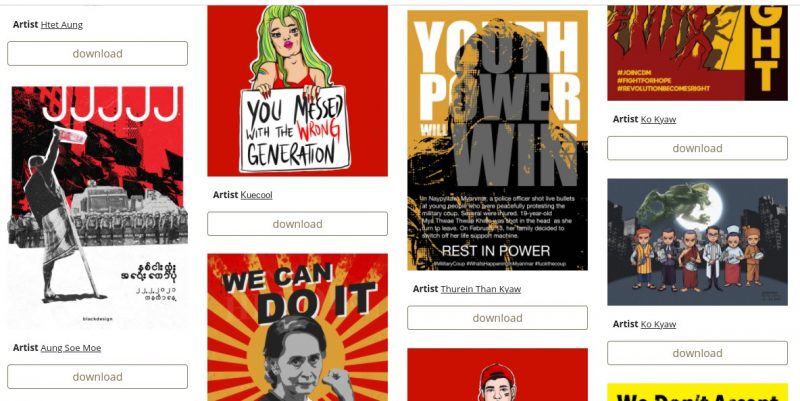 This post was originally published in Chinese on the Stand News on February 25, 2021. The English version is published on Global Voices under a content partnership agreement with the Stand News.

A group of 30 artists from Myanmar uploaded more than a hundred protest posters to the website yangon.design for free print and use by those rallying against the military coup.

In an interview with The Stand News, a representative of the artist's collective said:

Like all other Myanmar citizens, artists want to contribute to the national struggle… [we] can assist other protesters with our art. [Protesters] can bring the posters to the streets or hang them on walls.

The collective noticed that protesters were bringing placards with the illustrators’ art to demonstrations, and indeed many artists had shared their poster designs online for free.

However, these efforts so far have been decentralized, something the new website would like to amend. “We want to build a platform and collect high-quality designs for public access,” the collective representative told The Stand News.

Yangon.design was launched about two weeks ago. Once admins spot relevant protest poster designs circulating online, they will contact the artist and secure an agreement for distributing design.

The posters have attracted the attention of the “Milk Tea Alliance” online:

As we are #MilkTeaAlliance members, maybe we need some posters to spread #WhatsHappeningInMyanmar

Through the protest artworks, viewers can develop an understanding of Myanmar people’s aspirations. Below is a selection of posters with brief explainers: 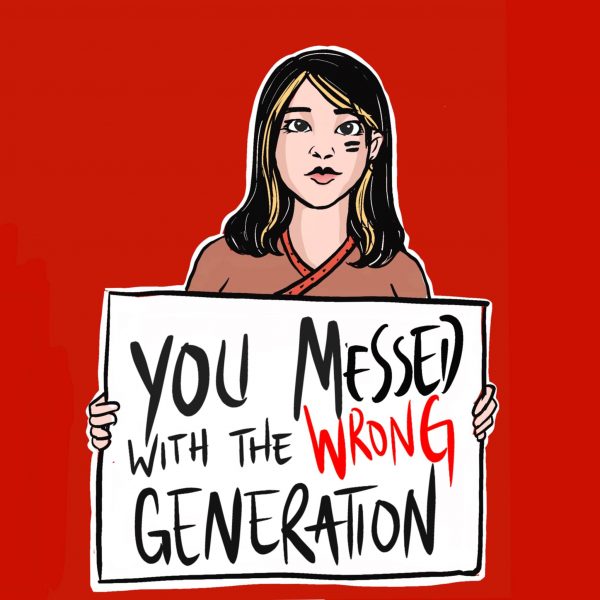 “You messed with the young generation” is the most popular slogan in the anti-coup protests, which have had a massive presence of young people. This slogan is often accompanied by “No! Not 88 anymore!” in reference to the 1988 uprising. Image downloaded from Yangon.design, free public use. 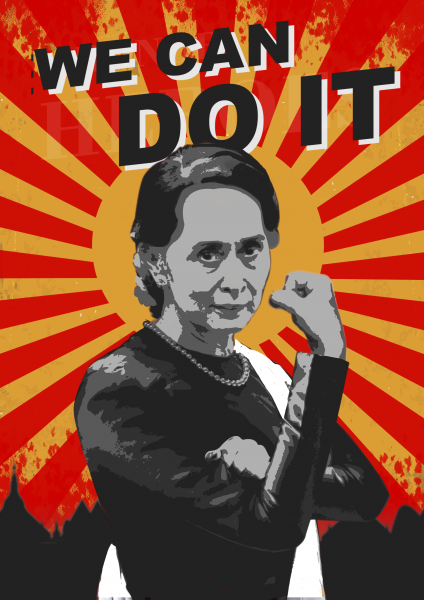 Aung San Suu Kyi, Myanmar democracy icon, continues acting as the spiritual leader of the current protests. She is detained and has been accused of election fraud. Image downloaded from yangon.design, free public use. 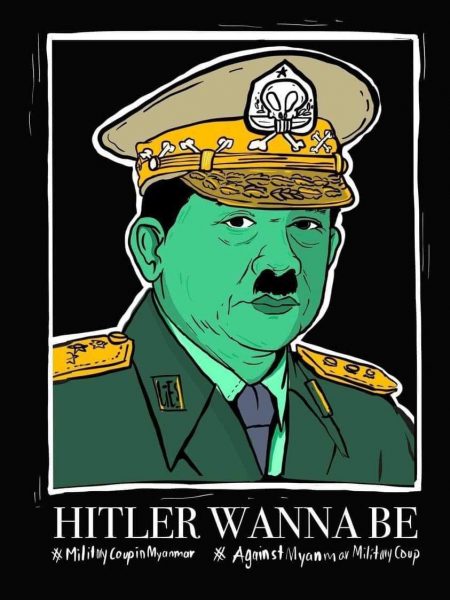 Myanmar anti-coup protesters compared military commander-in-chief Min Aung Hlaing to Hilter. Hlaing has taken power after the coup and, according to a report by the UN Human Rights Commission, he was the brains behind the ethnic cleansing against the Rohingya people. Image from yangon.design, free public use. 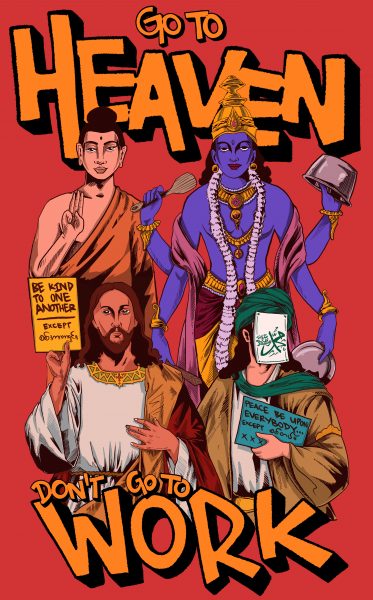 A poster in support of the general strike against the coup. Most of Myanmar's population is Buddhist, but there are sizable Christian and Muslim populations too. This poster suggests solidarity among different religious groups against the military coup. Image downloaded from yangon.design, free public use. 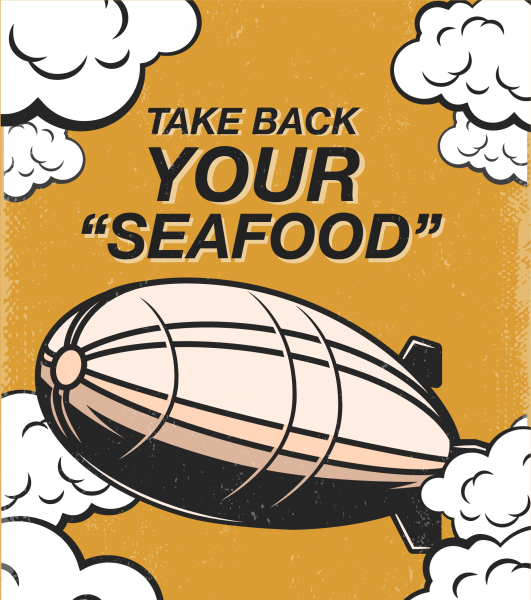 This poster is a response to the alleged involvement of the Chinese government in Myanmar’s military coup. Many protesters believe China has provided the military government with experts and equipment.
Image downloaded from yangon.design, free public use. 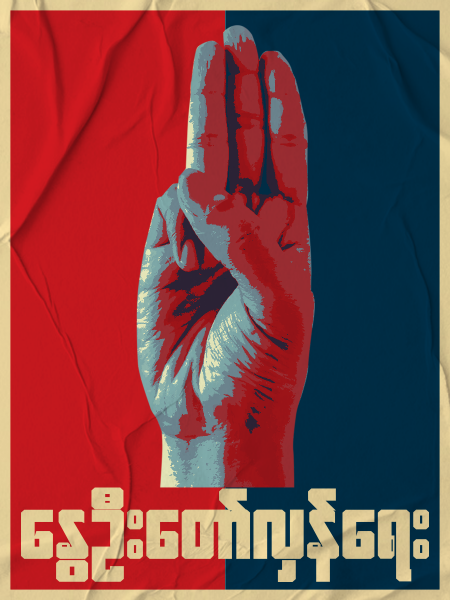 The three-finger salute from the Hunger Games universe, which represents solidarity in a dystopian world, was first adopted by Thai protesters and then by Myanmar anti-coup protesters. Image downloaded from yangon.design, free public use. 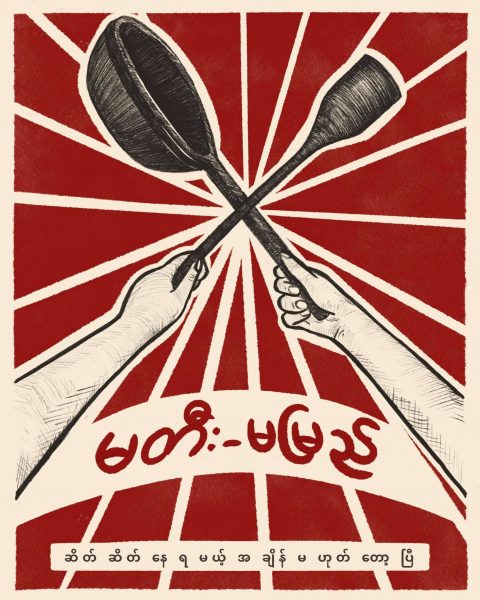 Urban residents bang pans and pots to protest against the military coup at night. The act is reminiscent of a Buddist tradition to drive out “evil spirits”. Image from yangon.design, free public use.