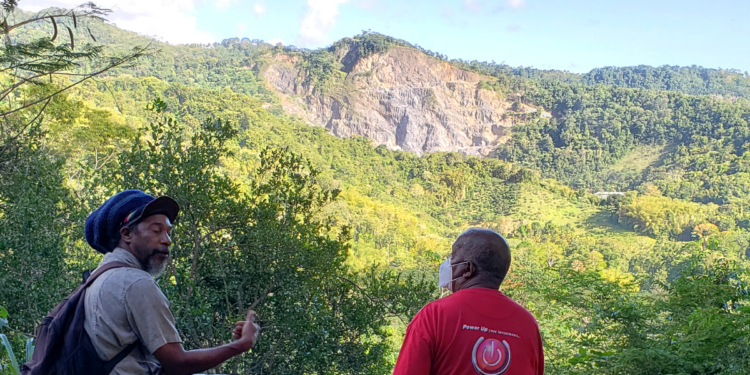 This article was written by Giselle Permell and originally published on Cari-Bois News. An edited version is republished here as part of a content-sharing agreement with Global Voices.

Frustrations are at an all-time high in the village of Acono where residents say they have exhausted almost every avenue available in their attempt to stop a new quarry operator from entering the Maracas Valley, along Trinidad's east-west corridor.

This is the third time the community, which has been dealing with the adverse environmental effects of quarrying for the past 70 years, has had to push back against efforts by Blue Diamond Quarries Ltd. (BDQL) to mine for blue limestone in the valley’s last untouched watershed.

Simeon Nakhid, vice president of the Acono Village Dynamic Action Committee (AVDAC), told Cari-Bois News that the residents won’t back down until the operator backs off:

The bottom line is, we don’t want any new quarry in the Maracas Valley.

Nakhid explained that residents already suffer from water supply shortages and fear that a new quarry may further aggravate the situation.

BDQL is currently pursuing an Environmental Impact Assessment (EIA) in order to secure the necessary permissions from the Environmental Management Authority (EMA) to mine in the La Caurita watershed of Maracas Valley.

The company sent us a statement which affirmed that it is “seeking to develop the
area” because of its “potential for economic development:”

Being in a global pandemic and with many countries pursuing opportunities for its citizens and economy, this is a direct local and foreign investment for both country and community.

One of the goals of BDQL is to be certified in LEED, ISO 9001, ISO 45001 and ISO 14001 in order to maintain global standards and to ensure all concerns of stakeholders are met. We intend to work alongside the community to develop the area and to ensure they benefit from this undertaking. We will create jobs for members of the community and upkeep the area as we operate.

However, the proposed site is located on the other side of a mountain top from another quarry, operated by Coosal’s Group of Companies. Nakhid cited the community’s experience with the existing quarry as their reason for opposing a new quarry in the valley:

I’ve seen how the natural environment in Acono has changed over the years because of quarrying and the community has had enough.

A company called Kairi Consultants Ltd. was contracted to engage the community in consultations as part of the requirement for the EIA, which included a cottage meeting held on December 19, 2020. The consensus among attendees was “No new quarry”:

Despite such opposition, the BDQL stated that it had received “constructive feedback and concerns from the community and [has] the support of the majority of residents.”

When we contacted several residents of Acono, many, like retiree Julie Reyes De Matas, pointed to the “nasty” state of the Acono River. Others, like system analyst Ray Francis, shared a more nuanced perspective:

On one hand, you need the quarry stone for buildings and construction, but then you have a community that feels you don’t care about them 'cause you won’t try to fix up the place after you get what you want.

AVDAC wrote to the EMA on January 14, 2020, detailing the major issues that the community had with the proposed quarry, including that:

The Acono River, the main drainage for the watershed that Coosal’s quarry occupies, is destroyed—muddy, dry and lifeless. It is so unfit for human use that it was diverted away from WASA’s [the Water and Sewerage Authority] intake. 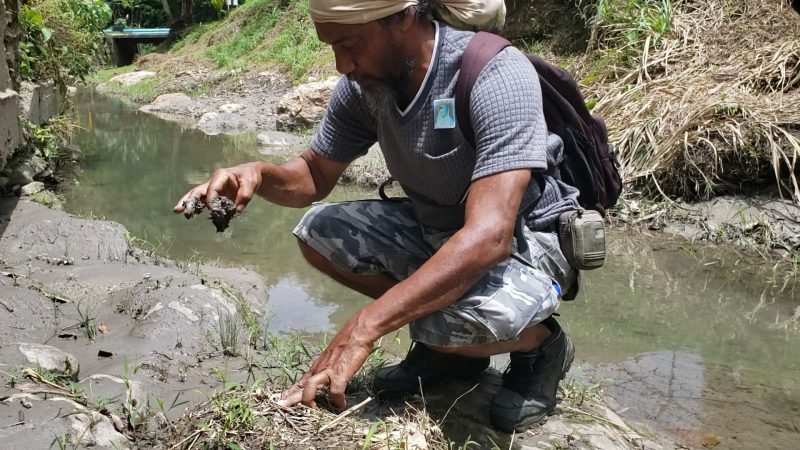 The letter further states that the Caurita River is now the community’s only dependable water source, flowing from the La Caurita watershed where Blue Diamond Quarries hopes to establish operations.

The proposed quarry would be located in the centre of the hiking trails to the Caurita Petroglyphs, the largest documented rock art site in Trinidad, described by the country's National Trust as being “an important spiritual place for the First Peoples or Amerindians in Trinidad.” The Santa Rosa First Peoples Community places special spiritual significance on this site and the surrounding area.

Other concerns include the destruction of community access roads and bridges which cannot withstand heavy equipment, runoff which would worsen the condition of the river and increase the likelihood of flooding, disruption to the life and safety of residents, many of whom live in homes close to the roadside, which would not hold up to heavy blasts within such close range.

The Maracas Valley Action Committee (MVAC) has also been vocal in its opposition, leading calls for pushback and collaboration with other groups within the community.

Both organisations stood against Blue Diamond Quarries’ 2016 attempt to mine in the valley. Simeon Nakhid said that he is now worried that even together, ADVAC and MVAC may not be powerful enough to stop the quarry this time around. He does not believe there can be a compromise and suggested that the community may have no choice but to take drastic action, like blocking access.

That, however, would be the last resort. They are instead exploring all available options. The letter his group sent to the EMA highlighted a 15-year timeline of resistance to the proposed quarry and called for all stakeholders to address the issues already plaguing the community as a result of quarrying:

Instead of facilitating any new attempts to exploit the valley, we urge the EMA and all other stakeholders to focus on improving and rehabilitating the environment […] through the restoration of the water courses available to us by damming the Concorde River upstream of Coosal’s and making it available to the Acono Water Works; by mandating ecologically appropriate rehabilitation of quarry lands to increase the resilience of the watershed; and by listening to the community when we say NO.

Copies of the letter were sent to Minister of Energy and Energy Industries Franklin Khan, Minister of Works and Transport Rohan Sinanan, Member of Parliament for Tunapuna Esmond Forde, the Water And Sewerage Authority (WASA), and Kairi Consultants Ltd., which responded:

We are conducting a neutral study. So we get information from the community as well as government agencies on the issue and we use that information to make our assessment.

BDQL says that at this stage, it is “solely conducting the required Environmental Impact Assessment to seek approvals from the EMA”:

This will then feed into how we set up operations in a conscious manner while
accounting for the needs of the communities. Lessons have been learnt from past operations and the concerns of the community are being addressed in our plans. These plans are dynamic and are being guided by the social and environmental assessments.

Meanwhile, the community waits to find out whether they are actually being heard and whether their concerns will be addressed.