The case involves harassment via stolen women and girls photos 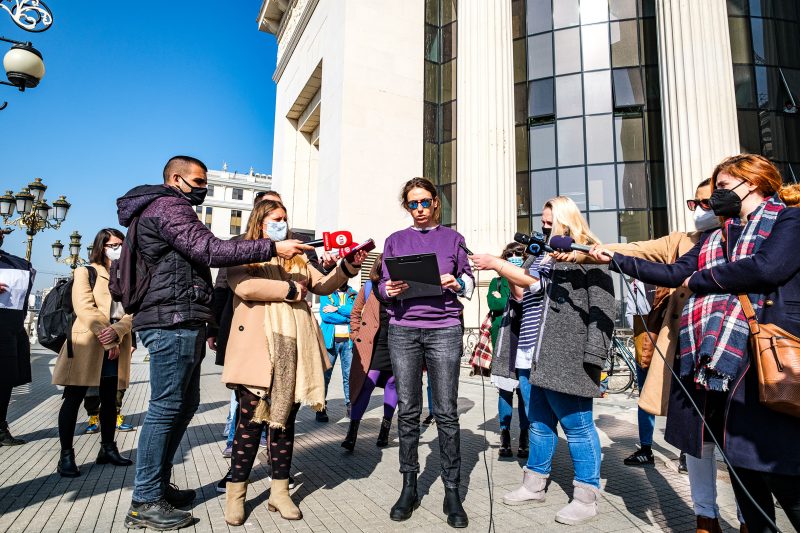 On February 24, the Gender Equality Platform, a network of civic organizations, held a media event in front of the Public Prosecutor's Office in Skopje, the capital of North Macedonia, demanding accountability for the justice system's inaction in investigating and prosecuting an organized ring of online sexual predators, and gender-based violence in general.

The case involves the use of a Telegram group called “Javna Soba” (“Public Room”) by thousands of people to share stolen photos and personal data of women and girls from North Macedonia, Serbia, and possibly other countries. The case remains unsolved over a year after it became a public scandal. The lack of judicial action has fueled public outrage, and this was expressed through a surge of online activism and a massive protest against impunity for sexual predators that took place in Skopje on February 3.

Activists have continued organizing smaller-scale events in order to prevent what they say is another round of cover-ups by authorities and lack of public awareness because of media inertia.

We demand efficient and effective protection for the victims of gender-based violence. Therefore, Ljubomir Jovevski, the Public Prosecutor of the Republic of North Macedonia, and Aco Kolevski, the Chair of the Council of Public Prosecutors, we remind you about your obligation to timely and effectively conduct the criminal prosecution of the perpetrators in accordance with the Criminal Code…

Having in mind the fact that the Prosecutor’s Office is the central authority for the prosecution of the perpetrators of these criminal acts, we believe that the proceedings about the violence against women and girls are not conducted in an expert and professional manner. Not a single measure for prevention of and protection from violence, will have the desired effect if the attackers are not being prosecuted criminally and avoid the responsibility of the criminal acts.

Kocevska said that, as organizations that provide free legal aid to the victims, it has been their experience that the Prosecutor’s Office does not adequately protect victims of gender-based violence. According to the Platform, the Council of Public Prosecutors does not effectively apply its power of control over the work of public prosecutors who deal with criminal proceedings regarding gender-based violence.

“We demand increased control over the work of the prosecutors in the Public Room case, as well as the prosecutors who are working on the proceedings about the violence against women. We demand consistent application of the internal rules that specify the obligations and the manner of conduct of the prosecutors in these cases, in accordance with the Law on Prevention and Protection of the Violence against Women and the Domestic Violence, and the Istanbul Convention,” Kocevska said on behalf of the Platform. 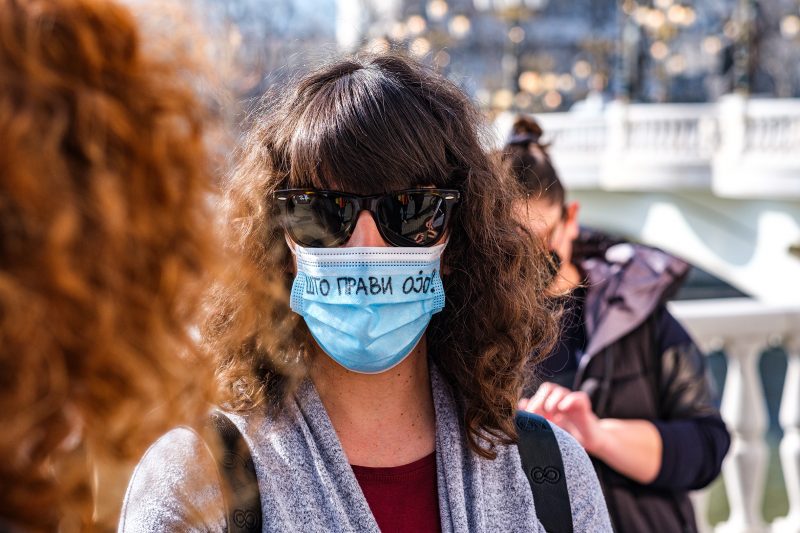 ‘What does the Public Prosecutors’ Office do?’ reads the mask of a protester in Skopje, North Macedonia. Photo by Vančo Džambaski, CC BY-NC-SA.

The Platform announced that they will not stop addressing the issue of the Public Room case and will continue protesting until March 8, unless the Public Prosecutor delivers tangible results about their concerns that will show that at last there is some action.

Organizers of the protests also pointed to the unprofessional conduct of some police officers, who they said often blame the victims and do not follow up on these types of cases, and who themselves are perpetrators of violence.

The Platform stressed that they will not accept responsibility to be transferred from one institution to another in this matter, and are insisting on comprehensive results before March 8, International Women's Day. They are also demanding criminal prosecution of the organizers and administrators of the Public Room Telegram group, as well as prosecution for all adult group members for a range of suspected felonies.

So far, the Public Prosecutor's Office has charged two alleged group administrators for only one crime—“production and distribution of child pornography.”

Human rights activists demand investigation and prosecution for the following acts covered by the North Macedonia Criminal Code: abuse of personal data; facilitating prostitution, threats to the personal security, or spread of racist and xenophobic materials by means of a computer system, depending on the circumstances of each case of shared content within the group. They also called for the inclusion of online sexual harassment in the Criminal Code. 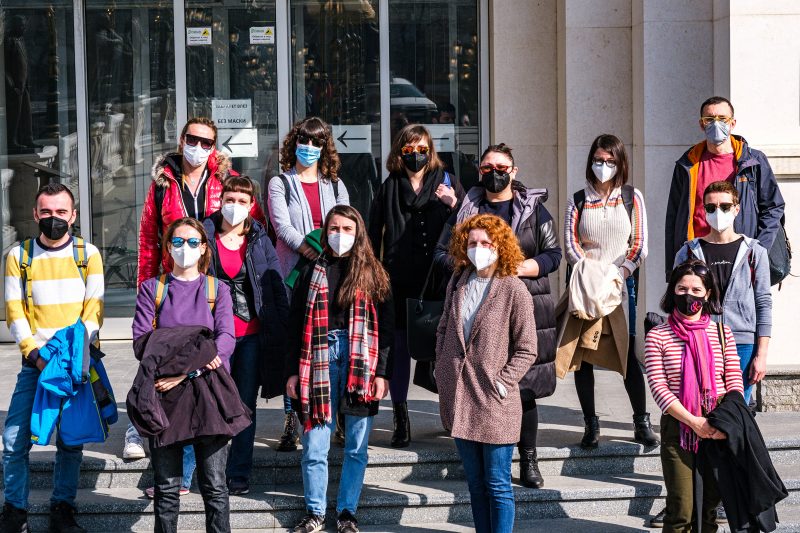 Previously, on February 17, the Platform held a press conference in front of the premises of the Ministry of Interior, demanding tangible results and a real willingness to proceed. They also expect the sanctioning of police officers who had been violent to women, who were found guilty of unprofessional conduct or failure to take action—and demanded professional training for police with respect to cases of gender-based violence.

After the press conference, the Macedonian Police Trade Union issued a statement asking the Platform to refrain from putting all police officers in one category because of the Public Room case. They stated that their members adhered to high professional standards of integrity, and gender stereotypes and prejudices do not influence their work.

At the time the Public Room case began in January 2020, a number of girls reported cases of abuse of their photographs, and the public was angered by the content that was being shared in this group. The case was revived this year after Ana Koleva publicly shared her experience of sexual harassment in that Telegram group.

Last year Meta.mk spoke to several experts in the fields of education, information technology and communications about the case. Vancho Ordanoski, the founder and the director of one of the oldest Macedonian IT companies, InfoProjekt, said it is no wonder that the Telegram app had been chosen for that purpose.

The choice of the Telegram app is not done naively, as it is used for sharing confidential information. Тerrorists have been shown to use the Telegram app. It is encrypted and no one can really know the identity of the users. The prosecution services cannot wiretap it.