'There is a stateless feeling' for those trying to get home; Part 1 of 2 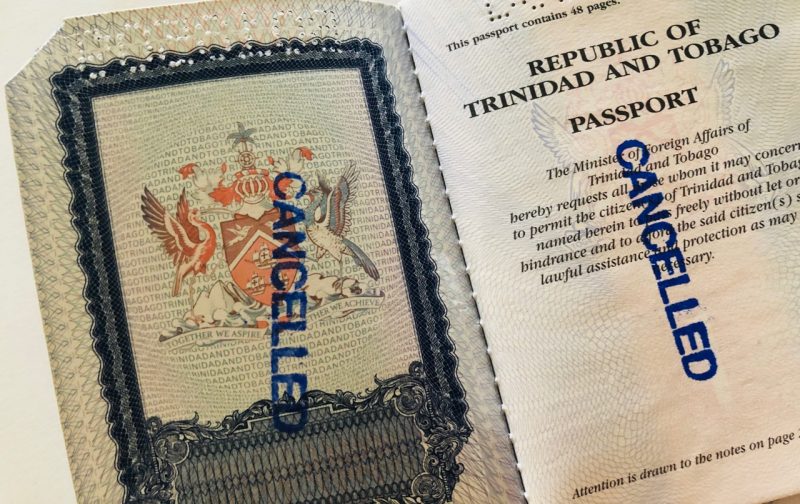 This is the first instalment of a two-part post. The second can be found here.

In an effort to deal with the COVID-19 epidemic, Trinidad and Tobago closed its borders to everyone but its nationals at midnight on March 17, 2020. By March 23, citizens abroad were also being barred from re-entering the country. An exemption application system, which now pertains to both arrivals and departures, was subsequently put in place but it is a process deemed a failure by many nationals stuck abroad, many of whom have unsuccessfully applied to come home—especially since those who applied under the initial process are now being asked to reapply under an updated system.

As they continue to wait, some have been forced to beg for or borrow money, rely on the kindness of friends or set up crowdfunding pages in order to survive. I interviewed several Trinbagonians who have found themselves at the mercy of the exemption process, in order to better understand their experiences and assess the challenges with the system.

One student enrolled at university in the UK, who prefers to remain anonymous, described her plight as being “stranded for over 300 days.” She had applied for a travel exemption to return home in May 2020 and finally entered the country in January 2021. “This is not a case of me being a ‘Trickidadian’ or making a false claim,” she says. “It was traumatic being the only person left in dorms. My classmates had all returned to their various cities during the national lockdown.”

Fortunately, she was able to access mental health and wellbeing tools through her university but maintains that the experience of being ignored because of the travel exemption process made her feel reduced.

Prior to the pandemic, her parents would pay her tuition while she worked to make ends meet. However, Trinidad and Tobago’s initial lockdown brought financial hardship to her family and she herself grappled with job loss in the UK. Forced to stay at a friend’s place, she contacted various Trinidad and Tobago High Commission offices until she eventually received humanitarian support from the government, which allowed her to pay the outstanding balance on her rent.

Despite Minister of National Security Stuart Young’s claim that the majority of nationals have been repatriated, there are still citizens—many of them students—waiting to be approved.

“I wrote to the Minister of National Security as well as to the Heads of Missions in London and New York repeatedly, begging and pleading to return to Trinidad and Tobago, before finally receiving an acknowledgment from the Ministry of National Security that appeared to be generic.” These are the types of testimonials being shared in WhatsApp groups that stranded Trinidad and Tobago nationals have established to communicate with one another.

While there is frustration, there is also a lot of gratitude being shared as members offer one another solace, practical support and a sense of community. The groups also serve as a channel through which to exchange pertinent information.

Citizens of Trinidad and Tobago have a constitutionally enshrined right to freedom of movement and residence. Many who have not been able to see their homeland since the start of the pandemic say they feel marginalised and dehumanised by the process; some find the tone tantamount to bullying, leaving them asking whether the system favours those with means, leaving those with shallower pockets with ever-mounting debt.

Just being told to wait

Inconsistencies in communication do not help: at first citizens were told that exemption requests were being dealt with on a first-come-first-served basis; this later changed to a case-by-case basis, which felt grossly unfair to those who have been trying to return home for over 10 months.

Meanwhile, politicians, their family members and non-nationals were being granted exemptions to leave and enter the country, as thousands of citizens remained in the queue without even an official acknowledgment of their exemption requests. The owner of one company who was allowed to bring in foreign workers, however, suggested that singling out such exemption approvals as proof of inequity was tantamount to “political mischief” by the country's opposition.

Brandon Serrao, a Trinidadian who is making attempts to get home having completed his studies, thinks that all citizens should be treated with dignity and respect. Though not in a desperate financial position himself, he finds the new exemption application process anxiety-inducing. Recalling some of the stories shared by fellow nationals, some of whom have lost their homes and their jobs, Serrao says it’s almost as if the passport is worth nothing: “It is embarrassing and disgraceful that nationals are being treated in this manner. There is a stateless feeling.”

In an attempt to paint a clear picture of the reality faced by nationals abroad, he recently designed the TT Lockout Map, an interactive online platform showcasing stories of citizens stuck abroad. Viewers can select the various location pins to identify the various parts of the world where these nationals are located, whether they have received exemptions, and the nature of their experience. In our interview, conducted via WhatsApp, Serrao noted that citizens have confided they are afraid of speaking out about their experiences for fear of it having an adverse effect on their applications’ approvals.

In several cases, citizens who have been granted exemption approvals still have not been able to enter the country, as the process can be costly. Of those fortunate to be granted exemptions, a number of them are unable to afford flights, the required polymerase chain reaction (PCR) tests and exorbitant hotel fees often attached to quarantining and/or waiting for flights, since Caribbean Airlines (CAL), the regional carrier, does not always schedule their flights on the same day as arrivals from the U.K., for example.

One elderly couple, members of the WhatsApp group I was privy to, explained that they will not reapply for travel exemptions because of the high costs associated with the process.

Meanwhile, citizens abroad have continued to resort to borrowing or raising funds online in order to survive; some have fallen ill or even died because of the lack of medical access in the countries where they have been temporarily staying.

On January 31, 2021, after paying close to 500 United States dollars to travel from Barbados to Trinidad and Tobago, citizens were voluntarily repatriated using a Caribbean Airlines aircraft. Those who travelled from the U.K., in keeping with the new guidelines put in place since the COVID-19 Variant B117 became a concern, had to spend 14 days in state quarantine.

Rachel-Ann Charles is a Lecturer at Birmingham City University, School of Media in the United Kingdom.