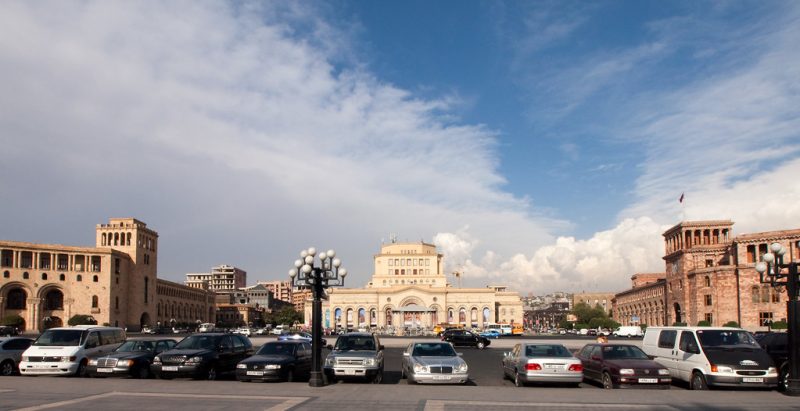 Victoria Andreasyan, a journalist working for Infocom, visited Armenia’s Syunik province on February 7 to cover the personal stories of residents living near the border with Azerbaijan. When she and her camera operator reached the entrance of the border village of Shurnukh, they were stopped at the checkpoint.

“Border troops told us we needed permission from the National Security Service (NSS) to enter the village,” she told OC Media. Three days after Andreasyan’s trip, the NSS announced that journalists needed permission to work in border areas.

After some negotiations, Andreasyan’s team was allowed in, but was “barred from talking to residents and shooting videos,” she said.

Andreasyan’s experience was not unique. Since the signing of the tripartite peace agreement at the end of the Second Nagorno-Karabakh War on November 9, 2020, the work of journalists in Armenia has been thrown into disarray by new and often vague regulations and laws.

In 2021, two separate bills on speech and press were presented to the Armenian parliament. The first bill entails a fivefold increase in fines for “insults and defamation” — ֏5 million (9,500 USD) ֏10 million (19,000 USD), respectively — and has already passed its first hearing in the legislature.  The second bill proposes to fine with up to ֏500,000 (1,000 USD) media outlets that quote as sources websites or social media accounts whose ownership is not publicly known.

The latter bill is widely acknowledged to be a response to the growing popularity of anonymous Telegram channels during and after the war, some of which had a pro-opposition bent and occasionally posted anti-government disinformation which was then echoed by established opposition media outlets.

A third draft bill, which has been proposed by Armenia’s General Prosecutor’s Office but not yet presented to parliament, would make it illegal “insulting or slandering a person in public service in connection with his/her performance of official duties.” Those found guilty would face a fine of up to ֏3,000,000  (6,300 USD) or up to two years imprisonment.

A number of Armenian media watchdog organisations, including the Media Initiatives Centre, issued a joint statement denouncing the bill as “a logical continuation of a number of legislative initiatives introduced by the authorities in recent months” that “envisage unacceptable restrictions on freedom of expression.”

“It is impossible to ignore the fact that officials and various politicians often perceive the objective criticism of the media as an insult, as slander, and try to take revenge through the courts,” the statement reads.

Shushan Doydoyan, the president of the Freedom of Information Center and Associate Professor Journalism at Yerevan State University, told OC Media that she believes these laws will backfire if they pass.

“Society has a demand for information, and it will find ways to satisfy that demand,” she said. “If journalists are banned from creating quality stories, the gap would be filled with gossip and fakes.”

Gegham Vardanyan, editor-in-chief of the Media Initiatives Centre, a media literacy NGO, told OC Media that the laws would only create a more hostile media environment. “A few years ago, even the Constitutional Court recommended courts avoid applying the maximum fines as it could be viewed as pressure on the media,” he added.

A consequence of war

The sudden shift in Armenia’s media landscape began with the introduction of martial law on September 27, the first day of the war between Armenia and Azerbaijan. Under martial law, Armenian journalists were forbidden from criticizing the actions of state officials or the performance of Armenia’s army.

According to Armenian law-enforcement, 13 media outlets and 62 individuals were fined before publication restrictions were lifted on December 2. While the restrictions were in place, roughly 600 foreign journalists received accreditation from Armenian and Nagorno-Karabakh authorities to report in Nagorno-Karabakh. Only one journalist’s accreditation was suspended — that of Ilya Azar, who published a strongly critical account of the Armenian military in the Russian independent publication Novaya Gazeta.

After the war, Karen Harutyunyan, editor-in-chief of CivilNet, harshly criticised the restrictions placed on journalists during wartime, which resulted in reporting that only “further dulled the public’s already foggy sense of reality.”

“The course of the 44-day war showed that journalists’ unrestricted work would have saved the country from much greater damage and tragedy,” he wrote.

After the end of the war, the country’s Ministry of Defence appears to have maintained its strained relationship with the media — particularly through silence. Numerous media organisations report that their freedom of information requests made to the Ministry of Defence were denied on the grounds that the information requested was a “state secret,” even when it was something as basic as the number of dead, wounded, and missing Armenian soldiers.

Shushan Doydoyan said that, ultimately, she fears that the degradation of the post-war information environment and the rash censoriousness of the government threatens media freedom, something “Armenia has gained with enormous effort over the years.”