Bloggers, journalists and creatives in the crosshairs of the Belarusian state 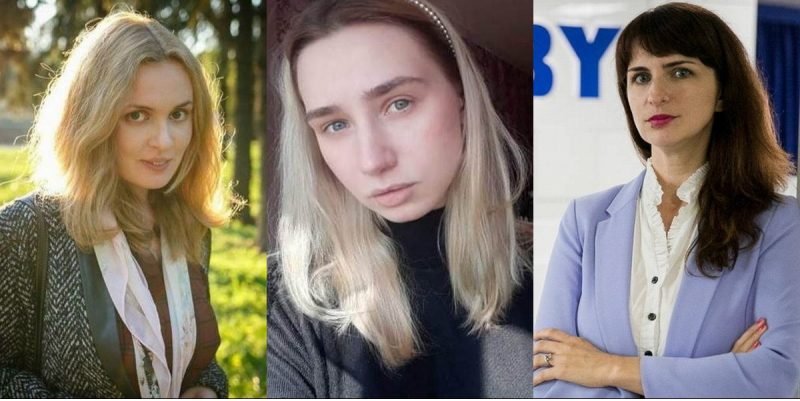 Belarusian authorities have now fixed their sights on bloggers, journalists, and the creative class amid the ongoing repression of the 2020 protests against long-time President Alyaksandr Lukashenka.

Since last August, thousands of protesters have been detained, many of whom have received fines and even criminal sentences for “breaching public order,” and among them are those who have received harsh punishment for online posts and media coverage of the rallies.

The wave of public discontent against Lukashenka erupted in August after the president attempted to secure his sixth consecutive term in office, and has since continued with varying intensity. Exiled opposition candidate Sviatlana Tsikhanouskaya continues to demand Lukashenka's resignation and a re-run of the election which she is widely believed to have won, but Lukashenka himself hasn't budged, instead offering constitutional reforms and other half-measures.

Meanwhile, the state has continued its crackdown on street rallies and criminalization of expressions of public outrage. On February 18, multiple Telegram channels leaked what is allegedly a draft bill proposing an expansion of the legal definition of “extremism,” Radio Free Europe reported.

Under the proposed changes, Belarusian state security services would maintain a roster of individuals and organizations deemed “extremist.” Those blacklisted could be prevented from holding their job, performing large financial transactions without government approval, or engaging in medical, educational, or publishing activities.

Four and a half years in prison for vlogging

On February 5, a Minsk court sentenced local blogger Pavel Spirin to 4.5 years in prison for two vlogs critical of Lukashenka's regime. One of the videos reported on drug trafficking in Belarus, while the other one commented on the August 2020 protests and police brutality against participants.

The prosecutor charged the 36-year-old blogger with “intentional actions aimed at inciting racial, national or other social hatred” (per part 1, Article 130 of the Criminal Code of the Republic of Belarus).

The blogger, who has spent more than five months in pre-trial detention since September 2020 and hasn't been allowed family visits, says he has been subjected to “maximum humiliation.” Speaking in court on February 5, Spirin said that his vlogs were “mere criticism, however harsh:”

For instance, the [state-owned–ed.] newspaper of Alyaksandr Lukashenka's administration publishes 300,000 copies and criticizes much more harshly then I do, by calling for taking children away from protesters and comparing them to fascists. And no one is accusing these journalists and editors of inciting hatred, it's just harsh criticism.

Journalists Daria Chultsova and Katsiaryna Andreyeva were sentenced to two years in a penal colony by a Minsk court on February 18. The women were detained while broadcasting live a violent dispersal of a rally on November 15, 2020. Chultsova and Andreyeva, both of whom work for independent TV channel Belsat, were charged with “organizing actions that grossly violate public order, and actively participating therein” according to part 1, Article 342 of the Criminal Code of the Republic of Belarus.

Fellow journalist Hanna Liubakova tweeted that she expected more repressions against members of the press to follow.

#Belarus Brilliant professionals and talented journalists Daria Chultsova and Kaciaryna Andreeva have been sentenced to 2 years of imprisonment. In November,they were detained for live streaming from a rally in #Minsk. If no response from the West follows, there will be more pic.twitter.com/dFtH4ugAYt

Christian Mihr, head of the Berlin office of media freedom organization Reporters Without Borders, called the sentence “monstrous” and told Deutsche Welle that it signified a “new stage of escalating repressions”:

During the weeks and months since the start of the protests after the August presidential elections we saw multiple journalists arrested, but in all cases these were short-term detentions of up to 14 days, for instance. But today for the first time since August, we're talking about a sentence whose length is measured in years.

The Belarusian Association of Journalists (BAJ), a local organization tracking press freedom violations in Belarus, reports that a total of 10 media workers are currently detained and awaiting trial or serving sentences for their work. Among them is Katsiaryna Barysevich, a journalist with independent website Tut.by, whose trial began on February 19 and is ongoing. Barysevich, along with Artyom Sorokin, a doctor, stand accused of “disclosing a medical secret” (per part 3,  Article 178 of the Criminal Code of the Republic of Belarus), and face a potential sentence of up to three years behind bars.

According to the prosecution, Sorokin provided medical assistance to protester Raman Bandarenka, who died in police custody during the protests. Law enforcement officials initially said Bandarenka was drunk, but in her reporting of his death, Barysevich presented medical records (allegedly provided by Sorokin) that show there was no alcohol found in Bandarenka's blood at the time of his death, which human rights activists suspect was the result of a brutal beating by riot police.

Along with journalists and online influencers facing increasing pressure from the authorities, artists and other creatives who have voiced support for the protests are also feeling the heat, according to a new briefing by Amnesty International.

Some, like Pavel Latushka, the former director of Yanka Kupala National Academic Theatre, have had their contracts terminated. Others have faced worse. Folk singer and dancer from Mahilyov Vola Semchanka told Amnesty she has faced multiple arrests and fines since October 2020 for participation in “unauthorized” meetings, and continues to endure workplace harassment. The first time, Semchanka was arrested when riding her bike and spent seven days in detention. The second time, she was detained for three days and charged for “protesting with a song” while standing on the side of the road singing a lyrical Belarusian folk song during a peaceful protest.

“After my first detention I felt scared to come home, I slept at friends’ houses most nights. Now I’m used to living with this constant sense of danger. We are all ready to become victims of state persecution at any moment,” Semchaka has told Amnesty.

According to Aisha Jung, Amnesty's Senior Campaigner on Belarus, the authorities are “methodically destroying Belarus’s spirited cultural life and its most creative members, in an effort to suppress all vestiges of free expression and dissent.”

Despite continued pressure from the state that has seen many of them fined, detained or exiled, journalists, artists, musicians and online influencers continue to express their support for the protest and the opposition movement challenging Lukashenka.