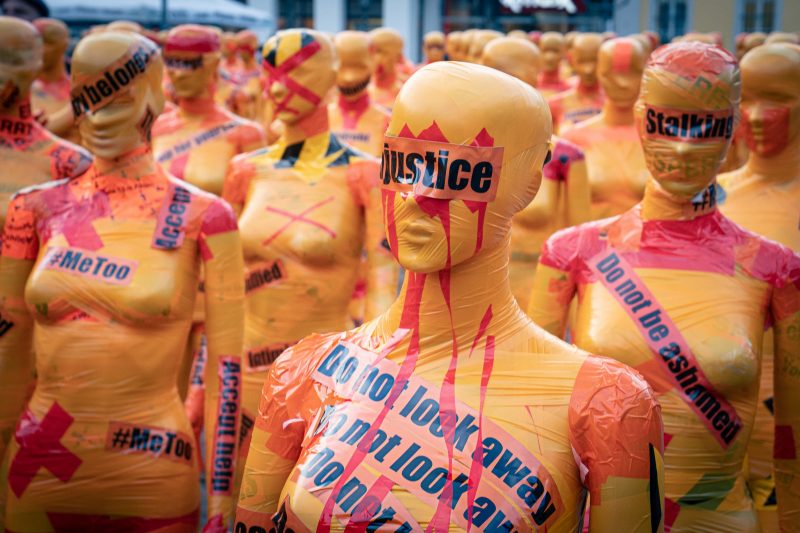 Photo by Mika Baumeister [2] on Unsplash [3]

Twenty-three-year-old Andrea Bharatt went missing [4] on January 29, last seen alive as she and a friend got into a taxi after work. The friend made it home; when Bharatt didn't, her father called her mobile. Eventually, a man answered and demanded money, though a ransom amount was never specified. On February 4, despite the efforts [5] of law enforcement and civilians alike, Bharatt's body was found [6] at the base of a precipice in northeast Trinidad.

Her murder prompted a national outcry, especially as it came just two months after the abduction of teenager Ashanti Riley [7], who herself took “public” transportation and ended up dead. (The car in which Bharatt was abducted bore a false hired car license plate.)

The Bharatt case, however, has been plagued by controversy. Two of the suspects have died [8] since being detained by police. The first, Andrew Morris—according to a media release [9] from the Commissioner of Police—died because of co-morbidities after having fallen off a chair. A private autopsy subsequently revealed [10] he was beaten to death. Furthermore, doubt has been cast [11] as to his involvement in the crime, as he told police he was only in the business of renting cars.

The second, Joel Balcon (aka Devon Charles), who had 70 charges [12] against him including rape and “grievous” sexual assault, died [13] in the intensive care unit of a public hospital. As many as 45 of the cases against him were pending at the time of his detention by police.

Such glaring missteps have focused the spotlight on the country's inept criminal justice system as well as its culture of misogyny and gender-based violence. For some, it has also revealed how citizens struggle to effect real change and the ways in which government processes often lag behind, despite protests and petitions:

National protest in #TrinidadandTobago [14] to end violence against women was ignited following the death of #JusticeforAndreaBharatt [15] and #justiceforashantiriley [16]. There is power in numbers. pic.twitter.com/9Nfkhtmm6X [17]

A history of violence against women

A 2002 United Nations (UN) report by the Committee on the Elimination of Discrimination against Women found that as far back as the 1990s, gender-based violence, including sexual attacks on women and young girls, was “pervasive” and had “long been a matter of grave concern for the Government.”

At the time, the government implemented a robust and comprehensive programme to specifically tackle domestic violence, but decades later, rates of gender-based violence are still predominant in the country.

Day by day, year after year, women are under attack. In 2014, senior counsel Dana Seetahal [20] was gunned down in her car, the victim of an execution-style killing. In 2015, television presenter Marcia Henville [21] was murdered in her home, reportedly the victim of domestic violence.

In 2016, after the body of Asami Nagakiya, a steelpan player from Japan who was visiting Trinidad and Tobago for Carnival, was found under a tree in the Queen’s Park Savannah on Ash Wednesday morning, then mayor of Port of Spain, Raymond Tim Kee, added insult to injury [22] by saying [23] “women have a responsibility to ensure they are not abused during the Carnival season.” Protests over victim-blaming ensued and the mayor eventually resigned [24].

Women are harassed on the street [25] and in their places of work [26]. By the close of 2016 [27], when 20-year-old bank employee Shannon Banfield went missing and was later found in the storeroom of a variety store in Port of Spain, people said [28], “Enough is enough.”

Yet, 2017 had barely begun when the first female murder of that year occurred, that of a schoolgirl [29]. Then, after the murder of Jamilia Derevenax [30], whose throat was slit by an assailant she knew, in the parking garage of a popular cineplex, Prime Minister Keith Rowley suggested that women should choose their partners wisely to avoid violence [31], demonstrating how well entrenched the victim-blaming response is, even as women [30] continued [32] to be killed [33].

A 2017 Inter-American Development Bank (IDB) National Women's Health Survey for Trinidad and Tobago [34] showed relatively high statistics for emotional, physical and sexual abuse against women, both in relationships and with “non-partners,” from a survey field of 1,079 interviewees.

More than 30 per cent of women, for instance, reported having experienced either physical or sexual partner violence or both, at least once. Close to one in three women experienced sexual violence, including rape, attempted rape, unwanted touching, and reported sexual violence. For many, this happened before the age of 18. The report also found that at 21.3 per cent, cases of non-partner sexual violence were almost four times higher than acts of sexual violence perpetrated by a partner (5 per cent).

The National Women's Health Survey laid out several recommendations for ways in which gender-based violence could be combated in Trinidad and Tobago—suggestions which echo those of many social media users—including more adequate spaces and services for women leaving violent domestic situations, procedural review, mandatory human rights, gender sensitivity, and on-the-job training for police officers (though there is a Gender-Based Violence Unit [36] in the Trinidad and Tobago Police Service), educational campaigns that “deconstruct some of the gendered perceptions that fuel male violence,” and trustworthy health services.

Some, however, realised that the root of the problem goes much deeper. After Bharatt’s abduction, activist “Tillah Willah” shared a video of the calypsonian Scrunter's 1979 song “Take The Number,” which advised women to make a note of the license plate of any car they get into, commenting [37]:

Scrunter sing this in 1979. 2021 come and allyuh still blaming women if they can't figure out what a predator looks like instead of changing the way we raise boys to think women's bodies are property.

Writer Debbie Jacob, who runs an educational programme for prisoners, feels [38] change needs to start at the top:

Police and prisons are not functioning anywhere near the level they should be functioning. We choose to perpetuate irrelevant education and throw people — innocent and guilty — into prison, which is basically a school for crime. We don't have enough educational programmes, skill-based programmes and rehabilitation programmes are virutally nonexististent in prisons. We don't have any rehabilitation programmes for sexual offenders in our prisons. We are not holding anyone accountable in this country. We don't care about people being in prison to study the craft of crime for over a decade before the courts that can't hear cases fast enough throw the case out. And those of us who are trying to address the crime problem and offer solutions can't get traction or consistency to function. Dysfunction and apathy prevail in this country with periodic outbursts of anger and disgust when a crime occurs. Victims deserve better than this. Start asking questions at the top. What is being done?

Since Bharatt's murder, parliament has passed [39] the Evidence Bill [40], which will introduce more modern mechanisms for evidence gathering in criminal trials. More controversially, pepper spray has been approved as a self-defense tool, though anyone who wants to purchase the product will require a permit [41] to do so.

Citizens understand that it is time for immense change, but with the above measures not really addressing the causes of the problem, the question remains: will those with the power to effect change make the necessary moves to protect women?