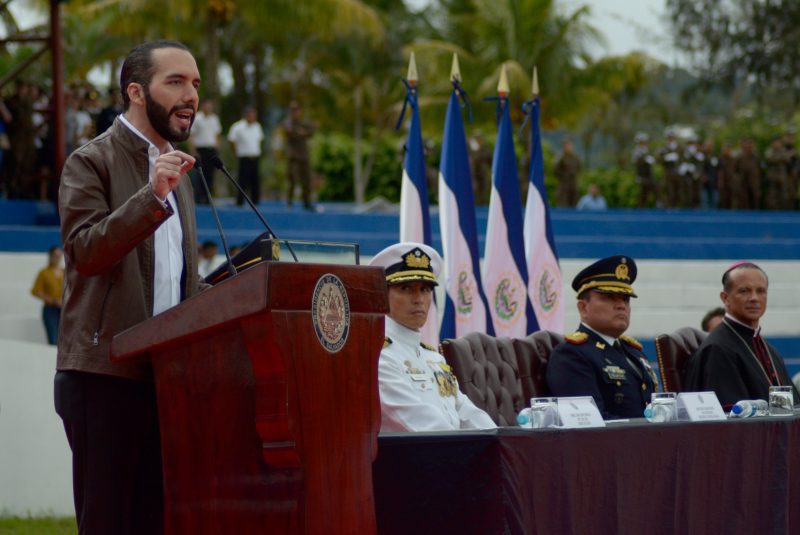 On February 6, 2021, CID Gallup released its first poll of the year regarding Salvadoran President Nayib Bukele and his job managing the COVID-19 pandemic. According to the survey [2], 91 per cent of Salvadorans approve of Bukele's performance in managing the crisis.

The February 6 CID Gallup survey is not the only one that shows how popular Nayib Bukele is in El Salvador. Since January 2020, 13 studies were conducted on the subject of the president's job approval or how he managed the COVID-19 pandemic; all of them gave Bukele an approval rating of over 75 per cent [3].

Yet, Bukele's actions have been criticized by human rights organizations [4] and the Organization of American States [5] (OAS) for increasing authoritarianism, such as his undermining of the country's democratic institutions [6] and verbally attacking the press. [7] For example, on February 9, 2020, Bukele entered [8] El Salvador's legislative assembly flanked by soldiers, a move that was seen by some commentators as an attempt at a militarized coup [9]. Bukele, meanwhile, sought to justify the intrusion, which had been carried out to pressure legislators to approve funds for his security plan [10].

In El Salvador – President Bukele called for an extraordinary legislative session to vote for a $109 million loan. Congress refused and now the El Salvador Military has taken over control of the legislative assembly#ElSalvador [11] pic.twitter.com/kRhRDYO7aC [12]

After an attack [14] on January 31 that left two opposition party supporters dead, Bukele suggested [15] that the political violence was a false-flag operation [16]. In the following days, US Congressman Albio Sires and Congresswoman Norma J. Torres sent a letter [17] to Bukele, expressing their concern and urging him “to convey messages of peace and to avoid stoking divisions and unrest.”

Why does President Bukele have such a high approval rate?

Psychological studies have shown [18]that “insecurity is linked to the rise of autocrats and the erosion of democracy,” as reported by The Guardian [19]:

“When people experience threat – whether actual or imagined – they begin to “tighten”. In physical terms, they tense their muscles, ready to defend themselves. In political terms, they begin to crave security and order in a community that seems to be collapsing. Authoritarian leaders satiate this need by promising quick, simple solutions – and, above all, a return to the tighter social order of yesteryear.”

In El Salvador, which has been one of the world's most violent [20] countries, insecurity is common [21]. Other studies have shown [22] that people who face economic insecurity tend to favor authoritarian leaders; this hypothesis could apply to El Salvador, where one-third [23] of the population is poor.

Experts also point out that Bukele uses social media to his advantage and thereby controls [24] the narrative. Furthermore, he has the benefit of public funds for marketing [25] and promoting himself and his projects—in 2019, he requested [26] 22 million USD for publicity.

According to polls, Bukele had remained popular thanks to strictly managing the COVID-19 pandemic, lowering the homicide rate, and pointing out a weak political opposition.

Although deemed [27] authoritarian in nature by some, Bukele took decisive actions early on that helped delay the virus from entering the country. For instance, even before El Salvador had a single case of COVID-19, Bukele ordered [28] the shutdown of its borders, the international airport, and public transportation. He also ordered several mandatory quarantines [29]. Even though these early actions have affected the country's economy, 95.7 per cent of Salvadorans approved Bukele's decisions to stall COVID-19, according to a poll released by local press [30] in May 2020

Also, the Salvadoran homicide rate under the Bukele administration is the lowest  [31]since the end of the civil war which tore the country apart in the 1980s. In 2020, the country's number of homicides fell by 44.9 per cent [32] compared to 2019. This is also reflected in polls [33].

The year 2020 closes with all insecurity indicators down; the 12 crimes that most affect Salvadorans continue to be considerably reduced. Thanks to the work of @PNCSV and the #PlanControlTerritorial the country is now off the list of violent countries in the world.

Lastly, a weak political opposition is helping President Bukele's popularity. The two other major political parties, FMLN and ARENA, which have governed the country for the last 30 years, are perceived [38] by most Salvadorans as corrupt.

For example, three previous Salvadoran presidents from these two parties have been charged with corruption. Paco Flores [39] died while under house arrest awaiting trial while Tony Saca [40] is in jail serving a 10-year sentence for stealing public funds. Mauricio Funes  [41]is in political asylum in Nicaragua, thereby avoiding Salvadoran extradition; he faces multiple money laundering charges in El Salvador and Guatemala.

Nayib Bukele is the artifact that the people built to retaliate, to punish the right and the left that ruled us for 30 years. The problem [for the opposition] is not Nayib Bukele, the Bukelism, or New Ideas [Nayib Bukele's political party]. The problem is that they continue to have, on the right and on the left, the same representative leaders who failed for 30 years. It is them that the Salvadoran people blame for the bad things we have right now.

According to a poll released by the University Institute of Public Opinion (IUDOP [43]) of the Central American University Jose Simeon Cañas on February 12, Nuevas Ideas [44], the political party created by Bukele, will win over the Legislative Assembly in the next elections. This will give him better control [45] over the parliament. This is good news for those who approve of Bukele and bad news for those who see him as authoritarian.