Algeria releases dozens of pro-democracy prisoners ahead of Hirak anniversary 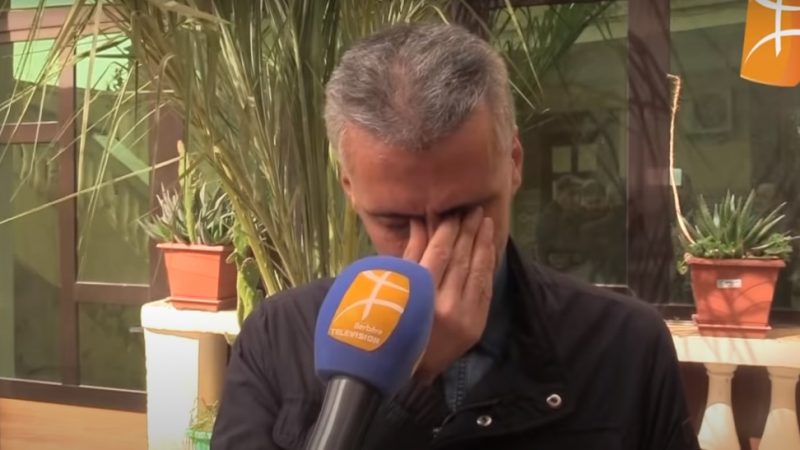 Screenshot of Berbere TV interview with Rachid Nekkaz following his release. He appears here holding back tears as he spoke of his disease.

Algerian authorities released on February 19 at least 33 political detainees linked to the Hirak protests as part of an amnesty that came ahead of the uprising's second anniversary, which was marked by thousands of protesters returning to the streets.

The Associated Press reported on Monday that thousands of demonstrators paid heed to calls for people to take to the streets, in protest to the unmet political, social, and economic reforms demanded in the 2019 uprising that came to be known as Hirak. Rallies took place in the capital Algiers and other parts of the North African country.

The presidential amnesty announced on February 18, accompanied by a parliament dissolution and a pending cabinet reshuffle, was not sufficient to appease the masses.

Among those released is political activist Rachid Nekkaz, who was jailed without trial since December 2019, and whose health had seen a sharp decline in recent weeks as a result of prostate cancer and liver disease.

Talking to local Berber TV following his release, Nekkaz said he had lost 14 kg because of his illness, and has been unable to sleep because of the frequent visits to the bathroom. Holding back tears, he recalled how his father died of the same illness in 2011.

Prominent journalist Khalid Drareni, 40, was also among those pardoned after almost a year of being held in prison over his reporting on the Hirak protests.

A crowd of supporters awaited Drareni at his home to celebrate his release.

Journalist Khaled Drareni arrives at his home. A welcoming group made up of his supporters awaits him.

Speaking to AFP, Drareni's lawyer Abdelghani Badi said that the release was “provisional.” The news agency quoted lawyer and rights activists Mostefa Bouchachi as saying that Drareni still awaits a Supreme Court ruling on this appeal on February 25. He was sentenced in August to three years in prison, which was reduced by a September ruling to a year — a verdict still seen as unjust by his supporters.

Another prominent Hirak activist, Dalila Touat, who had been on hunger strike in prison since January 3, was also among those released on Friday.

The Hirak protests, which broke out in February 2019, uprooted the decades-long rule of strongman President Abdelaziz Bouteflika and continued until its suspension in March 2020 because of the COVID-19. Discontent, however, brewed among the masses over slow tangible political, economic and social change, as the pandemic weighed on the oil-rich country.

The presidential pardon, announced on Thursday, is seen as an attempt to mitigate the crowds amidst growing momentum for protests to resume in the next couple of days. More prisoners are expected to be released, as President Abdelmajdid Tebboune was quoted by AFP as saying that around 55 to 60 Hirak members would benefit from the amnesty.

According to the National Committee for the Liberation of Prisoners (CNLD), over 70 people have been arrested in the past two years over their links to the Hirak protests.

Aside from the pardon, President Tebboune also ordered a cabinet reshuffle and the dissolving of the parliament, other attempts by the state to mitigate the population.

The partial government reshuffle in #Algeria is seemingly postponed until tomorrow. This essentially means:
1/ Negotiations are ongoing
with neutral, less-provocative figures.
2/ The system is struggling to convince technocrats to join a crisis-management cabinet.

According to the BBC, protests had already begun on February 16 with thousands gathering in Kherrata, to the east of the capital, and chants of “Algeria, free, democratic” being heard on the streets, amidst heightened security presence.

Social media platforms have been peppered with posts encouraging protesters to join the protests, with some sharing precautionary measures to reduce COVID-19 spread.