'There are three big Japanese right-wing talking points and Ramseyer has parroted them all.' 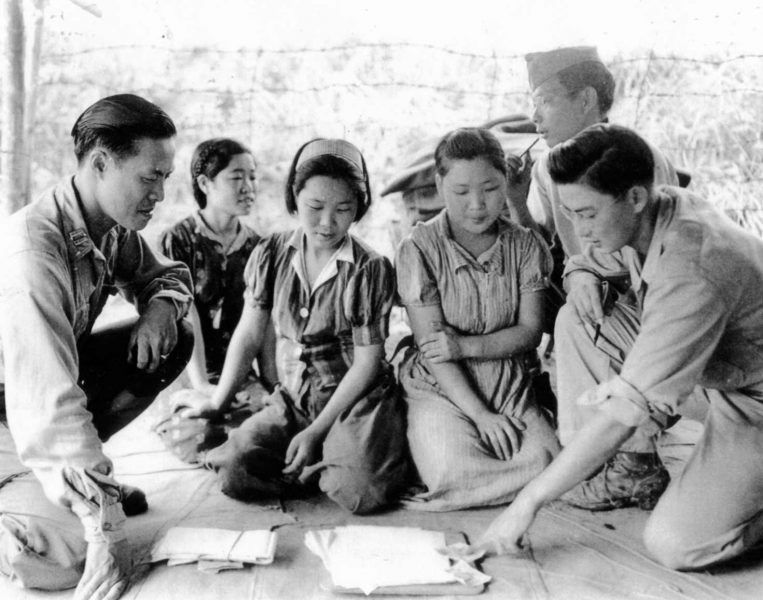 A noted American professor at Harvard Law School has been denounced both at home and internationally after publishing an academic paper arguing that claims about Korean women enslaved by Japanese military forces as “comfort women” during the second world war are historically untrue.

Critics of the professor, J. Mark Ramseyer, who is the Mitsubishi Professor of Japanese Legal Studies at Harvard Law School, argue the paper ignores standard research methods, existing scholarship, and primary sources, and is full of inaccuracies and intentional misrepresentations.

Ramseyer's paper, which is titled “Contracting for sex in the Pacific War,” will be published in the March 2021 print issue of the International Review of Law and Economics (IRLE), but is already available online to academic audiences.

Ramseyer's paper repeats common tropes typically employed by historical revisionists who seek to minimize or erase sexual slavery practiced by Japan during the war. His conclusions contradict rigorous, established scholarship, including a comprehensive 1996 United Nations report on the issue.

Ramseyer summarized the key points of the paper in a column published in late January in Japan Forward, an English-language opinion site for English as a Foreign Language (EFL) learners run by Sankei Shimbun, a hard-right Japanese daily.

…the claims about enslaved Korean comfort women are historically untrue. The Japanese army did not dragoon Korean women to work in its brothels. It did not use Korean women as sex slaves. The claims to the contrary are simply ー factually ー false.

In the Japan Forward opinion piece, Ramseyer also argues that Korean women (in fact, women from more than ten occupied countries in Asia were forcibly conscripted) entered into a mutually agreeable contractual agreement with brothel operators that protected the rights of both parties.

Following the publication of Ramseyer's Japan Forward column in late January, attention turned to the online version of his IRLE journal article, which was released in December 2020. Besides generating headlines in Korean media, the article sparked condemnation by students and faculty at Harvard University, where Ramseyer works.

The Korean Association of Harvard Law School, a student group, issued a statement in response to Ramseyer's article, stating:

Without any convincing evidence, Professor Ramseyer argues that no government “forced women into prostitution,” a contention he also makes in his editorial. Decades’ worth of Korean scholarship, primary sources, and third-party reports challenge this characterization. None are mentioned, cited, or considered in his arguments.

Ramseyer was also publicly criticized by colleagues. In a Twitter thread, Jeannie Suk Gersen, a legal scholar and the first Asian woman and first Korean professor to teach at Harvard Law School, said:

In other public comments, Gersen called into question Ramseyer's interpretation of contract law, stating, “No legal system would recognize or justly enforce contract of this nature,” where people forced into sex in the context of Japanese military occupation in wartime were not free agents exercising agency.

In the IRLE paper, for instance, Ramseyer argues a ten-year-old girl entered into a contract with full knowledge of what sex work entailed:

When Osaki turned ten, a recruiter stopped by and offered her 300 yen upfront if she would agree to go abroad. The recruiter did not try to trick her; even at age 10, she knew what the job entailed.

The critique of Ramseyer's interpretation of contract law is notable, since Ramseyer, as Mitsubishi Professor of Japanese Legal Studies at Harvard Law School, is widely regarded as an expert on Japanese law and economics. In spite of his long connection to Japan, however, Ramseyer's curriculum vitae indicates no apparent expertise on the topic of wartime sexual slavery or East Asia.

The child of Christian missionaries, Ramseyer attended elementary school in rural Japan before returning to the United States to attend college. While he would eventually attend and teach at top-ranked Japanese universities after completing a master's thesis on the merchants of early-modern Japan, his scholastic focus has always been law, and never Japanese or Korean wartime history.

Indeed, in a February interview, Ramseyer also admitted that he neither speaks nor reads Korean, indicating he cannot, for example, evaluate or even understand testimony by Korean victims of sexual slavery:

Asked why he did not cite any Korean sources in the paper, Ramseyer said he is “very upfront” about the fact that he does not read Korean.

Historians familiar with wartime sexual slavery perpetrated by Japanese armed forces also point out that Ramseyer has long championed historical inaccuracies and revisionism. Nick Kapur, a historian of modern Japan and East Asia notes multiple instances in the past where Ramseyer has promoted racist or questionable narratives:

Ramseyer finally went too far, but he has been a right-wing academic troll for decades.

Here is an article in which he claims Japan's discriminated burakumin minority is A) fake and B) deserves discrimination because they are basically all criminalshttps://t.co/WYz5xWH1a3 pic.twitter.com/tF1zw0l42N

A transnational team of five professional historians of Japan and its empire published an open letter that focuses on the academic integrity of Ramseyer's recent IRLE article. 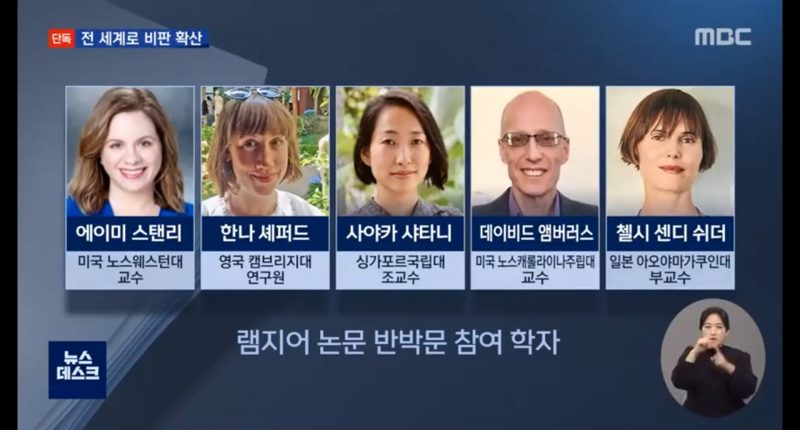 Their letter, at 33 pages, is four times as long as Ramseyer's eight-page IRLE article, and carefully examines every aspect of Ramseyer's article, with particular focus on his sources.

Asserting that Ramseyer mischaracterized, distorted and misrepresented sources, the historians questioned the fundamental academic integrity of the journal article, and called on IRLE to retract it:

Its inaccuracies are more than superficial errors; they completely undermine the article's claims. […] We believe that an article containing this level of academic misconduct should not have passed peer review, or have been published in an academic journal.

Miki Dezaki, a documentary filmmaker who explored the competing historical narratives about the “comfort women” issue in his film “Shusenjo,” notes that Ramseyer did receive a letter of support signed so far by six individuals, all of who are affiliated with a far-right nationalist group in Japan:

This open letter in support of Ramseyer's paper on the comfort women is signed by a whopping 6 people, who call themselves historians, but only one, Jason Morgan, has a degree in history. pic.twitter.com/44Xt7MUAQv

In an interview with Global Voices, Dezaki also notes that in another academic paper discrediting the claims of “comfort women,” Ramseyer cites an individual named “Texas Daddy,” an American retiree with his own YouTube channel who is considered a mouthpiece for Japanese nationalists.

There are three big Japanese right-wing talking points and Ramseyer has parroted them all. He claims the women were just well paid prostitutes, he claims that Asahi Shimbun’s retraction of a false testimony proves that the comfort women issue is a lie, and he claims, most despicably, that the victims’ testimonies are inconsistent, which suggests that they are lying.

Regarding what motivates Ramseyer and others, Dezaki suggests that:

It really boils down to fame, money and staying relevant. That isn’t to say that these people don’t believe in what they are writing or saying, but doing so in the public arena gets them praise, speaking engagements and book deals in Japan.

An editor for the academic publisher behind IRLE has been quoted as saying that the article is “considered final,” though IRLE has appended an expression of concern to the online version of the piece to inform readers that concerns have been raised regarding the article's historical evidence.

The March 2021 print issue in which the paper is to appear is also being temporarily held so that comments on the paper can be published in the same issue.