Tech giant on collision course over media code of conduct 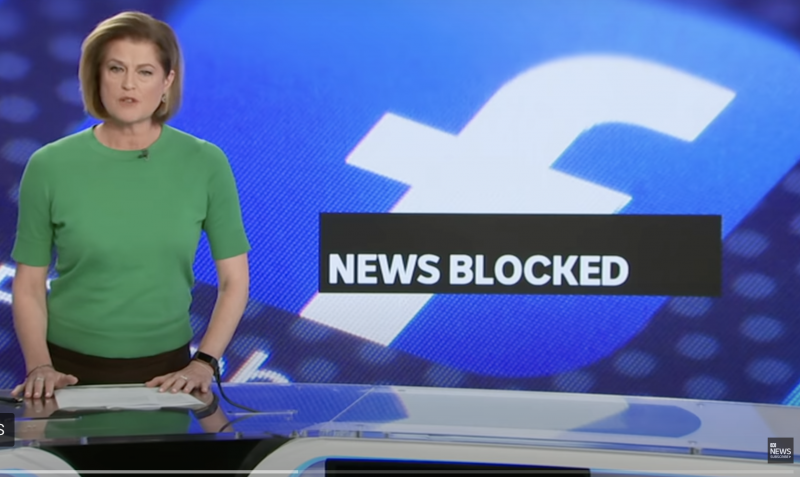 News blocked by Facebook: Screenshot from ABC TV News video of an interview with Jeff Jarvis of the City University of New York.

Facebook users have been outraged by the social networking giant's blocking of news stories in Australia. The ongoing dispute between Facebook and the Australian government came to a head on February 18, 2021, when the platform blocked news over a draft code of conduct concerning payment for news content.

The legislation drafted by the Australian government “would force tech giants Facebook and Google to negotiate with media companies over payment for linking to their news stories.” BBC News has a useful summary of the dispute so far.

#DeleteFacebook and #BoycottZuckerberg were just two of the trending hashtags on Twitter. “Paul” might have only 25 followers but he summed up a common reaction:

As might be expected, the mainstream media were very displeased. The Age newspaper’s front page was typical:

Facebook raised the stakes when it “inadvertently” blocked non-news sites such as The Bureau of Meteorology, emergency services, health pages and a host of other community services. The response was stinging:

The Bureau of Meteorology reported that its “Facebook page has been impacted by the broader Facebook changes.” This on a day when there is a “catastrophic danger” of bushfires in Western Australia & warnings of possible flooding in the state of Queensland. Thanks #facebooknewsban https://t.co/02SJbIaqW7

So Facebook has decided that bushfire warning notifications for people who are potentially in direct harm shouldn’t be alerted to them because the platoform won’t make a cent for them is the right way forward then? #DeleteFacebook #BoycottFacebook #BoycottZuckerberg

Many brought into the discussion the impact on the already marginalised, such as indigenous communities:

Shutting down women’s anti violence, carers, migrant and other orgs as well as small independent op-ed sites and really sticking it into a large number of indigenous organisations.#FacebookAustralia #facebooknewsban #facebook pic.twitter.com/SuvbsjsSy2

Facebook blamed the Australian government’s definition of news content for the bungle and started reversing these “inadvertent” blocks. Some Aussies agreed:

Um @breakfastnews when discussing community groups blocked too, it is “dishonest” to not include in your chat “why” this happened, as was in response to vague wording in legislation as to what “news” is.

That is on Government! pic.twitter.com/NQ915massL

Despite the strident attacks on Facebook by his government, the Australian federal treasurer, Josh Frydenberg, maintained that negotiations were continuing on the implementation of its draft code. Perhaps he could follow the lead of the United Kingdom, where Facebook News began rolling out last month.

One source of “news” that has not been blocked is the satirical website The Chaser, which has several stories about the policy brawl including this one:

Facebook finally crack down on racism by banning all Aussie media https://t.co/hvW3EuetgC

Some online believe that the government is more than happy to have a major dispute to take attention away from the scandal revolving around an alleged rape in parliament house:

Brittany Higgins’ rape should be the continued focus. Facebook is the distraction set up by the govt. #IBelieveBrittany https://t.co/xSWbEF4z6F

Another concern has been that the absence of reputable news stories may lead to the dominance misinformation and disinformation on the platform:

‘Attack on democracy': Experts fear misinformation will thrive on Facebook under news banhttps://t.co/NuW5hfuvKB via @skinnergj

Some see large media organisations as the source of much of the misinformation:

Facebook is much improved with no links to Newscorp misinformation

At Techdirt, Mike Masnick has a detailed defence of Facebook's position on the code:

This fight was not “Facebook v. Australia.” Or “Facebook v. journalism” even though some ignorant or dishonest people are making it out to be the case. This was always “Rupert Murdoch v. the open web.” We may not like Facebook in the role of the defender of the open web (and it's far from the best representative for the open web).

Jeff Jarvis from the City University of New York made similar arguments on Buzzmachine. It includes this interview with ABC TV News Australia:

Meanwhile, Google has made considerable progress in its response to the proposed legislation. The threatened removal of its search engine in Australia is increasingly unlikely. A number of deals have been made, including one with Rupert Murdoch’s News Corp, to pay for content in its Google News Showcase.

In a fitting twist they, apparently briefly, blocked their own page.

Perhaps Facebook should take a warning from the fact that the issue was no longer trending on Twitter the next day.