An investment in the country's 'raw talent, culture and heritage' 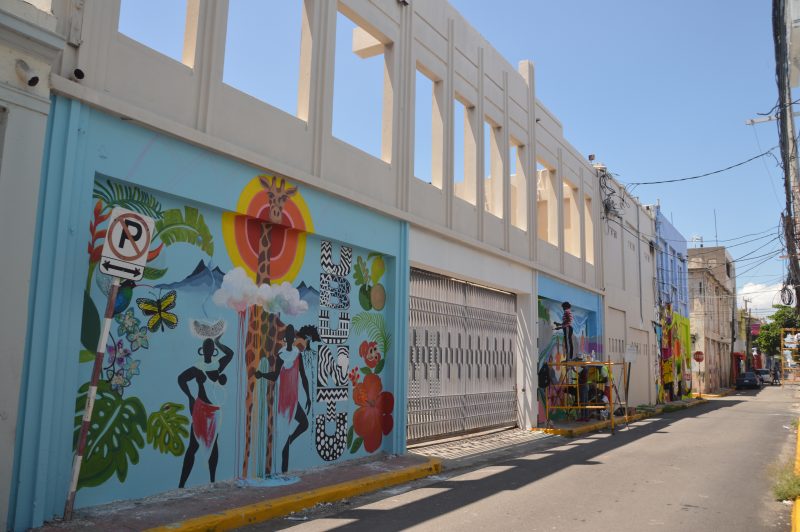 On March 10, 2020, Jamaica confirmed its first case of COVID-19. Since that day, Jamaica’s economy, in common with the rest of the world, has been reeling. The creative sector, which had begun to show many “green shoots” prior to the COVID-19 outbreak, has been particularly hard hit, but it is forging ahead thanks to novel ideas, financial support and the brave spirit of entrepreneurship.

Andrea Dempster-Chung, executive director of the non-profit Kingston Creative, who has been speaking up for the sector, told Global Voices:

It is hard to reflect on 2020 without acknowledging the severity of the blow that creative people in Jamaica have been dealt. Only the creative or entrepreneur that makes their living from events, performances, creative products or cultural tours and heritage can really understand the impact of this year financially, and even psychologically. Creatives, already societally undervalued and often working gig to gig were brought to an absolute halt.

Nevertheless, Jamaica’s ever-resilient creatives are fighting back. After the initial “shock” of the country's first lockdown, Dempster-Chung says, Kingston Creative decided to proceed with its Artisan Collective Store and its Creative Hub. Both opened in June 2020, these two new creative spaces in downtown Kingston offer everything from retail and co-working locations to digital/podcasting studios and other creative-based resources:

We […] capitalised on the quieter streets to erect scaffolding and complete larger scale murals and street art, expanding the placemaking project […] that is defining the Downtown Kingston Art District.

In the latest phase of its “Paint the City” project, Kingston Creative contracted 10 Jamaican artists for a series of murals in the Water Lane area of the city.

The Tourism Enhancement Fund and Sherwin-Williams paint company helped sponsor the artwork for the initiative, which is supported by the Kingston and St. Andrew Municipal Corporations and the Ministry of Culture, Gender, Entertainment and Sport, a First 50 Founder of UNESCO's Creative City of Music.

The non-profit’s efforts to keep Jamaica’s artists, dancers, musicians and writers afloat and producing new work received a major boost through a partnership with the Inter-American Development Bank (IDB). Dempster-Chung says this has gone a long way to helping 2021 look much brighter:

This partnership with IDB Lab will deliver immersive technologies, new digital platforms and enhance global market access for [Jamaican] creatives. The programme will be delivered through the Creative Hub […] introducing new commercial and capacity-building projects to grow the ecosystem, develop creative entrepreneurs and ready them to take advantage of new opportunities.

For a country like Jamaica, she believes, “with so much raw talent, culture and heritage,” this investment signals a great sense of hope. The murals have brought greater energy and vibrancy to downtown Kingston during the challenging times of the pandemic, and point the way to a brighter future. Check them out, along with the artists’ statements, below.

Beauty in the midst of a pandemic 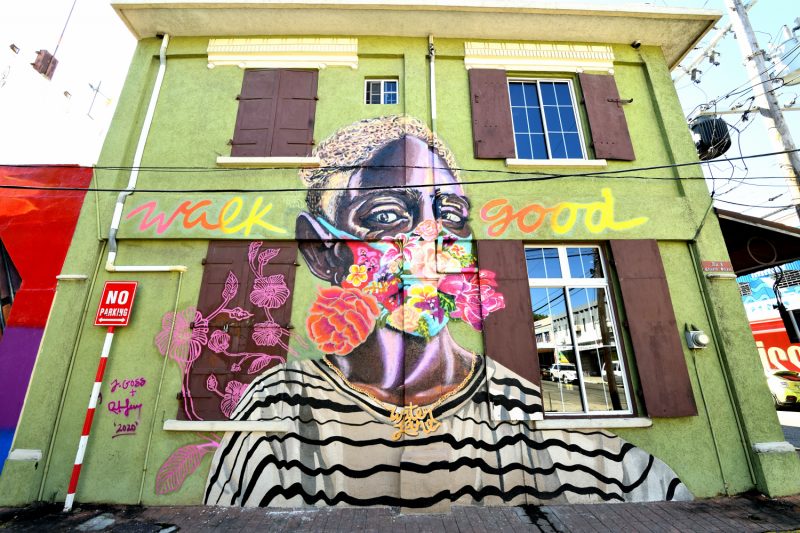 “The artwork represents a masked person—the mask has been covered as a bouquet—the straps are still missing, but they can be soft and ribbon-like. I was thinking this would both bring light to the current COVID safety issues, but also introduce more beauty and floral elements that break up and refresh [the] concrete space surrounding.” – Rebecca Levy

A spirit of resilience 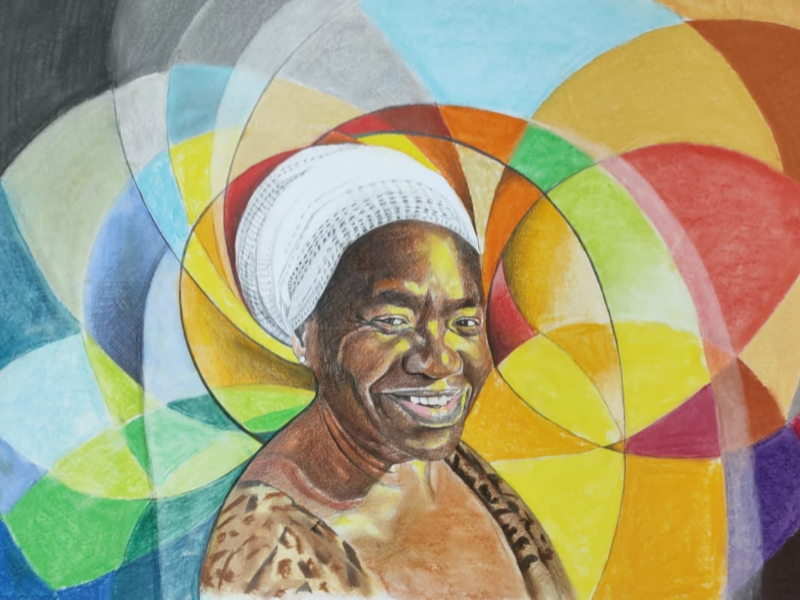 “A realist artist, my works emulate and dominate cultural heritage and how our ancestors overcome hardships to make independent Jamaica. This mural, through a series of bold colours, will give energy, inspiration and strength to the community of Water Lane and its environs as an expression of freedom. This woman sacrificed all her life and can now embrace happiness. The story of resilience, determination and freedom.” – Richard Smith

A tribute to ‘Toots’ 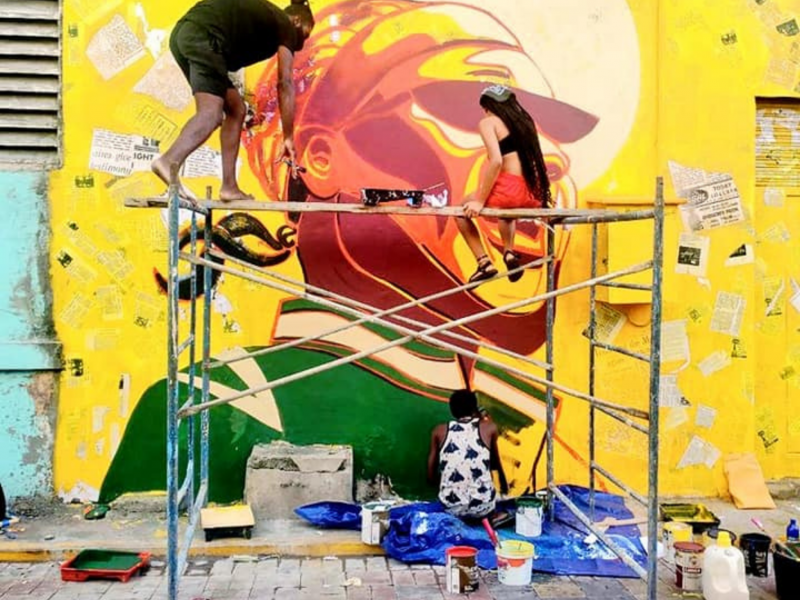 “Frederick Nathaniel ‘Toots’ Hibbert was not only a pioneer of reggae but a cultural icon. He was known to be a warm person and one that took care of his people. He had a lifelong career of cultural influence that transcends [his] music. In my practice, I like to use current articles and imagery from newspapers to reflect time and its relation to the subject matter; using these articles could be a great way to highlight Toots’ legacy. Though he is no longer with us, his music and legacy will live on forever.” – Joshua Solas

A voice for children 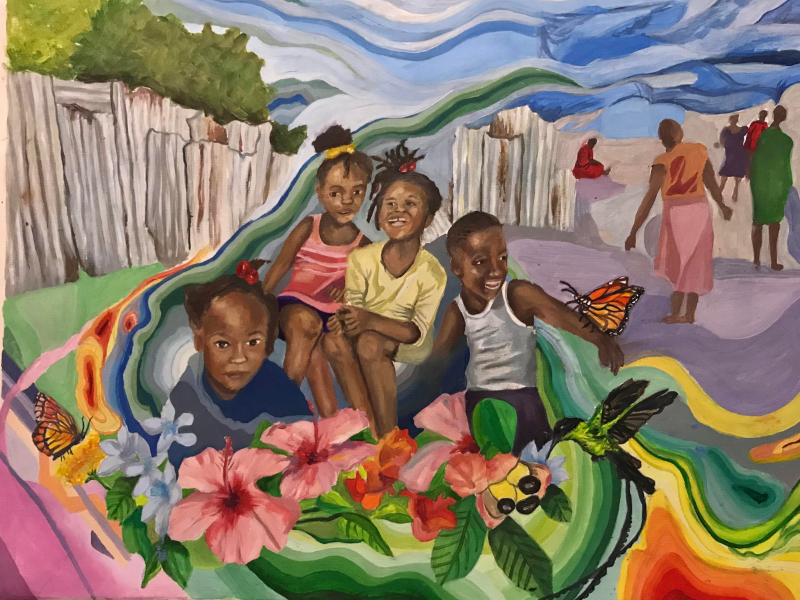 “My design stems from my personal experience and observation as an educator. The drawing depicts children in inner-city communities who face challenging circumstances and are […] struggling with social issues such as poverty, crime, single parenting, and shrunken ability to make positive choices. It is my intent that the mural serves as a voice in request of protection and maintaining of the children’s rights and wellbeing.” – Zohria Allen

With this level of beauty and creativity imbuing Jamaica's capital, the pandemic may prove just a little easier to bear.