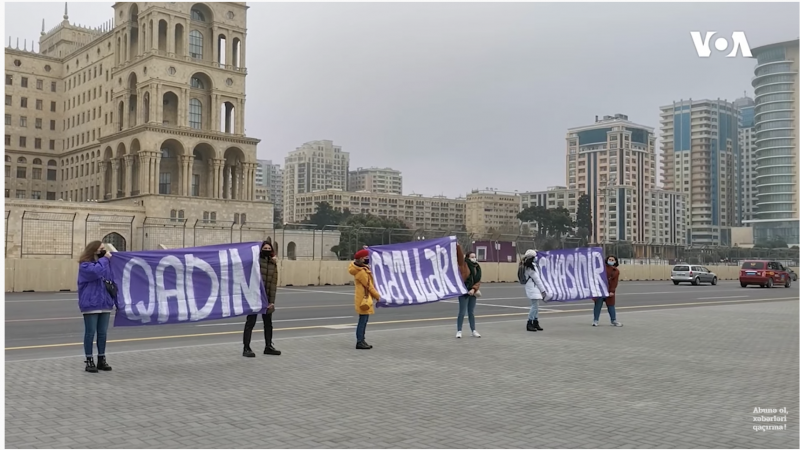 A group of women holding signs “Femicide is political.” Photo from Gulnara Mehdiyeva's Facebook page, via OC Media and used with permission.

Feminists in Azerbaijan held a rally in front of the Government House on February 4 in response to the brutal killing of a woman in Baku.
“Despite the dire situation facing Azerbaijan’s women, the State Committee for Family, Women and Children Affairs does not take any serious action or report on the current situation,” one of the protestors told Voice of America.
The protesters held posters that read “femicide is political,” which the police took away after observing the scene for a few minutes. Police also escorted women out of the site.
Protestors said the demonstration was given impetus by the brutal murder of Banu Maharramova, a 32-year-old woman whose dismembered body was found in the trash bin in Baku’s Nasimi district on January 27. Local police allege that she was killed by her 75-year-old father-in-law Idris Maharramov.

Police report that after killing the woman, Maharramov dismembered her body, stuffed the parts into cellophane bags, and threw them in trash bins in the nearby district. According to neighbors, Banu Maharramova lived with her two young children as well as her in-laws, while her husband lives abroad.

After the incident, Idris Maharramov was detained by police. He remains in custody, suspected of committing premeditated murder. The investigation is ongoing.

News of the killing sparked a wave of anger on social media under the hashtag #banuüçünsusma (don’t be silent for Banu).

Aghazadeh said that they initially planned the rally as a response to two recent suicides by young women in January. Their deaths, she said, were a “symptom of the endemic violence and lack of social support that women face in Azerbaijan.”

“Women feel trapped,” Aghazadeh says, “there are too few domestic violence shelters and they hesitate to appeal to the police as officers often make attempts at family reconciliation, while actually just returning victims into the clutches of their abuser.”

“The aim of our protest in front of the Government House was to attract the attention of the Ombudsman as well as the State Committee for Family, Women and Children's Affairs whose offices are in this building, and are directly responsible for combatting this issue in the country,” Aghazadeh said.