The fake telecom experts on Twitter had AI-generated faces 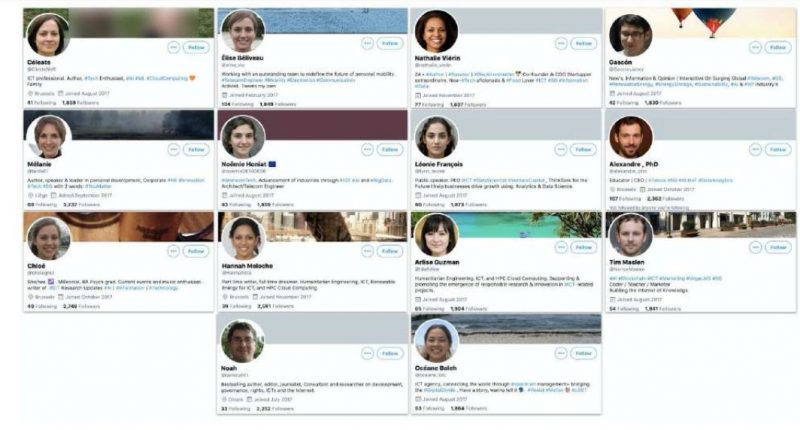 The following report was initially published in Chinese on the Stand News on January 31, 2021. It's reproduced on Global Voices under a content partnership agreement.

Belgium's National Security Council decided in June 2020 to impose restrictions on high-risk vendors in the country’s 5G infrastructure, which could block Huawei from investing in it.

Although there is no evidence that Huawei was behind the influence campaign, posts by these fake accounts were shared by the company's representatives and official accounts. Graphika reported that Kevin Liu, Huawei’s president for public affairs and communications in Western Europe, who has a verified Twitter account with 1.1 million followers, shared 60 posts from the fake accounts in December; Huawei’s official account in Europe, with more than 5 million followers, shared 47 posts from the fake-account cluster.

Each of these fake accounts had very similar behavior. They were created in the second half of 2017, but only started tweeting in late 2020. Despite the late date at which they started tweeting, their first posts were all retweets of tech-related content that originated on November 10, 2017, or November 10, 2018. (…) On each account, most of the retweeted posts used the same keyword or hashtag, such as “VR” (virtual reality), “AR” (augmented reality) or “5G”. The tweets were not always relevant to the tech world, suggesting that they may have been automated and not manually checked.

The research has attracted attention from Western media, including Financial Times and The New York Times. Upon receiving the report, Twitter has suspended the cluster of fake accounts.

Ben Nimmo, a member of the research team, tweeted about one of the fake accounts (now suspended):

Alexandre's had a bit of an obsession with Belgium and #5G recently.

Especially, Belgium's security limitations on 5G providers, which are reportedly mainly about Huawei and ZTE.

The posts shared by the cluster came from a range of sources, including U.S.-based Politico, German business paper Handelsblatt, and websites such as eureporter.co and dwire.eu.

In a few cases, the same posts were published on multiple sites. For example, an article headlined, “5G: If the Belgian government exclude specific suppliers, who will pay for it?” was published on london-globe.com, newyorkglobe.co, toplinenews.eu, and eureporter.co with different bylines. Two of the posts shared by the cluster were flagged as “sponsored contents” on Politico and itdaily.be.

Michiel van Hulten, director of Transparency International in Europe, spotted the pro-Huawei campaign in December 2020 by digging into a promoted Tweet written by Mike Bai, Huawei’s president of strategy marketing in Western Europe who joined Twitter in March 2020 and currently has more than 885,000 followers.

So here's the thread on Huawei I promised yesterday. It seems Huawei is using social media black ops tactics to try to convince policy-makers in Belgium that it can be trusted to build 5G networks. ? pic.twitter.com/noZKM13RuD

Van Hulten's initial investigation is in alignment with Graphika's research findings as the pro-Huawei posts shared by Bai were also connected to the fake account cluster.

Financial Times later found out that at least six employees from Huawei had obtained more than 10,000 followers within several weeks after opening their Twitter accounts at the beginning of 2020.

While Graphika's research points out that their findings are insufficient to suggest that Huawei was behind the operation, the company's employees were key amplifiers of the comments produced by the fake cluster:

The Huawei officials were by far the most significant amplifiers of the fake accounts’ output: they had the highest followings, and they typically mentioned the fake accounts dozens of times each.

In response to the research, Huawei said it had started an internal investigation to see “if there has been any inappropriate behavior.”