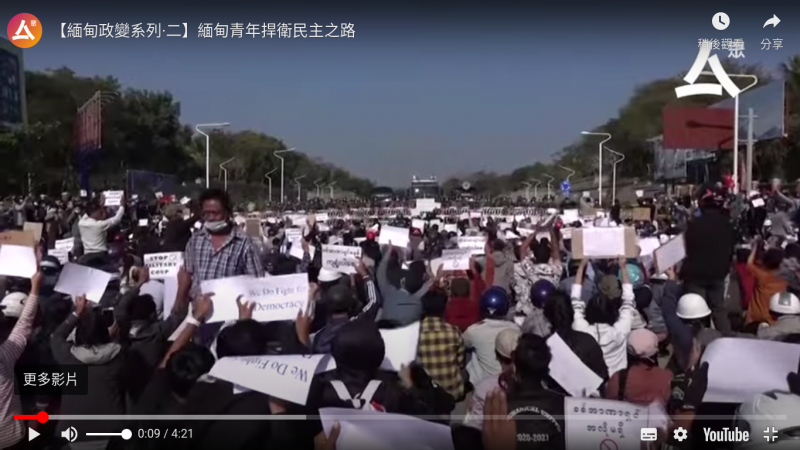 The term “seafood” went viral on social media this week in connection with the Myanmar military takeover after the Chinese Embassy in Yangon denied daily flights from China were providing assistance to the coup government.

Reports of cargo flights between Kunming and Yangon have raised suspicions among Myanmar pro-democracy activists that China was sending experts and equipment to assist Myanmar's military, which took over the country's civilian government on February 1. A response statement by the Chinese Embassy claimed the planes were simply carrying seafood, which sounded implausible to many.

Unverified claims about China’s backing of the Myanmar coup started circulating in early February, as all Chinese state-affiliated media outlets were using the phrase “a major cabinet reshuffle” to describe the military takeover. Although the Chinese government has so far taken no official stand, the fact that China blocked the UN Security Council's condemnation of the junta has led many to believe that Beijing is backing the coup for geopolitical reasons.

Kyaw Win of the Burma Human Rights Network highlighted the meaning of the viral usage of “seafood:”

Despite YGN Int’l airport is closed dubious flight from Kunming, China to Yangon have several flights daily. Chinese Ambassador said these flights carrying seafood from China for the embassy. So we change the name of Chinese embassy to a “seafood market”. #Burma @benedictrogers pic.twitter.com/Yovz7nEMwx

Chinese foreign ministry spokesperson Wang Wenbin said he had not heard of any arrangement involving the sending of experts and equipment to Yangon.

Myanmar's citizens began protesting in front of the Chinese Embassy days after the coup took place. Netizens have also been using hashtags such as #ShameOnYouChina and #ChinaHelpMilitaryCoupForOwnBenefit on social media.

Twitter user @Ellen5461 posted a few photos of a protest where some of the placards bear slogans written in Chinese, saying “Stand by Myanmar, do not support dictatorship”:

Myanmar citizen protesting against the military coup in front of China Embassy.

@Alicebrosel posted a photo of another protester dressed in Chinese costume holding a placard saying “Myanmar military dictatorship is made in China”:

Myanmar citizens are also concerned about the introduction of a Cybersecurity Bill by the military government that empowers authorities to block websites, remove content, and charge individuals for spreading misinformation. As China is the world's top expert in controlling and censoring web traffic, many see the country as playing a key role in the bill's implementation.

⚠️CHINA SUPPORT MILITARY COUP ⚠️
The military is about to enact new cyber law to control the people's online usage. Basically, they don't have technologies and tools to initiate that, and so that is where China will take part#ShameonyouChina #Feb16Coup#WhatsHappeningInMyanmar pic.twitter.com/f81wAwXySV

Myanmar citizens’ access to the internet has been periodically disrupted since the coup took place. However, starting on February 14, near-total internet shutdowns have been reported by digital rights organization NetBlocks between 1 a.m. and 9 a.m.:

There is also speculation that the recurring power outages experienced in the country in the past few days are related to the testing and setup of Myanmar's version of The Great Firewall. Language decoding issues faced by some Myanmar netizens have also reinforced this idea, as noted by user @blahbla69235153:

Here Sir, many people are already facing this problem. When we send message to MPT 7979 (Mobile Operators) in Eglish , they reply in Eng but when we send in Burmese they reply in Chinese. pic.twitter.com/KHFpLT1iww

Amidst criticisms from Myanmar and worldwide, Beijing’s ambassador to Myanmar Chen Hai denied that China had been “informed in advance of the political change” and said that the current situation was “absolutely not what China wants to see.”