'Stop using my religion as an aesthetic' 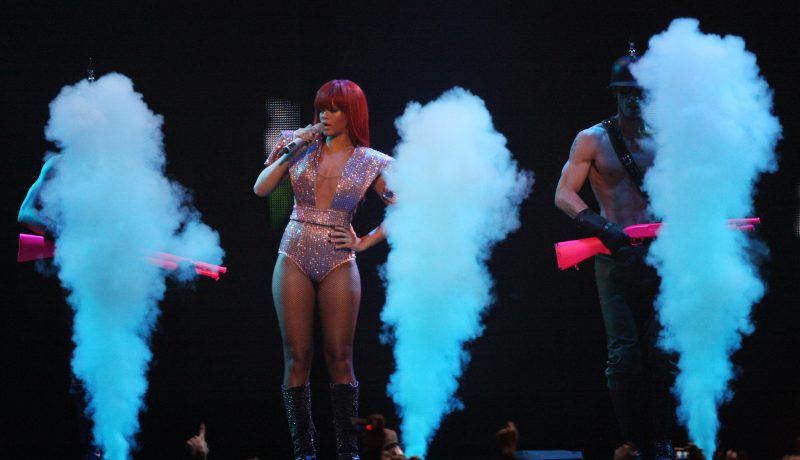 Rihanna onstage during her Last Girl On Earth Tour in 2011. Photo by Eva Rinaldi, CC BY-SA 2.0.

Mere weeks after Barbadian-born pop star Rihanna faced social media backlash, from the Indian government as well as from supporters of Prime Minister Narendra Modi, for drawing attention to the plight of protesting Indian farmers, come accusations of cultural appropriation and religious disrespect. The controversy centres around an image the 32-year-old singer posted of herself wearing nothing but lilac silk boxers from her Savage X Fenty lingerie collection and several pieces of jewellery, one of which was a pendant of the Hindu deity, Lord Ganesh.

when @PopcaanMusic said “me nuh wan ya wear no lingerie tonight fa me girl” @SavageXFenty pic.twitter.com/bnrtCZT7FB

The outcry from Hindu social media users, as well as others who found the move distasteful, was swift:

She wear a pendent. Right!
But why she is topless, and look like it is just a aesthetic of fasion for her
Its not right, we indians have a culture and never do such things!! Shameful!!!!#rihanna #ganesh #rihannatopless

rihanna !! stop using my religion as an aesthetic !! that ganesh figurine at the end of the chain :( is a holy and sacred figure for us hindus

The fact that the boxers shown in the post are currently sold out on her lingerie website did not help matters:

Many who took offense because of the juxtaposition of sexuality and religion wanted Rihanna to apologise:

You disappointed all the #Hindus across the glob
@rihanna
stop using our religion as an aesthetic.lord #ganesh is the first to worship .u can’t do such disrespect to our religion. That’s not our culture. You should apologise immediately. #Rihanna

A few Twitter users even suggested that the pop star's Twitter account should be terminated—or at least suspended. Others, however, didn't see what all the fuss was about:

I too believe in Ganesha but don't believe it in any pendant or photo, God lives in heart.why people making it issue, Is God so weak that its affected when topless lady wears a pendant or becomes powerful when wore by a saree clad woman?

To all the people who are trolling @rihanna for wearing a Hindu God pendant #Ganesha, what is so offensive about it. Don't Hindus wear Hanuman ji or Ganesha's pendant? Or is everyone saying she cannot follow Hindu religion?? #Rihanna #Pendant #Hinduism #LORDGANESHA

One Twitter user, however, noted that context was important:

We are so tired & if we raise voice against this cultural appropriation so we are labelled as hindu extremist. For you all hinduphobics it is just necklace but for us he's god. Please stop telling us wht is offensive & whts not. Audacity of these ppl “hinduphobia doesn't exist”?

Another argued that the crucifix has been used ornamentally by celebrities before, most notably by Madonna, who often employed Christian religious symbolism in her performance art and music videos.

Some social media users were quick to associate the backlash Rihanna received over her tweet about the farmers, and her choice of pendant, suggesting it was done deliberately:

She did it mainly to hurt hindu sentiment though cuz many ppl trolled her for farmers tweet…mainly hindus they were.. She was not knowing anything about new farms law.. And she doesn't know anything about sanatana dharma it was just to hurt..

One politician, who is a member of the ruling Bharatiya Janata Party (BJP), felt the photo validated his opinion that Rihanna had no business tweeting about the farmers in the first place because she lacked an understanding of the country's cultural and religious sensibilities.

This is not the first time Rihanna has been accused of cultural appropriation in recent years. Her 2019 cover photo for Harper's Bazaar magazine in China, in which she was dressed in traditional Chinese clothing and accessories, did not hit the right note for many.

This is also not the first time she has displayed the Ganesh pendant. She was first pictured wearing it in 2019, though there was little, if any, backlash at the time.

So far, the post of Rihanna wearing the pendant has received about 34K retweets and close to 289K likes.