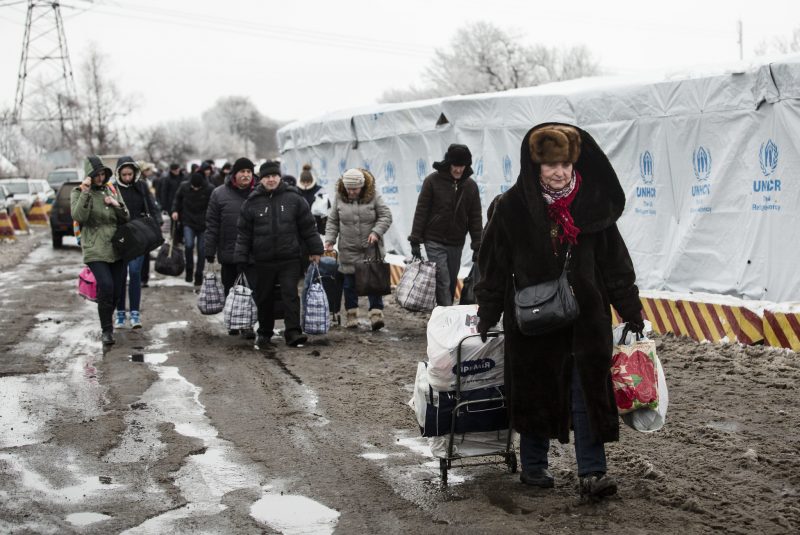 People rush to the bus stop at the border crossing point in Mayorsk, Donetsk area on December 27, 2016. Photo by Anastasia Vlasova for UNDP Ukraine on Flickr (CC BY-ND 2.0).

On Valentine’s Day 2021, three Ukrainian soldiers died from an exploding landmine in the Donbas, the region of eastern Ukraine split by fighting between the Ukrainian government and Russian-backed rebel forces. The youngest was born in 1994, three years after Ukraine became an independent state following the collapse of the Soviet Union. The year he was born, Ukraine agreed to get rid of all the nuclear weapons on its soil. When he was three, Russia and Ukraine signed a Friendship Treaty, affirming respect for each other’s territorial integrity. Indeed, he grew up in a state whose territory was not plagued by armed disputes over unresolved legacies from Soviet and pre-Soviet times. Moldova and Georgia were not so lucky. Ukraine was a relative success story.

This changed in early 2014 when protesters forced the resignation and flight of President Viktor Yanukovych, a former Donbas political boss and pro-Russian politician. The Kremlin saw the so-called Euromaidan protests—what participants in Ukraine called a “Revolution of Dignity”—as a cynical western plot against its influence in Ukraine. Russia's leadership responded by fomenting revolts in Crimea and eastern Ukraine, and then intervening militarily to annex Crimea to Russia and support two breakaway territories in the Donbas, the self-proclaimed People's Republics of Donetsk and Luhansk (DNR/LNR).

Negotiators from Ukraine, Russia, Germany and France eventually hammered out a series of protocols in Minsk designed to end the fighting, delimit a frontline between combatants, and transition the breakaway regions back to eventual Ukrainian government control. That was six years ago. The fighting has stabilized along a line of control but none of the Minsk II protocols have been implemented. However, stabilization is a relative term. Soldiers continue to die from sporadic incidents along what is now one of the most heavily mined military front lines in the world.

To gauge opinions on both sides of the line of control, we conducted simultaneous computer-assisted telephone interviews (CATI) in September and October 2020. These surveys with similar texts were fielded by two highly reputable companies: the LMR (Levada Marketing Research) for the self-proclaimed DNR/LNR and the Kyiv Institute of Sociology (KIIS) in the government-controlled Donbas. While conditions in the DNR/LNR prohibit safe and reliable face-to-face survey research at this time, we contend that it remains important to try to capture the views of those directly affected by the war.

Every aspect of daily life in and near a war zone is affected by the war. According to a 2020 Crisis Group report, war has “plunged an economically troubled region into ruin (…) On both sides of the front line, residents have settled into a new normal that drifts between dreary and dire.” Still, the daily routines endure despite the shadow of war. It is in everyday life—people’s ability to put food on the table, to hold a steady job, to see their children grow up safely, to obtain pensions—that trust in a state and its institutions is built or lost. These comparative trust levels on both sides of the line of contact might well decide the future of this divided region.

In this article, our results compare the trust in the national government in the Kyiv-controlled Donbas, on the one hand, and trust in the local authorities in the self-proclaimed DNR/LNR, on the other. In the government-controlled parts of Donetsk and Luhansk regions, some local authorities have not been able to carry out their civic responsibilities, while others have been replaced with a temporary civil-military administration. Local elections in Donbas have been severely curtailed since the start of the conflict, with the latest round in October 2020 cancelled in many areas along the frontline, disenfranchising over 450,000 citizens. The survey results confirm how distant the Kyiv government appears to the residents in this part of the Donbas. As seen in the first graphic (Figure 1), fewer than 10 per cent of the respondents trust the national government to take care of their needs as citizens, while about 45 per cent recorded their distrust.

In the DNR/LNR, trust appears to be higher with 26 per cent of the respondents expressing trust in the local authorities (18 per cent distrust). But with nearly half neither trusting nor distrusting the local authorities, political support for the self-proclaimed DNR/LNR authorities appears lukewarm. Indeed, the results suggest that the local population, just like residents in the Kyiv-controlled Donbas, know that they have to manage their lives as best they can without holding out much hope for help from the authorities.

Trust in the very institutions that should be responsive to citizen needs is low in the Donbas as a whole. But the relative gap in trust between the two parts of the Donbas is indicative of how residents in government-controlled regions believe Kyiv has left them behind. The Ukrainian state has significant work to do in those areas of the Donbas it governs.

One of the characteristics of the Donbas conflict, in contrast to the conflicts in Moldova and Georgia, is that it erupted more than two decades after the collapse of the Soviet Union. While there was some tension over the fate of the Donbas after Ukrainian independence, it was not a burning issue for most residents. In fact, self-determination for the region was a cause that motivated only a minority. The ouster of the pro-Russian Yanukovych government in Kyiv in early 2014 nurtured and fed that sentiment. It is worth probing just how strongly people feel loyalty to the state and flag (DNR/LNR or Ukrainian) under which they currently live.

In our survey, we asked a question designed to measure what academics term a pure “public goods” vision of the state. It asks respondents to agree or disagree with the following statement: “It does not matter what country I live in; all I want is a good job and a good pension.”

This graph (Figure 3) might surprise readers, showing that majorities on both sides of the line of contact agree with the statement. Economic and material security thus trumps separatism and nationalism. Importantly, the numbers who disagree (just over one-third of the population) are also nearly identical on both sides of the Donbas dividing line. While this is a minority sentiment among ordinary people, those affirming the greater importance of “country” express the dominant and often the only acceptable view of those in positions of power. Whose flag flies where is the overriding concern.

Examination of the answers to these three questions by age and nationality reveals an important asymmetry. In the government-controlled area, older people and self-identified Russians are less trusting of the authorities and agree more strongly with the statement about material needs being more important than the flag under which they live. In the self-proclaimed DNR/LNR, it is younger people and self-identified Ukrainians who express these sentiments more strongly.

The degree of trust in local authorities on both sides of the territorial divide in the Donbas is a crucial factor shaping the future of the region. In certain fundamental ways, the aspirations of the majority of people on both sides are the same. However, this conflict was never about the Donbas alone: it is also about broader geopolitical struggles. As long as these endure, the conflict in the Donbas is likely to persist and lines on the ground and in residents’ minds are likely to become more entrenched.