President Jovenel Moïse always seems to land on his feet, but what about Haiti?

The opposition says his five-year term ended on February 7, 2021 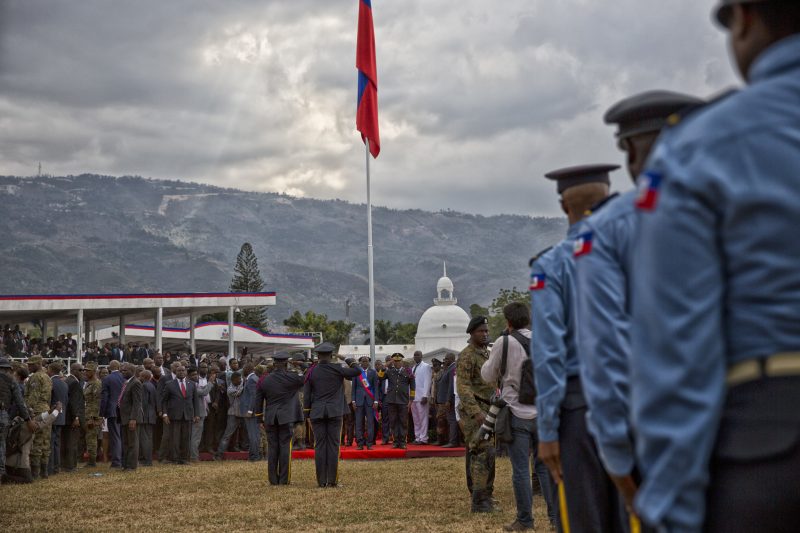 Jovenel Moïse speaks at his inauguration as President of Haiti, after taking the oath of office. United Nations Photo on Flickr, dated February 7, 2017, CC BY-NC-ND 2.0.

His presidency has been marred by scandals and recurring protests but Jovenel Moïse has, so far, weathered every storm. Haiti, however, has been paying a heavy price under his leadership, including rampant insecurity, kidnapping and gang activity, recurrent fuel shortages, high rates of inflation, and insignificant economic growth.

The country is again mired in violent protests calling for the president's resignation, as he has been accused of overstaying his constitutional five-year term in office, which the opposition says should have ended on February 7.

Moïse has proven himself a political phoenix of sorts, managing to rise from the ashes of every scandal. First, he escaped the spiral of social discontent that erupted in July 2018 following the PetroCaribe scandal and his government's decision to increase fuel prices, but the first set of demands for his resignation would come later on, in February 2019. For two weeks, major cities around the country were paralysed by protesters asking for systemic change or “tabula rasa” (clean slate).

By May 31 of that year, Haiti's High Court of Auditors released a 600-plus-page report that delved deeper into the high-level corruption surrounding PetroCaribe, including President Moïse's personal association through his firm Agritrans, and another one called Betexs.

Protests at the time also centred around the increase in gang activity and the denunciation of massacres planned by officials belonging to the inner circle of the president.

As 2019 drew to a close, the country was once again in crisis. Along with the political opposition, almost every sector of Haitian civil society was crying for Moïse to resign. During this long period of “peyi lok” (lockdown), everything—including hospitals, banks, schools and markets—was practically shut down. At some point, the streets became tired and Moïse regained the upper hand.

Moïse's staying in power beyond the February 7 deadline touted by opposition groups has escalated Haiti's political crisis to a whole new level. Ever since January 13, 2020, when the president dissolved parliament—even though he was the one who failed to organise the elections required to renew parliamentary sittings—Moïse's political adversaries have had their eyes set on February 7 as their day of comeuppance.

It is a significant date: February 7, 2021 marked 35 years since the country broke from more than two decades of dictatorship to move into a new era of democracy, but it has been a bumpy road.

According to Moïse and his camp, he was sworn in on February 7, 2017 and, based on Articles 134.1 and 134.2 of the Constitution, his five-year term will end in 2022, but the opposition—along with many civil society actors and institutions—interpreted the same legislation differently and believe his term expired on February 7, 2021.

The political chaos expected to take shape on February 7 did not happen. Before addressing the nation later that day, Moïse quietly flew to Jacmel in southeast Haiti to enjoy the city's traditional Carnival, which always takes place the weekend prior to the national Carnival celebrations.

Outmaneuvering his opponents, Moïse looked jubilant and relaxed as he talked about how intelligence services were able to foil a plot to assassinate him that day, an allegation which led to the arrest of 23 people, including a police inspector, and a supreme court judge who was released last week.

For his part, Moïse has characterised the opposition as power-hungry promoters of chaos who refuse to go to elections:

The democratic process will go to the end and will not be modified for a transitional regime, outside any democratic rule. This is not how democracy works.
@PCitizen @JoutheJoseph @MCHaiti

In response to the Mecene's nomination, Moïse dismissed three supreme court judges (including Mecene) and replaced them with new appointees, a move that has reignited public protests against what many liken to a return to “dictatorship”.

On February 14, while President Moïse was in Port-de-Paix in Haiti's northwest to launch the national Carnival, residents of the capital, Port-au-Prince, took to the streets to demand he step down.

According to protesters, Moïse is now acting as an illegal, unconstitutional president, since his mandate expired on February 7:

This is what pro-democracy protests looked like in #Haiti‘s capital at their peak today. This immense crowd estimated at over 100,000 stretched for blocks. Their demands are @moisejovenel step down and a transitional govt organize free & fair elections. pic.twitter.com/jOg8iYoT1d

This is no small march, look at all those people!! Haitians are marching for democracy & against dictatorship NOW#Haiti #LanmouPouAyiti #AbaDiktati #democracy #prodemocracy #Protest https://t.co/jvngCXojJ9

Throughout his troubled presidency, Moïse has been able to rely on the support of foreign allies, most significantly the US State Department, the Core Group and the Organization of American States (OAS).

It's no different this time. Aside from the US Congress, which is advocating for a transition government, Moïse has the support to finish his term in 2022 as his supporters, especially the United States, seem to only pay lip service to opposing his anti-democratic abuses.

There was hope that the Biden administration would change from its predecessor's foreign policy stance on Haiti, but so far, this hasn't been the case:

@BINUH_UN @UNHaiti @USEmbassyHaiti @AmbCanHaiti @ambafranceht all of the core group, did you hear the voice of the people today? Or will you continue to pretend that your puppet, wannabe #Dictator is doing a great job? Will you still pretend that people are paid to protest? pic.twitter.com/qUt1aqvKA8

Even with the opposition's naming of an interim president, Jovenel Moïse remains in place while protesters continue to demand that he vacate power. As yet, there are no clear signs that the real steps are being taken to tame this crisis.

As all the actors—including the international community—seem convinced that each of them holds the right recipe for either democratic stability or real change, Haiti's longstanding political crisis has hit a new impasse.