Of love, life, displacement and Palestine, his words touched millions 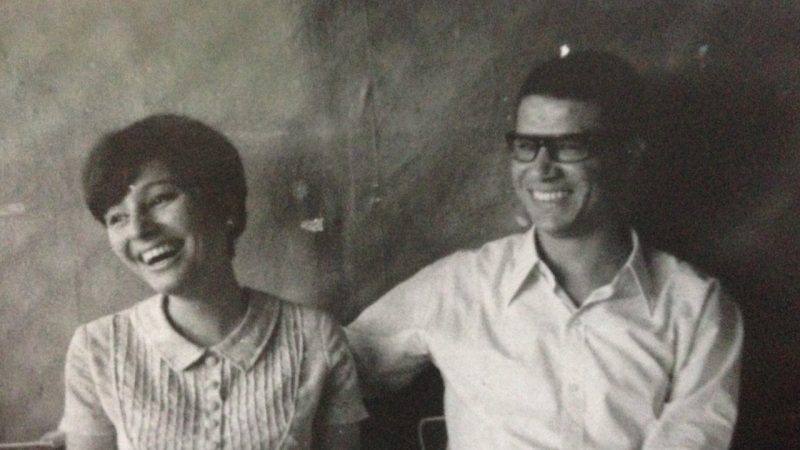 Picture from Mourid Barghouti's Twitter account, showing him with his late wife Radwa Ashour: a love story cherished across the Arab world. Caption reads: “On the afternoon of July 22, 1970, we became a family. Her laughter became my home”

Beloved leading Palestinian poet Mourid Barghouti passed away on Sunday at the age of 77 years, sending waves of grief across a wide fan base in the Arab world over his departure, and seeing through a prophecy he had long made:

I am four years older than Israel, and I will surely die before my country is liberated from the Israeli occupation. My life, most of which I lived in exile, has left me laden with incurable alienation and a memory that nothing could stop.

With somber words, vivid images, melancholic emotions, and meanings of resilience, Mourid's poetry very much pivoted on Palestine and Arab issues. For decades, he told of a yearning to his homeland in Palestine, which he was kept away from for over 30 years since the 1967 Arab-Israeli war, and was then only allowed restrained access to.

Through 12 collections of poems, his writing oscillated between hope, resistance, and despair, dreaming of uniting with a distant motherland, a family dispersed by statelessness, and a love kept away by exile.

In an interview with the Guardian in 2008, he was quoted as saying:

The dilemma of Palestinian writers, that we're expected to address the needs of people denied self-expression under occupation, to express their pain. But this is a trap: you have to strike a balance, not sacrificing the aesthetics for your readership. I hate the terms “resistance poetry” or “exile poetry.” We're not one-theme poets. A moment of joy or misery is juxtaposed by its opposite. There's no one face; I see both. I question myself all the time; if you oversimplify, you'd better quit.

His memoir “I Saw Ramallah”, which was the first to introduce him to global readers, was described by Edward Said, the celebrated intellectual and academic, as “one of the finest existential accounts of Palestinian displacement.”

Born in 1944 in the West Bank's mountainous village of Deir Ghassaneh, near Ramallah, Mourid was exiled from Jordan for 20 years, Lebanon for 15 years and Egypt for 18 years, separating him from his Egyptian wife, the late novelist and lecturer Radwa Ashour, and his son, poet Tamim.

Aside from his poems on social and political issues spanning the Arab world and of Arab citizens’ daily struggles, Mourid and Radwa's love story has become a romance cherished by a wide audience across the region.

Mourid Barghouti gave us his passion and pain for the homeland. He gave us his pure love for Radwa. He gave his words which resonated with our Syrian Nakba. He gave ‘I Saw Ramallah’, which spoke to me above all else in my own interaction with my heritage. Rest in peace, Mourid. pic.twitter.com/Dc72CsCEdj

The timeless love between Mourid Barghouti and Radwa Ashour — as traced through their literary works — is one of the twentieth century’s great love stories… We lost another great soul in this earthly realm- May they reunite in their radical love and both rest in power. pic.twitter.com/wcnuib4xLL

Mourid's literary brilliance resonated across a massive audience across the world, who shared his longing for a liberated Palestine and a free voice.

Broken hearted about Mourid al-Barghouti #مريد_البرغوثي Forever etched in my memory: dinner in Amman. It began to rain. You ran out and flung your arms back like a child, spinning around and smiling as you got soaked. Palestine has lost one of our greatest. #MouridBarghouti #RIP

Messages of mourning and heartache, reminisce and appreciations, and excerpts of his poetry flooded social media from across the world to mourn the death of the beloved poet.

“leaving this world as t is,
hoping that, someday, someone else
will change it.” — @MouridBarghouti

Rest in Power, & thank you ? pic.twitter.com/5NaD4v7asY

“Jerusalem. The city of our little moments that we forget quickly because we will not need to remember, and because they are ordinary like water is water and lightning is lightning. And as it slips from our hands it is elevated to a symbol, up there in the sky.” Mourid Barghouti

We lost @MouridBarghouti , a huge loss for #Palestine, may you rest in peace knowing that you spoke up for your country through exceptional literary brilliance. You'll never be forgotten across all generations, you'll legendary work will keep you alive.