Nearly six centuries after his birth, who owns Alisher Navoiy, the ‘father of Uzbek literature?’

How an Afghanistan-born poet became a national symbol in Uzbekistan 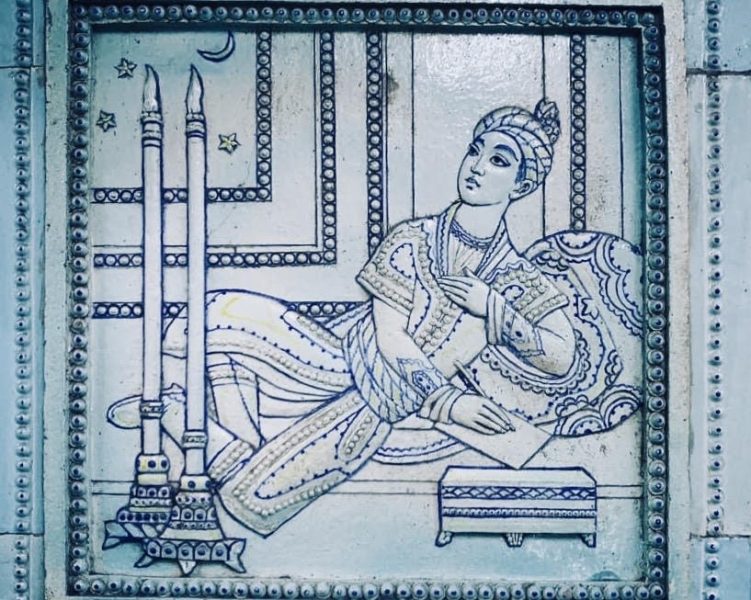 Alisher Navoiy metro station in Tashkent decorated with art evoking the 15th-century culture of the poet. Photo by Filip Noubel, used with permission.

February 9 marks the 580th anniversary of the birth of Alisher Navoiy, a 15th-century poet, linguist and thinker who has come to play a central role in the nation-building process of Uzbekistan.

The concept of nations is relatively young in Central Asia, a region that for centuries identified more around religion, important urban centers and language. People defined themselves as being Sunni, Shia, Jewish, or as coming from regions gravitating around key cities such as Bukhara, Samarkand, Kokand, Ghulja, Kashgar where local political and military power concentrated.

Linguistically very mixed, Central Asia has mostly combined two main language families: Persian and Turkic. Persian was the language of the court, of literature and philosophy, but also penetrated Turkic languages with hundreds of words. To this day, many Central Asians are equally fluent in Tajik or Dari, languages belonging to the Iranian group of languages, and Uzbek, Turkmen or Kyrgyz, for example.

Arabic also played a major role in religion, education and knowledge, while Russian entered the space as a colonial language in the 19th century.

As for Turkic languages that evolved over time into separate modern languages, known today as Karakalpak, Kazakh, Kyrgyz, Tatar, Turkmen, Uyghur or Uzbek, they all shared a common literary language known as چغتای or Chagatai, written in the Arabic alphabet, and used from the 15th to the 20th century.

Navoiy as a symbol of Uzbek language

Alisher Navoiy was a poet and thinker who is mostly remembered today in Uzbekistan for having championed the use of Chagatai that serves as the foundation for the modern literary and spoken Uzbek language.

Typically, Navoiy was a Central Asian who crossed regions, cultures and languages during his entire life. He was born in 1441 in Herat (now in Afghanistan), studied in Masshad (a city in Iran) and Samarkand (located in Uzbekistan), and died in Herat, where he is buried. He was a polymath who constructed buildings, served the local political power, and wrote in three languages (Chagatai, Persian and Arabic), mostly poetry. One of his most famous works is the Muhakamat al-Lughatayn, (known in English as the “Judgment Between The Two Languages”) a treatise in which he compares the merits of Persian against Chagatai and concludes that the Turkic language is superior.

Such a statement was unusual, to say the least at this period, given the prestige attached to Persian and the relative lack of texts written in Chagatai. This is why Navoiy is celebrated in the Turkic world, and especially in Uzbekistan, as the father of Uzbek literature. He took his pen name from the word “navo” which means melody, a poetic aspiration reflected in his ghazals, the short poems largely inspired by Sufi imagery in the Muslim world. His most famous works include “Xamsa” (“The Quintuple), a collection of five epic poems that includes cult love stories, such as Farhad and Shirin, or Layli and Majnun, and the “Lison ut-Tayr”(“Language of the Birds”). He also wrote treatises to help other poets write in the Chagatai language, and embrace the Turkic heritage.

A 1947 Soviet movie by Tajik director Kamil Yarmatov, called “Алишер Навои “ (Alisher Navoiy) and available in both Uzbek and Russian, embodies his image as a key figure in the nation-building process of a Soviet, albeit Uzbek, identity. The movie had cult status in the Soviet Union and includes a part, in the 21st minute, where Navoi defends the importance of a “Turkic language that can unite the people”:

Who owns Navoiy in today’s Uzbekistan?

One of the key priorities of Uzbek authorities since the demise of Islam Karimov who ruled the country with an iron fist from its late Soviet period to 2016, has been a rebranding of the image of the country, emphasizing its potential for tourism along the Silk Road. Shavkat Mirziyoyev, the current president, is very keen on relying on cultural symbols to present his country as an attractive destination for both tourism and investments. Thus the 580th anniversary of the birth of Navoiy is given particular attention through events inside and outside the country. The poet is already very present through statues, streets, a university, a scholarship, a metro station and a theater named after him in the capital, Tashkent, countless books and his place in the school curriculum. This video, marked with the trending hashtag #navoiyiftixorim in Uzbek (meaning #NavoiyMyPride) displays images of landmark places and monuments associated with the poet, accompanied by readings of his poetry:

But while those celebrations remain official and very much in the hands of the government, as during the Soviet period, some call for more diverse ways to celebrate Navoiy.

In Uzbekistan, there are no small international festivals of poetry, or writers. The many calls I have made to establish a Navoiy Institute abroad are being ignored. There is no private-public partnership in the area of the arts, culture and literature. If those fields are to develop, they have to be independent, that is entirely outside of the sphere of the state, as it is done in Europe and the US. For that, we also need normal laws, for example, if a businessperson or a philanthropist or an organization supports the arts or literature, they automatically get a tax-cut.

While Navoiy has been widely translated into Russian, there is indeed very little translation available in English, complains Obidov who calls for more funds and attention from the government on this task. Meanwhile, he has himself produced a few translations showing the sophistication and complexity of Navoiy’s language and imagery, in the hope that other translators will be inspired to recast Navoiy in their own languages.