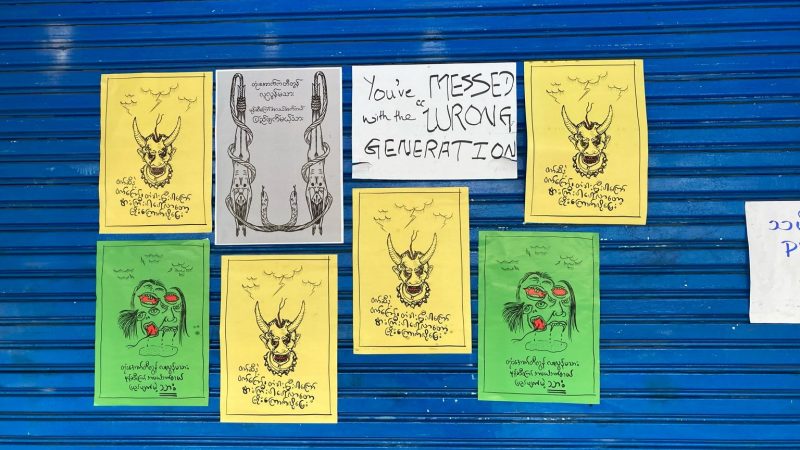 ‘You messed with the wrong generation’, one of the protest visuals posted on walls in various cities across Myanmar. Photo supplied to Global Voices by local researchers, Used with permission

The civil disobedience movement launched in response to the February 1 military coup has continued to gather support across Myanmar.

Communication lines have been intermittently disrupted since the coup and internet connectivity was totally cut off on February 6. When service was restored the following day, the world saw images and reports of massive pro-democracy rallies in the streets of Myanmar cities and towns.

Global Voices interviewed local researchers and foreign residents (whose identities have been withheld for security reasons) about the protest movement. One foreign resident shared this account from over the weekend:

The civil disobedience movement asked the public to go out in the streets on Friday [February 5]. The protests swelled on Saturday. Then internet connection was cut off in the country. Protests continued on Sunday until today [February 7]. Hundreds of thousands participated in almost all regions and cities. Police are deployed in the streets but so far no arrests were made. Protest is peaceful. Meanwhile the Than Pone is still being done every night at 8PM.

Than Pone—which means “iron buckets”—is the name given to the banging of pots to ward off evil spirits. Since the coup, collective pot-banging takes place  three times a day in some areas: at 8am, 2pm, and 8pm, for a total of 15 minutes.

Local researchers told Global Voices that many internet users “got pissed off that the internet was shut down and joined the protest.” One researcher had no internet at home so went out to meet a friend and ended up in the crowd.

They observed that people offered the police flowers, water bottles and snacks during the protest in Yangon on February 6.

These videos shared by the researchers offer a glimpse of the large protest in Yangon, the country's largest city:

A glimpse of the weekend protest in Myanmar. Video shared by local researchers with Global Voices pic.twitter.com/WpbhZsLb6j

Weekend anti-coup protests gathered thousands in Yangon and other cities in Myanmar. Video taken by local researchers and shared with Global Voices pic.twitter.com/JwZWZHoxCR

Disinformation has been rampant since the coup. One of the most notorious sources of disinformation is Radio Free Myanmar, which mimics the logo and naming convention of the news website Radio Free Asia.

When you don’t have internet for two days, there is no way to verify those news. Even politicians starting to believe those are rumours.

They were referring inaccurate reports circulating outside Myanmar based on discussions taken place on Chinese social media platform Weibo, such as the military’s supposed readiness to repatriate Rohingya refugees in Bangladesh, or that soldiers had staged the coup to protecting the people. 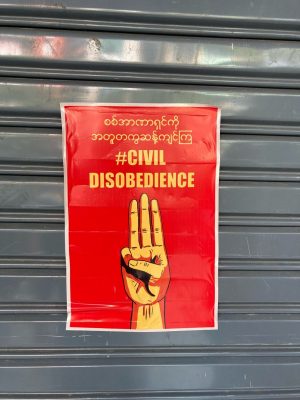 The symbol of the civil disobedience campaign is inspired by the Hollywood film ‘Hunger games’ three-finger salute. Photo supplied to Global Voices by local researchers, used with permission

The researchers also reported that some Buddhist ultra-nationalists have been attempting to mislead coup supporters by claiming that the three-finger salute widely used in anti-coup protests is in fact a Muslim gesture that means “I am the son/daughter of Muhammad.”

The disinformation appears to be a desperate reaction by coup supporters as the civil disobedience campaign gains traction. Here are some photos depicting the defiance of many groups across Myanmar:

UPDATE: Civil servants from the Education and Railway departments in Mandalay, the economic hub of Upper Myanmar, join citywide protests against the military regime on Monday. (Photo: The Irrawaddy) #WhatishappeninginMyanmar pic.twitter.com/Pds0nE7WTT

UPDATE: Thousands of people in Karen State joined a nationwide general strike against the military coup on Monday. Protesters have been marching towards the Karen State government office in Hpa-an since 8 a.m. #WhatishappeninginMyanmar pic.twitter.com/S1Hum5hCUm

Government workers from Ministry of Ethnic Affairs hold the signs with red ribbons as a symbol of resistance against the #militarycoup during a strike named civil disobedience campaign in front of their ministry headquarters, #Naypyitaw, #Myanmar, 05 February 2021. EPA-EFE pic.twitter.com/gUiMMCQ91L

Today the people of Myanmar are rising up against the military regime, demanding democracy. This is no longer a protest. It's an uprising. Public nurses, school teachers and forestry officials are taking to the streets to join #2021uprising #WhatsHappeningInMyanmar #MyanmarCoup pic.twitter.com/8Cv52hOqpA

Teachers and students of Myanmar Mercantile Marine College flash three-finger salute and sing a song as they against the #militarycoup in Yangon, #Myanmar, 05 February 2021. EPA-EFE/NYEIN CHAN NAING pic.twitter.com/TbXSJ4pmdJ

Even Japanese beer giant Kirin was forced to sever business ties with the military after the coup.

The Burmese Ghouls, a professional esports team that rarely comments on politics, publicly condemned the coup.

In response to the week-long protests, Myanmar military authorities have banned public gatherings of more than five people in some townships. The police also used water cannons to disperse a protest in Naypyidaw, the country's capital.

These two recent developments will certainly affect the trajectory of the protest movement in the coming days.