The whereabouts of at least 40 Kurds remain unknown 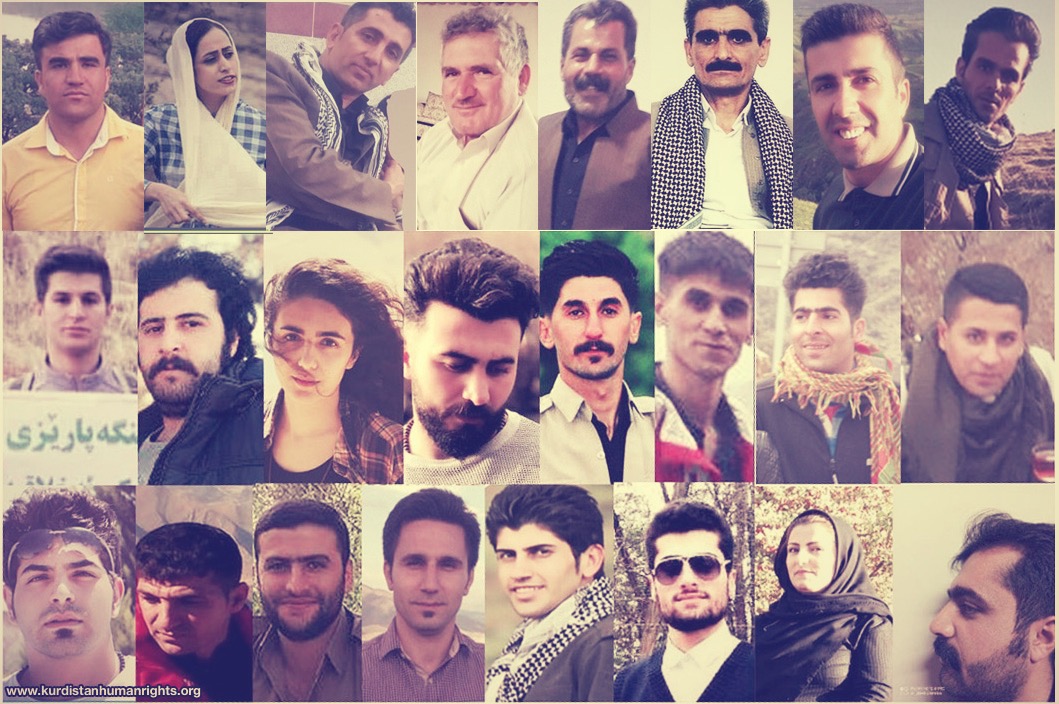 A collage by the Kurdistan Human Rights Network showing some of the arrested Kurdish activists. Global Voices given permission to use it.

With the turn of 2021, the Islamic Republic of Iran has unleashed the latest chapter of repression against its Kurdish population, carrying a wave of arbitrary arrests targeting Kurdish civil society activists.

According to reports, since the beginning of 2021, at least 91 Kurdish citizens, including human rights activists, environmentalists, and artists, were arrested or, in other words, “disappeared by security forces,” in different cities from Tehran to Sanandaj, the capital of Iran's Kurdistan province.

A joint letter initiated by the Switzerland-based Kurdistan Human Rights-Geneva (KMMK-G) and published on February 3, said a few detainees have been released but 89 others remain behind bars, and at least 40 have are being subjected to enforced disappearance.

More than 50 Kurdish activists have called on the Iranian state to immediately release those detained.

The state of Iran has long persecuted its Kurdish minority. A 2008 Amnesty International report cited examples of “religious and cultural discrimination against the estimated 12 million Kurds who live in Iran and form around 15 percent of the population.”

Global Voices interviewed Taimoor Aliassi, co-founder and executive director of the Switzerland-based Association of Human Rights in Kurdistan (KMMK-G), in order to understand what is driving the regime's crackdown this time.

The interview has been edited for brevity and clarity.

What are the reasons for the recent arrests?

Before answering this question, it's necessary to note that the causes and scale of repression and violence in Iran against Kurdish people and other minorities are inherent to the inception of the Islamic Republic.

In August 1979, Ayatollah Khomeini, Iran’s then supreme leader, declared a holy war against Kurdish people and framed the Kurds as anti-Islam and anti-revolutionary because they simply were in favour of establishing a secular and democratic state in Iran. Since then, the Kurds have been stigmatized, marginalized and excluded from any participation in public life and perceived, and treated, as a hostile group by the Iranian state and its media.

Answering your question, since the beginning of January, along with the recent coordinated crackdown and mass arrests of Kurdish citizens, we are also witnessing a campaign of intense stigmatization, demonization, and criminalization of Kurdish citizens by Iranian media (Seda va Sima and Fars News). The Islamic Republic of Iran’s system of government heavily relies on violence and the spread of fear.

Given the internal political, economic, socio-cultural, environmental, and health crisis facing the regime and its incapacity to solve the Iranian challenges, we believe that the regime is fearing to lose control over its people, and the best way to show that it’s still on the reign and to keep on top, is the intensification of violence and repression, especially in the ethnic and marginalized territories. As such, since January, 16 Baluchi citizens were executed and five Ahwazi-Arabs prisoners are at imminent risk of executions.

Are there any organizational links between the arrested individuals? Were they involved in a common project for example?

The detainees are members of civil society and they include students, environmentalists, cultural activists, musicians, and academics. For instance, five of the female detainees are all members of a Kurdish female musical group from the city of Kermanshah called “Gelaris”.

Do you have any information about the detainees and about the charges? Have they been able to contact their families or contacted the lawyers?

The fate and whereabouts of 51 of the detainees are yet unknown. During the arrests, the houses of 31 detainees were searched and the belongings of five of them were confiscated by security forces. Five others were victims of physical assaults during their arrests.

Families of the 51 persons subjected to enforced disappearances have been subjected to continuous threats by the Revolutionary Guard when they seek information about their loved ones, and are told to avoid any communications with the media and UN agencies. They are also told that the detainees are not allowed to have access to a lawyer during investigations, which increases the risks of extracting confessions under torture. The families are extremely concerned about the fates and whereabouts of their loved ones and the Iranian authorities have refused to provide information about the detainees.

Such state measures constitute a clear violation of Article 14 of the International Covenant on Civil and Political Rights (ICCPR) to which Iran is a party, as they severely limit access to lawyers and legal defense. Beatings, ill-treatment, torture, incommunicado detentions, enforced disappearances, and arbitrary arrests of the detainees are all infringements, not only of the ICCPR, but also the Iranian law.

A group of Kurdish civil and political activists wrote a statement protesting this wave of mass arrest. Have other non-Kurdish Iranian activists joined this protest?

Currently, we have initiated and published on February 3 a joint statement, supported by 36 civil societies and human rights organizations including Amnesty International and Human Rights Watch (HRW), calling for the international community's urgent attention to the ongoing wave of arbitrary arrests, incommunicado detention, and enforced disappearances by the Iranian authorities, targeting scores of people from Iran’s disadvantaged Kurdish minority.

According to this joint letter, few detainees have been released, but “89 individuals remain detained, at least 40 have are being subjected to enforced disappearance.”

What impact do you think these international organizations can have on this situation?

We hope that pressure from the UN, EU, and the international community pushes the Iranian authorities to stop their campaign of demonizing and intensified repression against Iranian ethnic and religious minorities, as well all Iranian citizens.

The Kurdish minority has been under pressure and faced persecution for decades. Last year, hundreds of Kurds got arrested. Is there any difference between this wave of arrest with precedents?

Since 2020, we have observed a new pattern of persecution and the executions of Kurdish political prisoners in Iran by squad firing, group executions and disappearances of the prisoners and their bodies, and denial of the last visitation of the family before execution. This pattern was common in the 1980s.

The secret execution and enforced disappearances of Mr. Hedayat Abdollahpour, a Kurdish political prisoner, on 11 May 2020, in a military base in Oshnavieh, West Azerbaijan Province by squad firing, despite the UN human rights experts’ multiple calls and concerns raised with the Iranian authorities, as well as the group execution of Mr. Saber Sheikh Abdullah and Diako Rasulzadek, exemplifies this new pattern of executions of prisoners belonging to ethnic groups and others in Iran.

The recent crackdown on Kurdish civil society activists indicates this new pattern of persecution and cycle of violence against members of ethnic-religious groups in particular, and in Iran in general. This requires a tougher position from United Nations and Western countries on Iran and the question of  respect for human rights and minority rights in Iran needs to be a main part of EU-Iran new round of negotiations.