A social media blackout persists in Uganda, weeks after the election

The internet was partly restored on Monday, 18th January 2021.

Opposition candidate Bobi Wine's election poster seen on the streets of Kampala, Uganda. Image by James Propa and used with his permission.

Uganda witnessed a total internet shut down on the afternoon of January 13, 2021, on the eve of its presidential election.

Incumbent President Yoweri Museveni, 76, who took power in 1986, following a guerrilla war — and has ruled the country since — ran for reelection.

In a pre-election address, the president had announced the indefinite ban on Facebook in Uganda stating that Facebook was taking sides with the opposition when they banned accounts belonging to the ruling party's supporters.

Telecom company MTN, on January 12, 2021, issued a statement saying they had received a directive from the Uganda Communications Commission (UCC) to switch off the internet:

MTN Uganda informs its esteemed customers and other stakeholders that National Telecommunication Operators in the country, have received a directive from Uganda Communications Commission (UCC) to immediately suspend access and use, direct or otherwise of all social media platforms and online messaging applications over the network until further notice.
MTN Uganda has, in compliance with its National Telecommunications Operator License and in accordance with MTN’s group-wide Digital Human Rights due diligence framework implemented the directive.

The internet was partly restored on the morning of Monday, January 18, 2021, but social platforms remain switched off, with no statement on when they will be restored.

Netblocks’ cost of shutdown tool put the loss to the country at $8.9 million USD for the five days the internet was completely off.

Mutegeki Cliff, vice president of Internet Society Uganda chapter, also tweeted about the cost of digital blackout in the country:

Ugandans are now relying on the use of VPN applications. But some VPNs have been disabled by the government, who have also threatened to arrest any Ugandan found using VPN networks.

Several Ugandans have reported that internet speeds have been greatly slowed, affecting many aspects of business, including banking.

Its been nine (9) days of the Uganda govt blocking social media. The Internet speed is so slow that making bank transactions, uploading videos, tethering laptop to phones is nearly impossible. Accessing Google Drive and Google Docs is impossible without a VPN.#KeepitOn pic.twitter.com/0grqhl2Ys7

Ironically, some government organizations like the Uganda Police Force are still using social media to communicate with citizens who are officially locked out from social networking platforms.

On January 26, Uganda police tweeted a statement about a murder case:

.@Patrickonyango1 “Police in Entebbe are investigating a case of murder by shooting of a one Kyeyune Erica, a boda boda rider who was shot by a yet to be identified person”.https://t.co/Tog1ohWyD5

Social media in Uganda is a backbone for communication among friends and family and there is a boom in digital marketing for young people running small businesses such as those dealing in food, beverage, fashion and music.

These small businesses rely heavily on social media because they cannot access mainstream media due to high advertisement charges. 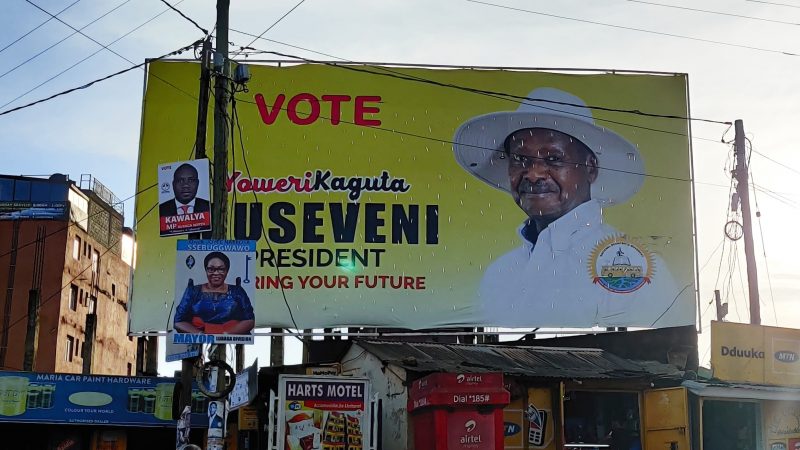 Election campaign billboard of incumbent Museveni in Kampala, Uganda. Image by James Propa and used with his permission.

The election results were fully tallied and announced on the afternoon of Saturday January 16, with the incumbent President Museveni winning it with 58.4 percent, followed by Bobi Wine, with 35 percent of the 10.7 million votes cast.

The internet shutdown greatly affected the campaign efforts of Bobi Wine, who had just launched his National Unity Platform party months before the election with very few grassroots structures in place to secure his votes. Wine launched the Uvote app which was meant to be used by the netizens to document any voter fraud and upload copies of results, photos and videos of election malpractice.

Wine was confined under house arrest by the military and police until the night of January 25, following a court order that asked them to vacate his premises.

Several of his party members like musician Nubian Li are still in jail facing court martial over allegations of possessing military equipment.

Below is a political song called “Uganda Zukuka” which translates to”Wake Up Uganda,” by Bobi Wine and Nubian Li:

Bobi Wine in a statement alleged that the elections was “marred with massive irregularities including state inspired violence”:

Unfortunately, Museveni yet again committed a coup against the Constitution and the people of Uganda… Like most National and International bodies have noted, this election was marred with massive irregularities including state inspired violence, intimidation and harassment of my supporters, myself and other opposition candidates, ballot stuffing with pre-ticked ballot papers in favour of Museveni, alteration of Declaration of Results Forms, Confiscation of Declaration Forms from our agents by Security Personnel, flawed tallying processes, etc. In many districts across the country our agents were picked from polling stations and detained. To date, many of them are still missing.