'Impunity continues to prevail on human rights violations in Zimbabwe' 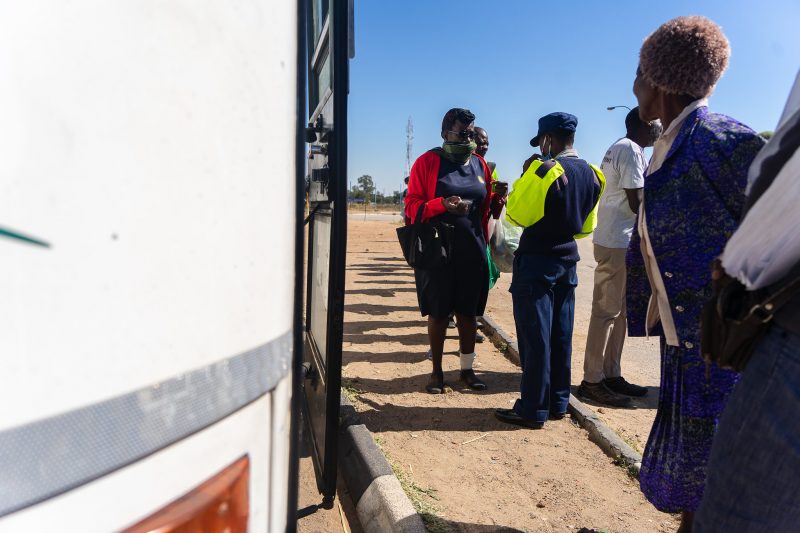 A police officer checks a commuter's pass before allowing her onto the bus. Since the announcement of the COVID-19 lockdown, Zimbabweans are required to carry passes which prove that they are essential workers. Image by KB Mpofu / ILO, Bulawayo, 20 April 2020 (CC BY-NC-ND 2.0).

Journalist Hopewell Chin’ono and two opposition politicians, Job Sikhala and Fadzai Mahere, were arrested on January 8, 9, and 11, respectively for tweeting about police brutality.

Chin’ono, Sikhala and Mahere tweeted about an incident that occurred in a taxi rank in Harare, the capital, where a police officer had allegedly “beaten an infant to death while enforcing COVID-19 regulations,” as the mother carried the child on her back, the East African newspaper said.

“A video of the incident went viral with the mother wailing while holding [on]to a police officer who allegedly assaulted her baby to death,” reports the Zimbabwe Observer newspaper.

As Chin’ono and Mahere were being arrested, they respectively tweeted about their ordeal:

They say they are charging me with communicating falsehoods for tweeting that a child had been beaten up and died by a police officer! They are taking me to the Law and a order section at Harare Central Police Station.

Arrested. This regime will never break my spirit.

Sikhala also alerted the public about his impending detention:

I have received information that the Mnangagwa regime wants to arrest me today for the offence which I don't know. They are alleging that I undermined the authority of the police by Twitting about the kid allegedly assaulted by them. I have alerted everyone.

The police later refuted claims that the baby was killed, pointing out that the baby had gone for medical examinations and had no life-threatening injuries.

The three were charged for publishing or communicating falsehoods prejudicial to the state by contravening Section 31(a)(iii) of the Criminal law code, which reads:

Any person whether inside or outside Zimbabwe publishes or communicates to any other person a statement which is wholly or materially false…realizing there is a real risk or possibility of undermining public confidence in a law enforcement agency…or the Defense Forces of Zimbabwe…shall whether or not the publication or communication results in a consequence referred to (above), be guilty of publishing or communicating a false statement prejudicial to the state and liable to a fine…or imprisonment for a period not exceeding twenty years or both.

They face a 20-year jail term, if convicted.

Mahere was released on bail by Harare magistrate Trynos Utahwashe, on January 18, after spending seven days in state custody.

Legal think tank Veritas argues that the trio was unlawfully arrested and that their charges were unconstitutional. “Why then are the three being charged with contravening Section 31(a)(iii), which is not and has never been a valid law?” affirmed Veritas.

“It must be understood that the section did not become a nullity when the constitutional court declared it void. It always was a nullity as it contravened the former constitution; the court’s declaration was simply a statement of preexisting    legal fact,” said Veritas in a statement.

Section 3 of the former constitution stated that “the constitution is the supreme law of Zimbabwe, and if any other law is inconsistent with this constitution, that other law shall to the extent of the inconsistency, be void.” Section 2 (1) of the present constitution is very much the same. “Why then are the three being charged with contravening section 31(a)(iii), which is not and has never been a valid law?” Veritas said.

Zimbabwe's old constitution was promulgated at independence in 1980. However, the referendum of March 16, 2013, approved a new constitution for the country.

Chin’ono and Sikhala were denied bail on January 14. Both are still being held in police custody, amid fears of getting infected with COVID-19.

The current pre-trial detentions, delays of proceedings & bail denials without serious charges are questionable, especially in times of #COVID19. The infection risk in jail is high due to overcrowding & lack of hygiene. We know this because we support prisons through @VSOZimbabwe pic.twitter.com/wvSPPmdZPe

Chin’ono is no newcomer to Zimbabwe’s jail.

On July 20, 2020, he was arrested and accused by the government for inciting violence by tweeting in support of anti-government protests — a plan later squashed by security forces on July 31, 2020. Opposition MP Sikhala was later arrested on August 21, 2020, for promoting the same protest. Both were charged with inciting the public to violence.  Chin’ono and Sikhala were released on bail in September 2020.

On January 19, 2021, the European Union Mission warned against the “impunity” that has characterized human rights violations in Zimbabwe:

Two years on, investigations are lacking and impunity continues to prevail on human rights violations perpetrated in #Zimbabwe in January 2019. #NoZIMpunityhttps://t.co/zHMZDmz8aV

On January 17, 2019, riots broke out across the country after President Emmerson Mnangagwa announced a sudden fuel price increase of 150 percent, resulting in days of violent demonstrations. According to Human Rights Watch, up to 17 people were killed and several others injured and arbitrarily detained after security forces used excessive lethal force:

A crackdown by security forces against protests in Jan 2019 resulted in the deaths of 17 Zimbabweans. Two years on we continue to call for accountability and on the govt to enact political and economic reforms that will benefit all Zimbabweans #ActiononReform #StandUp4HumanRights

The EU statement comes against a background of continued arrests of dissenting voices.

Despite a military led change of guards which resulted in the resignation of the government of the late Robert Mugabe in November 2017, the country has continued to witness a litany of rights abuse cases. This has negatively affected Zimbabwe’s image as a good investment destination.

Citizens’ hopes for a better economy and respect for human rights were raised with the ouster of Mugabe. He had long ruled Zimbabwe since 1980 with an iron fist.

However, four years after the coup, the situation has only worsened. The main opposition continues to be brutalized by state security, both through legal and extralegal methods.