Some protested on TikTok, others rallied in snow-covered streets. 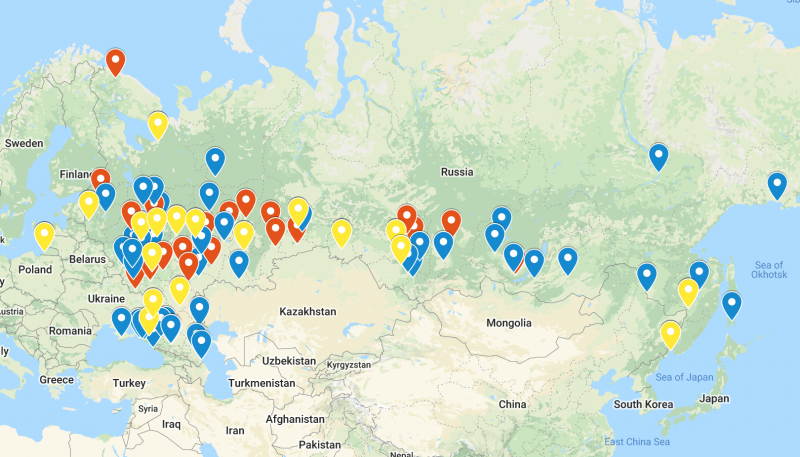 Screenshot from Google Map of protest rallies in Russia on January 23, 2021, created by András Tóth-Czifra, used with permission.

On Saturday, January 23, thousands of Russian citizens braved the winter cold to join protest rallies against the imprisonment of opposition leader Alexey Navalny. Navalny, who flew back to Russia from Germany on January 17, after recovering from an alleged poisoning attempt, was promptly arrested upon landing and is currently in pre-trial detention in the Matrosskaya Tishina prison in Moscow. The Russian authorities have accused Navalny of violating the terms of his probation in a previous embezzlement case, and he is set to remain in custody until February 15.

Despite Navalny's detention, his team managed on January 19 to release a new anti-corruption investigation, a feature-film length YouTube video describing a luxurious palace near Gelendzhik, in the South of Russia, allegedly built for the Russian President. The video, which currently has close to 80 million views, added fuel to the fire ignited by Navalny's arrest and his appeal to the public to join the Sunday protests.

While Navalny's return to Russia and his subsequent detention caused an outcry on RuNet's most popular social media platforms – Facebook, Twitter, VKontakte – it also resonated with younger users on newer platforms such as TikTok. Users published multiple TikTok videos encouraging others to join the protests and sharing tips on protest security. Other videos showed students replacing portraits of Putin on school walls with a photo of Navalny.

“I'm afraid for myself, but I'm even more afraid for my country”. TikTok users call for “going for a walk” on January 23, give advice on how to behave on that day, remove Putin's portraits from school walls and create fancams with Navalny's speeches.

While many of the videos are humorous in nature, a good few are earnest in expressing their opinions, and the most popular among them have racked up hundreds of thousands of views. According to a report from Riga-based independent Russian media outlet “Meduza”, TikTok videos with the most popular protest-related hashtags (such as #January 23, #FreedomForNavalny, and #LongLiveNavalny, translated into English) quickly gathered more than 200 million views.

Alexey Navalny himself has a vast social media presence across platforms, and now also boasts his own TikTok account – but hasn't posted anything about the Saturday protests there.

In response to the flood of protest-related content, and at the request of the Attorney General, Russia's federal internet monitoring and censorship agency, Roskomnadzor, demanded on January 20 that TikTok remove “all content calling for minors using the social network site to participate in illegal mass protest events.” The request did not specify which events they were referring to. Similar requests were made of other social media platforms. The Russian Education Ministry cautioned parents in a VKontakte post to prevent their children from attending rallies, echoing concerns about the safety of the events.

In the run up to the Saturday protest rallies, Roskomnadzor reported that social media platforms, threatened with fines of up to 4 million rubles (US$54,000) began to remove posts containing “calls for children to participate in illegal mass events” in response to its demands.

On Friday, January 22, Roskomnadzor alleged that TikTok had deleted 38 percent of the content deemed illegal, Instagram had removed 17 percent of such content, and YouTube – circa 50 percent. While over two thirds of VKontakte pages set up for the Saturday protest rallies have been blocked in Russia, they remain accessible in other countries, and many such pages are also active on Facebook.

Protests go live across the country

On January 23, protest rallies began early in Russia's Far East and across the country's many time zones. In Yakutsk in east Siberia, protesters braved -50°C temperatures. Social media users shared multiple livestreams and recorded videos of throngs of people on the street and the police beatings and detentions.

Multiple media outlets and users have been tracking the turnout at rallies in different Russian cities. Estimates for Moscow, which usually draws the largest crowds, have ranged from 15,000 (according to local media outlet Znak) to 40,000 (estimates from Reuters). Early figures for total turnout put it at over 110,000, but are likely to be updated later. This Google Map, created by Twitter user András Tóth-Czifra (@NoYardstick), collates the various estimates for key protest locations.

Human rights monitor OVD-Info, an NGO monitoring police detentions of protesters and activists, reported that by the end of January 23, a record number of protesters – 3,512 – had been detained at rallies across the country and are now facing criminal or administrative sanctions. Over 50 journalists have also reportedly been detained or prevented from covering the protests by law enforcement.

Over 100 cities, over 3.5 thousand detained across the country. Here are the top 10. We help those detained thanks to your donations. Thank you for your support!

Commentators have noted the scale of the Saturday rallies, both in terms of turnout and in terms of the number of cities across Russia – over 120 – that saw street rallies. Early protest surveys also showed that circa 40 percent of those who joined the rallies participated in the protests for the first time. The level of activity in the usually more “quiet” regional locations and the amount of first-time protest participants could potentially signal greater civic engagement, but at this stage it is too early to predict how sustainable this wave of protest mobilization will be.

Russian opposition activists have called for further protest actions in the coming days.