Which colonial statues are being torn down in Latina America?

For many, destroying statues is another way to demolish, symbolically, the ideas of oppression, slavery and colonialism. 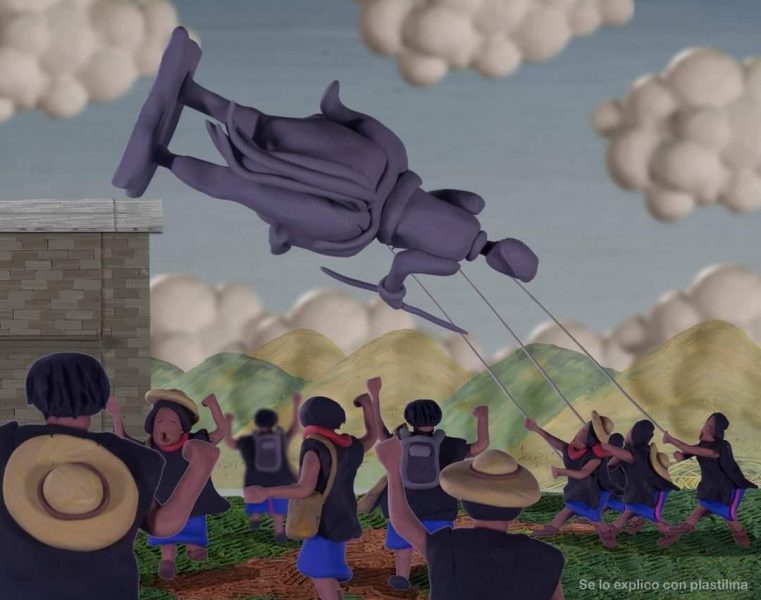 Is it an act of vandalism or a necessary revision to brutal historic events? Online debates around the destruction of public statues seem to have reached a fever pitch during Black Lives Matter protests in 2020, but these acts are far from being a recent phenomenon. While there are fewer documented cases of statues being toppled or modified in Latin America, the past couple of years have seen a rise in activism around public statues in countries across the region. In particular, the anniversary of Christopher Colombus’s arrival to the Americas on October 12 revives old discussions and wounds about Spanish colonization and its effects, almost 530 years later.

In 2019, Mapuche indigenous community members tore down statues of Spanish conquerors, such as Pedro de Valdivia and Diego Portales, in Chile. In 2004, the statue of Colón en el Golfo Triste in Caracas, Venezuela was demolished and replaced with statues of indigenous people. However, the act was called into question because it did not arise at the initiative of indigenous groups, but from alleged interests of politicians at the time.

More recently, in September 2020, a group of indigenous Piurek people demolished the statue of Spanish conqueror Sebastián de Belalcázar — founder of the cities of Cali and Popayán in Colombia's Cauca Department. The statue was located atop the Morro de Tulcán, a sacred cemetery site from the pre-Columbian era.

According to an official statement by the Southeast Movement of Indigenous Authorities, the decision was made after the Piurek held a symbolic trial of Belalcázar for massacres and crimes against indigenous people, as well as the dispossession and appropriation of their lands and inheritances.

The downfall of the Belalcázar statue occurred in the context of various demonstrations against the historical violence and threats committed against indigenous groups, including the recent wave of assassinations of some of their leaders. The Piurek demand that the Belalcázar statue not be restored, as the mayor of Popayán stated, but rather that a monument of someone who “redignifies” the identity of their peoples be erected.

A month later, on October 10, in Mexico City, a statue of Christopher Columbus was removed by local authorities for maintenance. Since it was made two days before the commemoration of the arrival of Columbus to America, it was speculated that the decision was a reaction to fears that the statue may be taken down. A few months before, a call was made on the internet to request that the Government of the Mexican capital remove the sculptures that pay “homage to colonialism.”

Two days later, a group of activists from the organization Mujeres Creando took to the Plaza de Isabel de Castilla in La Paz, Bolivia and renamed it and renamed it Plaza de la Chola globalizada (Plaza of the globalized Chola). Isabel I of Castile financed Columbus’ expedition in 1492. During the demonstration, protesters adorned the statue clothes typically worn by Cholas, or indigenous Bolivian women. 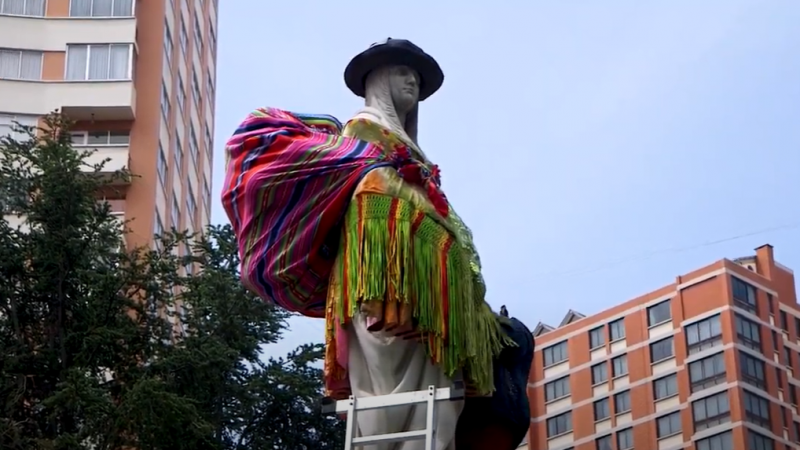 María Galindo, founder of the organization that led the protest, claimed to have received a variety of criticisms for the act which she associates with deeply rooted racism in Bolivian society.

In an interview in El País, the activist claimed they intend to make visible the consequences of colonialism and to question notions of beauty and worth that disparage indigenous women:

“Spanish colonialism brought the idea of the white woman […] as the queen, the employer, the owner of the world […] a model of woman, of beauty and virtue, a very specific subject of femininity that works to this day in Latin American societies” and that colonial idea, according to Galindo, created the perception of indigenous women as “the ugly, the unwanted, the one destined for the cheapest and hardest jobs.” 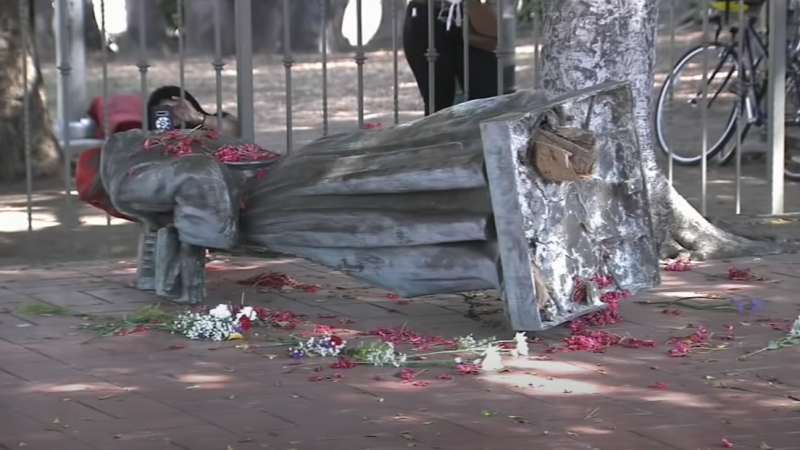 In the United States, where these events have been more frequent, some demolished statues have been figures linked to Spanish colonization. In June 2020, a group of anti-racism protesters in Los Angeles tore down the statue of Fray Junípero Serra — the founder of the first Christian missions in California. Jessa Calderón, an artist and indigenous activist said that “[t] his is only the beginning of the healing of our people’s wounds,” highlighting that the historical imposition of religion was linked to acts of “horror, brutality, and oppression.” For Calderón, “seeing this statue is like forcing a Jewish person to walk past a statue of Hitler every day.”

Scholars and activists weigh in on the toppling of statues

In interviews conducted by the newspaper El País,  professors and activists discussed the significance of these acts. Professor of Hispanic Literature at the University of Southern California Roberto Ignacio Díaz considers that “[t] here is a kind of collective fury (…). Not in a negative sense. It is a rebellion in a positive and epic sense”. While Díaz admits that demolishing statues may be construed as vandalism, he points out that the act may also become a memorable, historic event.

Professor of Political Science at the University of Los Andes Sandra Borda, prefers not to classify these events as vandalism, and proposes to analyze the reasons and messages behind them. Díaz also adds that demolishing statues “…is not erasing history. History is written in books. Monuments, in general, are made to honor the events that a country is proud of and on which it wants to debate”.

History “should always be revisionist”, in the same way that “medicine is constantly updated”, according to Erika Pani, historian at the Colegio de México. History professor Manisha Sinha at the University of Connecticut echoes this sentiment, noting that these processes consist in evaluating whether the statues, present for decades and even centuries, represent the democratic values that currently guide the countries where they are placed.

Mexican Mixe activist Yásnaya Aguilar Gil focuses on the symbolism of the demolition of statues, which “does not always go against a specific character, but against the symbolic charge that it represents”. People also seek to demolish, symbolically, the ideas of oppression, slavery and colonialism.