Howard X says his political performances are to blame 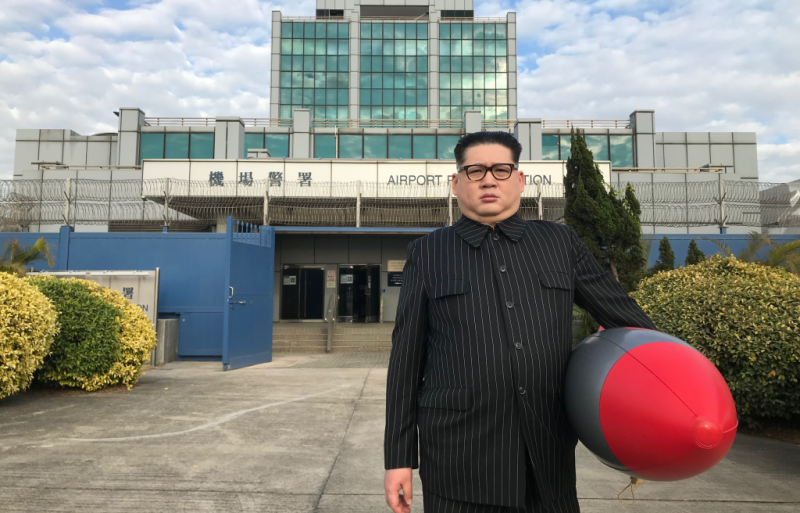 This story, written Cheung Hoi Kit, by was originally published in Chinese on Hong Kong Citizen News on January 21, 2021. The following English version is published on Global Voices under a content partnership agreement.

Hong Kong’s Kim Jong-un impersonator, publicly known as Howard X, published a Facebook post on January 19 revealing that police raided his apartment in October and arrested him for possession of a firearm without a license.

Howard X added that police hasn't pressed charges, and that he was released on bail under the condition he reports to the police station every six weeks.

Along with his Facebook post, the comedian shared a photo of his most recent police appearance, to which he took a toy rocket:

According to Howard X, the police stated that a BB gun with an energy output beyond what is legally allowed in Hong Kong was posted by mail to Howard X in April 2020.

On his Facebook post, however, Howard X says he never received such gun in the mail, and that police didn't find any illegal gun on his apartment during the raid, but he was detained for six hours in the police station.

On his post, Howard says he believes his arrest was related to his political stand and his satirical public performances:

When I challenged them [the police] on the arrest on such ridiculous grounds, they had indicated that the order came from another department higher up and stated they were just doing their jobs.

During my conversations with the police, they also referred to my satirical appearances at public demonstrations that I had made throughout the year in 2020 including my appearance at IFC, July 1st and Oct 1st in support of the democracy protesters, which points to my suspicions that this arrest was not really about the bb gun.

[…]this arrest is being used as a tool not only to harass but to also take my fingerprints (every person who gets arrested has their prints taken) had my iphone confiscated and my home searched.

A few weeks before his arrest, on October 1, when China celebrates its national day, Howard X attached a caricature of Chinese President Xi to a toy rocket during a protest:

Yesterday was the 71st anniversary since #Mao declared the People's Republic of China. Usually in Hong Kong there would be huge protests in the hundreds of thousands, however due to this new national security law and the #CCPVirus there were only a couple of hundred people and pic.twitter.com/vuazPyMc15

On July 1, the anniversary of Hong Kong's return to China, the comedian also publicly appeared with a toy rocket:

Howard X was born in Hong Kong in the late 1970s and grew up partly in the UK and Australia. He is a professional musician when he is not impersonating the North Korean leader, and his band has toured in Argentina, Brazil, and the United States.

He began impersonating Kim Jong-un around 2013 and has been popular on social media since. He told Citizen News in an interview that his performances are meant to stimulate people to reflect on political happenings around them.

Howard X has made appearances in many protests in Hong Kong, including the 2014 pro-democracy umbrella protests and 2019 anti-extradition protests.

He has also performed in other countries, such as the 2018 Pyeong Chang Winter Olympics, the 2018 Singapore Summit, the 2019 Hanoi Summit, 2019 Osaka G7 Summit, among others.

Check out each of the #NorthKorean #Cheerleaders‘ reaction when I surprised them at the Winter #Olympics in 2018 #PyeongChang and caused an international incident. #SouthKorea #김정은 #金正恩 #KimJongUn #SupremeLeader #DearLeader #viral #comedy #satire #political #dictatorship pic.twitter.com/6IP5sn5xsg

Howard X told Citizen News he considers the arrest arbitrary and the bail terms a form of political harassment. He says he will not be deterred from performing:

If I can’t say Free Hong Kong, I can use another expression!

He says Hong Kong being turned into a bad version of Singapore or a rich version of North Korea:

Hong Kong is turning into Singapore, but a bad version of it. In Singapore at least people can afford to live in bigger apartments and there are many market restaurants. We don’t have that now in Hong Kong, cost of living is so high and people are suffering. It is inevitable that people will resist. I would even say Hong Kong is now turning into North Korea, but a rich one. The arrests are so arbitrary and they ban almost everything. It is so ridiculous to criminalize a slogan. I can’t recognize Hong Kong anymore… no human rights, no freedom. The government is very blunt in its rhetoric, the terms it used are like political propaganda, aiming at creating conflicts. In North Korea, its government would use terms similar to “scumbag”. Now when China and Hong Kong criticize other countries, in particular the U.S, they use similar terms. The way Carrie Lam's political camp talk really sounds like North Korean style. How could she say such a thing?

Howard X anticipated that many Hongkongers might leave the city and political tension will keep escalating in the near future. But he urged his fellow Hongkongers to “never give up and continue to do the right thing.”