These small structures were used to slow down police vehicles 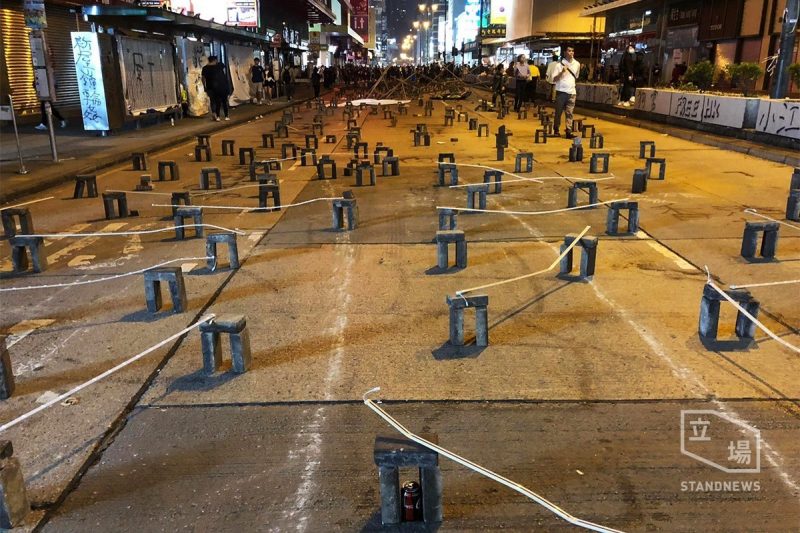 Brick Arches. Image from the Stand News. Used with permission.

This story was originally published in Chinese on the Stand News on January 21, 2021. The following English version was translated by Jonathan Neris and published on Global Voices under a content partnership agreement.

Hong Kong’s protesters’ “Brick Arches” street installation has won the People's Choice Award for the Beazley Designs of the Year, an annual award and exhibition run by London's Design Museum.

The jury’s choice of the overall winner of the 2020 Beazley Designs of the Year was “Teeter-Totter Wall” at the U.S. and Mexico border.

Many of you voted and now here are the results…??️ | The People's Choice Award for #BeazleyDesignsoftheYear goes to… Brick Arches, an ankle-high roadblock assembled in Hong Kong by protestors. ? Was this your choice? >  https://t.co/NDPal24WQw pic.twitter.com/oerRAC9yBv

The “Brick Arches” emerged in Hong Kong's major protest sites around November 2019 spontaneously as protesters made use of handy materials on streets to block police vehicles from entering protest sites. Beazley Designs of the Year’s website has a brief explanation of the design:

Made from ordinary bricks, these small but powerful structures were used by Hong Kong protestors from the pro-democracy movement as roadblocks to slow down police vehicles.
When struck by a wheel, the top block falls away leaving the two remaining bricks, which together form a buttress that prevents the wheel from moving forward. These arches were referred to locally as ‘mini-Stonehenges’ or ‘brick battlegrounds’.
Easier to make and more difficult to clear than ordinary roadblocks, they became widespread when the protests escalated in November 2019.

#Hongkongers would like to express our gratitude to the committee & voters who awarded our bros & sister – BEAZLEY DESIGNS OF THE YEAR PEOPLE'S CHOICE WINNER – Brick Arches. These small but powerful structures were used by #HongKongProtesters as roadblocks to slow down #police. https://t.co/WWmzuxjL3u pic.twitter.com/24svgZF5Sg

The jury’s choice of the overall winner of the 2020 Beazley Designs of the Year was the “Teeter-Totter Wall”, an installation designed by Ronald Rael and Virginia San Fratello with Colectivo Chopeke. The three sets of pink seesaws were installed at the US-Mexico border wall that divides Sunland Park (New Mexico, U.S.) and Ciudad Juarez (Mexico) allowed children from both sides of the border to play together regardless of the wall.

Chief executive and director of the Design Museum Tim Marlow said the Teeter-Totter Wall encouraged new ways of human connection and that “it remains an inventive and poignant reminder of how human beings can transcend the forces that seek to divide us.”

Established in 2008, the Beazley Designs of the Year nominate annually a few dozens of “most innovative and inspiring designs” from all over the world in categories that include fashion, architecture, digital, transport, product, and graphics. This year’s winner under the graphics category was the 3D Rendering of SARS-CoV-2.

This 3D rendering of the coronavirus, created by Alissa Eckert and Dan Higgins, has been named the best graphic design of 2020 by @DesignMuseum. “Using lighting, texture, contrast and colour, Eckert and Higgins give the virus a beautiful yet deadly form.” pic.twitter.com/HgKyYI1ZyA