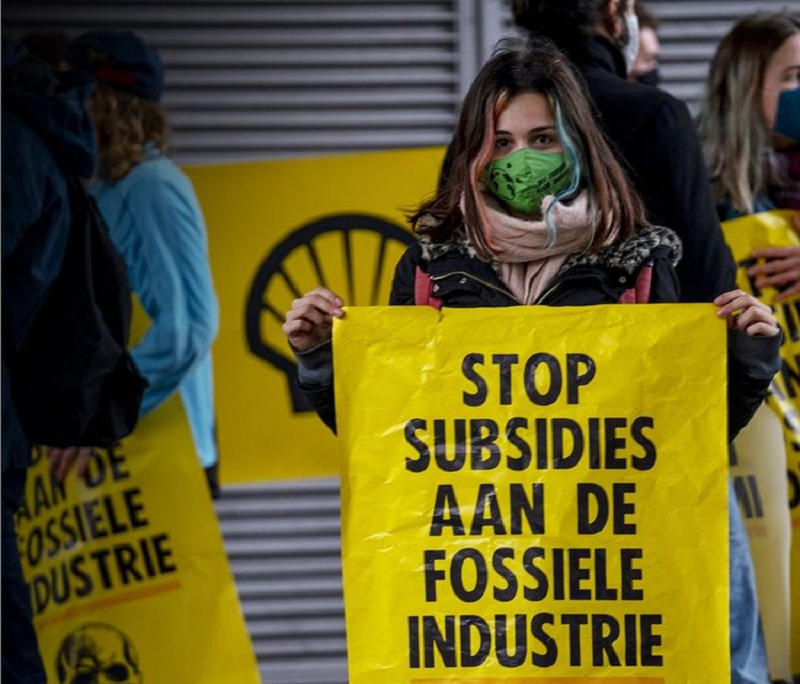 While the world was focused on the inauguration of United States President Joe Biden on January 20, it was also Dutch Minister of Economic Affairs and Climate Bas van ’t Wout's  first day in office. Waiting for him were more than 70 climate activists protesting the government's “mismanagement” of the climate and ecological crisis.

Extinction Rebellion Netherlands (XRNL) blocked the main entrance of the Dutch Ministry of Economic Affairs and Climate in The Hague, and traffic was  redirected to the side doors of the building. XRNL spokesman Lucas Winnips said in a press release:

We are in a climate emergency. The mismanagement of this ministry is a threat to our security and common future. Enormous climate damage is being done here with public funds.

The protestors want the Ministry to stop using public money to subsidize fossil fuels and the Dutch government to release the ‘Shell Papers,’ which are archives of the government's communications with the multinational company. This demonstration is the latest in a string of non-violent actions directed towards the Ministry.

More than 70 rebels from across the country blocked the Ministry of Economy and – oh yes – Climate Affairs. They demanded that the ministry fight the climate crisis. Cutting the billions in fossil fuel subsidies would be a nice first step.

Bearing colorful banners with Extinction Rebellion’s logo, over 70 protestors blocked the Ministry's front door from 8 A.M. Many formed human chains to make it more difficult for the police to remove them. By the early evening, there was a heavy police presence and authorities arrested 23 protestors after some refused to leave, according to local news reports.

Some signposts read: “For rent for green entrepreneurs”, referring to the Ministry's building behind the protestors, “Closed due to mismanagement,” and “I'm afraid of having children because of the climate crisis.” A demonstrator said on the group's Instagram Live that a Climate Ministry worker gave a “moving” speech despite the risk that protesting in front of her workplace entailed.

It is not the first time the climate group demonstrated against the Ministry's policies. On October 20, 2020, XRNL protestors peacefully occupied the Ministry's lobby. That same day, the Ministry released a statement on Twitter inviting the seven protestors for a “meeting in the near future.” It is unclear whether the meeting happened.

After the October 2020 demonstration, XRNL organized “actions on the street” in front of the Ministry's building on November 17, December 5, and December 12. On January 6, XRNL activists wrote the following “scientifically-substantiated findings” on the building's windows with chalk:

The demonstration on January 6 resulted in 15 arrests, reports the NLTimes.

The Shell Papers and the fossil fuel industry

The Dutch government grants billions of euros a year to the fossil fuel industry, mostly in the form of tax breaks. According to a letter by Eric Wiebes, the former Minister of Economic Affairs and Climate Policy, these subsidies amount to 4.5 billion Euros. However, Milleaudefensie, a Dutch environmental NGO, found that the volume of financial aid flowing from the Dutch government to fossil fuels is much higher. In a study published in July 2020, they claim that “the government sponsors large polluting companies with 8.3 billion euros per year.” Both Milleaudefensie and XRNL claim that this funding runs contrary to the Dutch government’s promise to stop subsidizing fossil fuels by 2020.

Shell energy company is also gaining particular attention. The “Shell Papers” is a joint project between journalists from the Platform for Authentic Journalism (PAJ) and Follow the Money (FTM) who are currently investigating ties between the Dutch government and the British-Dutch multinational oil and gas company. Shell is one of the most polluting companies in the world.

PAJ has filed 17 lawful requests to several government bodies demanding the release of “all documents—such as e-mails, memos, policy documents, and even WhatsApp messages—since 2005 that originate from, are directed to, or are about Shell.” According to a story by the PAJ, only the municipality of Assen has complied with the request so far, despite the municipality receiving legal pressure from the Economy and Climate Ministry.

Unlike Germany and Italy, the Dutch “government does not publish an inventory of its fossil fuel subsidies, nor of its environmentally harmful subsidies,” a 2017 report by Laurie van der Burg and Matthias Runkel reports.

Therefore, in addition to a plea for meaningful climate action, the protest was also a call for government transparency regarding the use of public funds and the state's connections to Shell and the wider fossil fuel industry.

There is a @shell employee permanently stationed at the Ministry of EKZ Affairs [editor's note: Ministry of Economy and Climate]. Be honest about this collaboration!

Journalists from @FTM_en have requested government documents on Shell (from 2005, FOI request), the “Shell Papers”, but the ministry refuses.