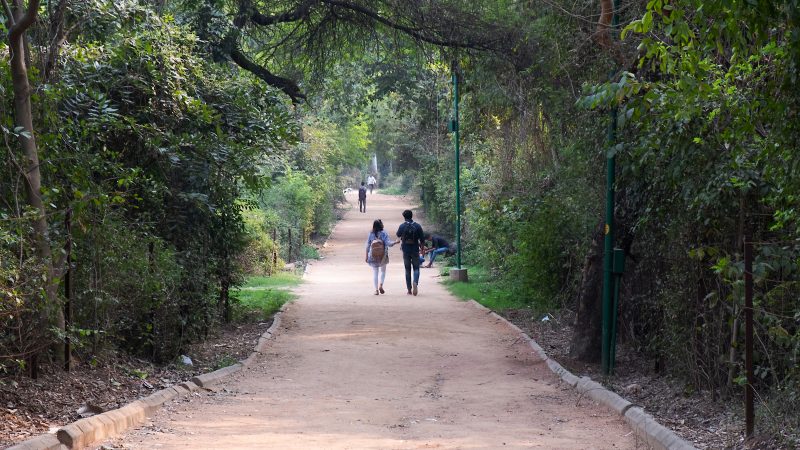 Young couple in a park in central Delhi, 2019. Photo by the author, used with permission.

Societal norms are indeed changing in the country as increasingly more women choose to delay marriage. India is now the world’s fourth-largest user of online dating apps. However, despite the developing social and sexual landscape, attitudes in the medical profession on sexual issues, even in India’s largest cities, are still enmeshed with conservative thinking.

Over the last four years, a campaign called Health Over Stigma ran by Delhi-based youth organization Haiyya, has been challenging this system by linking unmarried women with sexual health and reproductive services — and changing the views of India’s gynecologists.

In February 2020, I met with Sreejani Malakar, the Health Over Stigma campaign manager, who explained:

If you are sexually active, the precondition is that you are married. If you are not married, and having sexual relationships, you are considered impure and the doctor will not treat you. It is a social stigma; doctors and medical professionals are products of the social system. And the level of shame involved is so great that women often cannot bring themselves to seek the services they need.

Traditionally, in Hinduism, sex before marriage is seen as a source of pollution, and stigmatized outside of marriage; in Islam, it is forbidden. These attitudes among doctors, Malakar says, lead unmarried women to de-prioritize their sexual health needs and refrain from accessing the appropriate services.

In a survey of unmarried women living in Delhi, conducted throughout 2018, Haiyya found only 5 percent of respondents took their information about sex or contraception from medical professionals. Most, they found, relied on the internet or friends.

Other statistics reveal the consequence of this vacuum. The same survey discovered that only 20 percent of the women surveyed understood their rights relating to abortion. Meanwhile, a 2018 YouGov India survey revealed that 15 percent of women thought that emergency contraception was not suitable as a regular method of contraception; 49 percent were not sure.

‘The man at the pharmacy pretends to mishear me’

Sapna Devi (not her real name), a young, unmarried woman, shared her experience with me last February in an interview in her home city of Jaipur. “I was 18 when I met my last boyfriend on Facebook. We dated for two years, and would meet in hotels, where no-one could see us,” she recounted.

Sapna described how the first gynecologist refused to treat her as an unmarried woman. She tried again, this time pretending to be engaged, and managed to receive the contraceptive injection. She bled irregularly in the following months, but felt she couldn’t go back to the doctor. In the end, she resorted back to condoms and emergency contraception.

At 1.50 USD per dose, the emergency contraceptive pill is by far one of the most accessible options of contraception for women in India, with one pre-pandemic survey finding 77 percent of single women use it as a regular means of contraception, despite the uncertainties over the side-effects of long-term usage.

“The man at the pharmacy always pretends to mishear me, making me ask twice. But I don’t care; it is the easiest option,” said Devi.

It was stories like Devi's that pushed Haiyya to start the Heath over Stigma campaign back in 2017.

At that time, Haiyya ran a set of meet-ups called the “Vagina Dialogues”, where unmarried women were encouraged to talk about their sexual health experiences. The dialogues revealed the extent of the problem and Haiyya decided to scale up the movement by going to the streets and asking women to share their stories.

Haiyya has found, for example, that many doctors refuse to perform internal examinations on unmarried women; requests for safe contraception are rejected; and those needing abortions are referred to expensive, often illegal, clinics, despite terminations being legal in India up to 20 weeks, regardless of marital status.

Low public provision and failure to regulate private providers mean abortion charges, particularly for the unmarried, are beyond the spending power of most patients.

#MyGynaecStory, the campaign’s hashtag, features the testimonies highlighting some of the grave consequences — both physical and mental — of a healthcare system shaped by a highly sexually conservative society.

Going to the gynaec as an unmarried woman is already an v stressful experience. The taboo of premarital sex, fear of parents finding out.. all of this makes it very hard to prioritize our sexual health! Doctors should NOT be adding to this by dishing out judgment. #MyGynaecStory

Right to healthcare is a basic human right. It provides a social safety net to people across the socio-economic hierarchy. Consulting a gynecologist should be an affordable right accessible to those who are disadvantaged due to age and lack of finances.#MyGynaecStory

Armed with these testimonies, Haiyya’s next step was to take aim at doctors, realizing their support was needed to force change within the health care services.

Dr. Shehla Jamal, a doctor that attended one of Haiyya’s initial discussions between doctors and unmarried women, has been involved with the campaign now for over three years. She spoke to me by phone from Delhi:

Prior to this, I used to judge every unmarried girl I treated, and I am not even that old, I’m only in my early 30s. But that type of societal thinking, it is engrained. We tend to think in one way, whatever we have been taught, whatever we have been seeing around us. But until someone comes and makes us aware of the necessity of this issue, the issue is not going to be taken up, no one is going to give it even a second thought.

The campaign then devised a set of minimum standards for doctors when treating women for gynecological issues. These “10 commandments” include rules such as maintaining the confidentiality and treating female patients as independent entities, necessary as doctors often seek the permission of a husband before treatment.

In an important victory for the campaign, these standards were adopted by two medical councils in 2019, including the Delhi Medical Council, one of the largest medical associations in Delhi.

In the shadow of the coronavirus pandemic, accessing sexual health services has never been harder for unmarried women in India, and Health Over Stigma has moved online as it attempts to maximize its reach. Instagram is the main vehicle of communication where the campaign has been sharing contacts of amenable gynecologists, and arranging “access days,” when women can discuss sexual health concerns online with doctors.

The campaign is now in the process of building a network of unmarried women volunteers, known as “defenders,” and doctors willing to treat patients without judgement of their marital status, across the four cities of Delhi, Mumbai, Kolkata, and Guwahati. The groups are now meeting online, sharing stories and strategizing how to bring change. The movement is spreading, but as India’s social structures continue to develop, there is still a lot of ground to cover.

In Jaipur, the newly single Devi is pushing her chole bhature around her plate and chatting. “Everyone is having sex in India,” she says. “But it is in the shadows,” as she fires up Facebook to connect with others like her.