War may plummet the region into a disaster 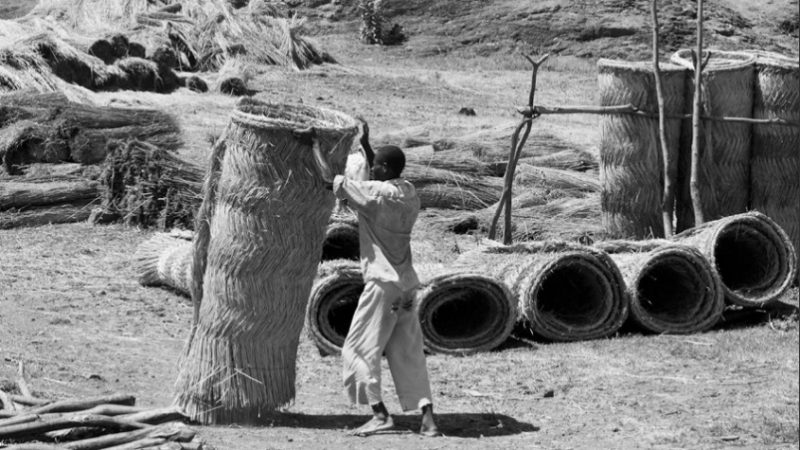 A man works in agriculture in al-Qadarif, Sudan, that state in which conflict at the Sudan-Ethiopia border has led to skirmishes for years. Photo by Bibi Eng, licensed under CC BY-NC-SA 4.0.

On January 14, at least five women were killed in the latest rash of border attacks. 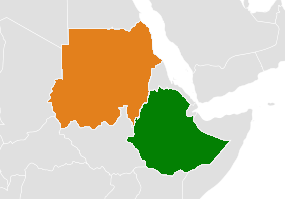 Map highlighting Ethiopia in green and Sudan in orange. Photo by PlanespotterA320 via Wikimedia Commons, CC0.

Al-Fashqa region is technically within Sudan’s borders, located within al-Qadarif state, but Ethiopians have settled in the same area for years, with longstanding flare ups between the two groups.

Tensions further escalated since November 2020, when 50,000 Ethiopian refugees fled to the Sudanese-Ethiopia border, after war broke out between the Ethiopian federal government and the regional Tigrayan People's Liberation Front (TPLF), in the northern Tigray region.

Sudan's Omar Qamar al-Din, acting minister of foreign affairs, defended Sudanese forces, stating that they are moving within Sudan’s border territories, adding that Sudan does not want war unless its borders are violated.

On December 15, Sudanese Armed Forces say they were ambushed by Ethiopian militia while combing Mount Abutiour area. The attack left at least four Sudanese soldiers dead and dozens of others, wounded.

Hamdok, the Sudanese Prime Minister tweeted his concerns over the situation:

Tweet 1: The Cabinet continued to follow carefully and with interest the events in the brotherly country of Ethiopia, which began nearly six weeks ago. Our country has received thousands of refugees fleeing across the eastern borders, and our people have increased their known generosity despite the economic and cruel conditions and limited capabilities. Tweet 2: Tuesday evening, while our forces were returning from combing the area around Jabal Abutiour inside our lands, they were ambushed by some Ethiopian forces and militias inside Sudanese territory, and as a result, losses of lives and equipment occurred. Tweet 3: The Council of Ministers affirms its support and stand with the armed forces that close the gaps and guard the country, and affirms its confidence in the ability of our armed forces to protect the country's borders and repel any aggression.

Throughout December 2020, the Sudanese army moved to extend its control over most of al-Fashqa and, after working to reach the last border point, managed to secure the whole area as of January 1.

A high-ranking Sudanese delegation had traveled to Ethiopia, on December 13, with plans for a two-day talk, but after a few hours, the same delegation returned to Khartoum, — opening the door to many questions.

The contested al-Fashqa region falls under Sudanese control, according to an Anglo-Ethiopia agreement signed in 1902, between Ethiopian Emperor Menelik II, and Britain on behalf of Sudan, when Sudan was still a British colony. This agreement defined the Sudanese borders with Ethiopia as follows:

The frontier between the Sudan and Ethiopia agreed on between the two governments shall be: the line which is marked in red on the map annexed to this Treaty in duplicate, and traced from Kher Um Hagar to Gallabat, to the Blue Nile, Baro, Pibor, and Akobo River to Melile, thence to the intersection of the 6th degree of north latitude with the 35th-degree longitude east of Greenwich.

A printed copy of the map, printed in 1909, in London, England, can be seen here.

Since 1902, clearly demarcated signs have prevented border disputes but due to natural erosion, those signs are no longer visible.

In 1996, Ethiopians occupied al-Fashqa, and year after year, they built farming settlements.

To this day, Ethiopian militia groups have allegedly killed Sudanese civilians during the harvest season to take their crops. Paved roads linking the settlements and the Ethiopian interior indicate possible investments supported by the Ethiopian government.

Former Deputy Prime Minister Demeke Mekonnen of Ethiopia has acknowledged that al-Fashqa is a Sudanese region, but what occurs on the ground contradicts these agreements and media narratives.

As the dispute between Egypt and Ethiopia mount over the Grand Ethiopian Renaissance Dam GERD, some have theorized that Sudan may be heading for a proxy war with Egypt through its conflict with Ethiopia.

The current Egyptian attempt of proxy war on Ethiopia through Sudanese invasion reminds us similar proxy war of 1974 by Saed Barre, of Somalia. Amazingly, TPLF has served as main agent for Egypt on both attempts of proxy wars.

Muhammad al-Faki Suleiman, a member of the Sudanese Sovereignty Council, said in a press conference the following Friday:

On January 16, Abdel Fattah al-Burhan, head of the Sudanese Sovereignty Council, said that they had agreed to deploy the Sudanese army to secure the international border with Ethiopia, as part of Prime Minister Abiy Ahmed’s military operation to disarm militant members of the Tigray People’s Liberation Front (TPLF).

He reasserted that the Sudanese army was only deployed within Sudan’s borders.

War is not a good choice for either country. Sudan claims it is simply moving inside its own boundaries. Ethiopia says alleged crimes against Sudanese farmers were committed by militia groups — not official forces.

War at this time may plummet the region into the disaster, especially since it could synchronize with another burgeoning conflict between Somalia and Kenya.