Football skills showcased in video to a virtual sports clinic 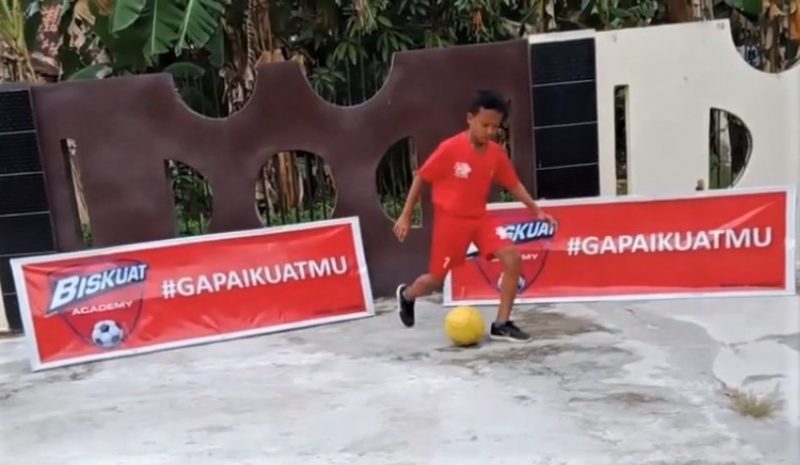 A sample of a video uploaded by participants in an online football coaching clinic. Source: Screenshot of YouTube video by papa na akha.

Around 1,900 Indonesian children participated in an online football clinic from October to December 2020 organized by Biscuit Mondelez Indonesia.

The Biskuat Academy Championship, an annual football competition for children held in eight Indonesian cities, became a virtual coaching clinic in 2020 since the pandemic made face-to-face matches difficult to organize.

The organizers explained why they decided to hold the “Online Football School” despite the challenges posed by the pandemic:

We hope to provide easy access for all Indonesian children to continue to develop their potential during difficult times like today.

They added that through the coaching clinic, children have the opportunity to be trained like professional footballers because the curriculum is designed according to the standards set by the Union of European Football Associations.

Football is among the most popular sports in Indonesia.

Ten football class schedules were made available for interested children. Students were then invited to upload videos of football skills or techniques they have learned during the class.

Participants received training from professional players and mentorship from Indonesia's top football teams. Finalists who submitted the best 20 videos will get football school scholarship packages and achievement path certificates from the Indonesian Ministry of Youth and Sports.

One of the participants was Ghazy Adindra Kaysan, who went on to become the second-place winner of the 2020 Biskuat Academy Grand Final Online Championship.

A 60-second video shows him wearing a red jersey with black accents on the waist, number 10 on the chest of his shirt, yellow shoes, and black socks. The grand final event's presenter gave accolades to Ghazy's speed and skill and give him the nickname Ghazy ‘Salossa’, which refers to PSSI (Football Association of Indonesia) legend Boas Salossa.

Afandi Mansyur, Ghazy's father, couldn't help but express admiration for what his son achieved during the virtual football competition:

Unexpectedly, Ghazy Adindra Kaysan was able to win second place in the Biskuat Online Championship 2020 Grand Final with a score of 90. His value is only 0.5 from the first rank, who is three years older and had the record as the best player in Yogyakarta.

While waiting for his turn to compete in the football competition's grand finals, Ghazy still took the time to read books on the field under the afternoon heat. He never gave up on his dream while continuing to study hard.

His inspiring story and success affirmed the value of pursuing initiatives that seek to develop the potential of individuals even during a pandemic. 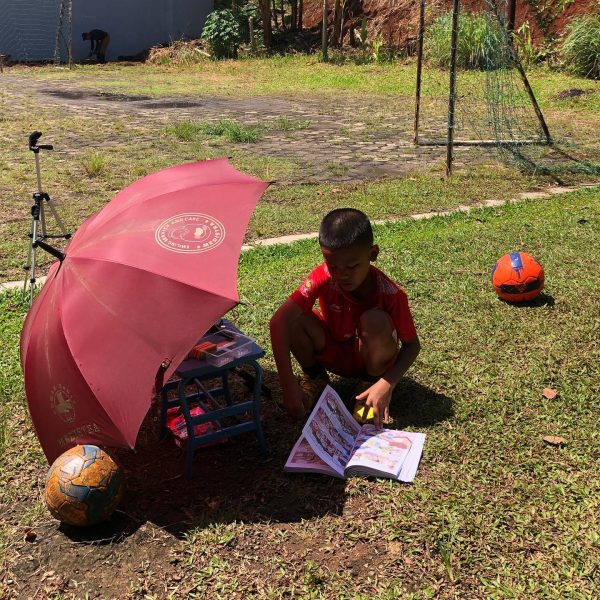 Ghazy reading a book on the side of a football field. Photo from Afandi Mansyur, used with permission