A Russian-Canadian visual dictionary celebrates the richness of Russian profanity. 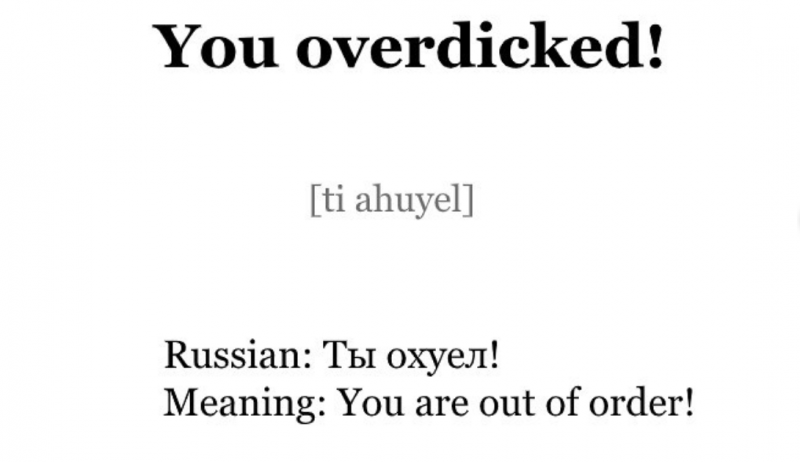 Attempting to curse in a language you don't speak natively can be a tricky proposition, but for those who want to take the risk, there's now an Instagram account teaching English-speakers how to swear in Russian.

curselikearussian has taken on the mission of coaching users in the use of “мат,” as the rich reservoir of profanity is called in Russian and other Slavic languages. The term “мат” is derived from the classic Russian expression “Ёб твою мать”, which means “f*** your mother.”

While widely used in everyday life, мат was denied during the Soviet period, then recognized again after the fall of the Soviet Union in 1991. It has been widely studied by academics and lexicographers. In Russia, the use of мат was banned in public spaces in 2014 under article 20.1.1 of the Code on Administrative Offenses, which labels it a form of hooliganism and imposes fines or administrative arrest on offenders. This largely means that instances of мат are censored in films, on television and radio, and in public discussions or speeches.

None of this has stopped profanity from thriving in Russia and in other multilingual contexts: Kyrgyz speakers, for instance, drop Russian-language мат into Kyrgyz-language conversations for effect.

In an interview with Global Voices, the creators of curselikearussian, Russian journalist Elmira Kuznetsova and Canadian comics and animation artist Jess Pollard, said their aim is to honor the richness and creativity of Russian profanity—and also to highlight its complexity.  Kuznetsova explained how it all started:

Jess is learning Russian and one night I was trying to translate to her the Russian curse “На хую я вертел.” The phrase translates as “I don't care” but the literal meaning is “I spun it on my dick”. Just for laughs, Jess drew a sketch depicting random things being spun on male genitalia. We laughed so hard both at the image and at the absurdity of the literal translation, we decided to make more illustrations. This turned into a comic magazine that we called “An Illustrated Treasury of Russian Curses” that was printed in a batch of 50 copies and sold to our friends.

They created the Instagram account in October 2020 to promote the zine. Then, encouraged by friends and colleagues, they started adding to the collection. The account has now over 50,000 followers.

My Russian teacher explained that “Я скучаю по тебе” does mean I miss you, but it is also connected to the word “bored”: in a way, we are almost saying “I have lost my zest for life without you.” While learning Russian has resulted in many laughs, I also find it an extremely beautiful and complex language.

For Kuznetsova, the best Russian expletive is “сказочный долбоёб”, which she translates as “a fabulous whack-fucker.” She also cherishes the term because it has been the subject of several ridiculous court cases in Russia.

Asked how they deal with the challenge of translating highly idiomatic expressions, Kuznetsova and Pollard said that:

We go with the most literal, word-by-word translation of the curse. So there's no need to borrow. The process is usually pretty quick, although there are cases when even basic words or grammatical constructions in Russian require some adaptation to retain their meaning in English. Once we were stuck for an hour working on the phrase “Хуем груши околачивать”. We couldn't decide whether it was “to knock off” or “to knock from” that preserved the meaning of the verb better. The consensus was reached only after a Canadian friend with a Master's degree in English was invited to join this most heated discussion.

Translations, Pollard noted, can combine both linguistic and visual aspects:

There are so many aspects to consider when translating: flow, comedy, meaning, and the emotional aspect. The illustrations are themselves a kind of translation that supports the phrase. Should this character look happy? Angry? Amazed? A further layer is added when we connect the two languages together: sometimes curse translations can be “supported” by existing English phrases, as in the case of “whackerfucker” (which mirrors the construction of “motherfucker.” This is why we chose to not add a dash between “whacker” and “fucker.”) While this makes the translation both accurate and easily understandable to English speakers, some of our Russian fans were convinced “whackerfucker” is a real English word. Perhaps, the translation was too good… This is the most swearing I've ever done in an interview. My hands are shaking!