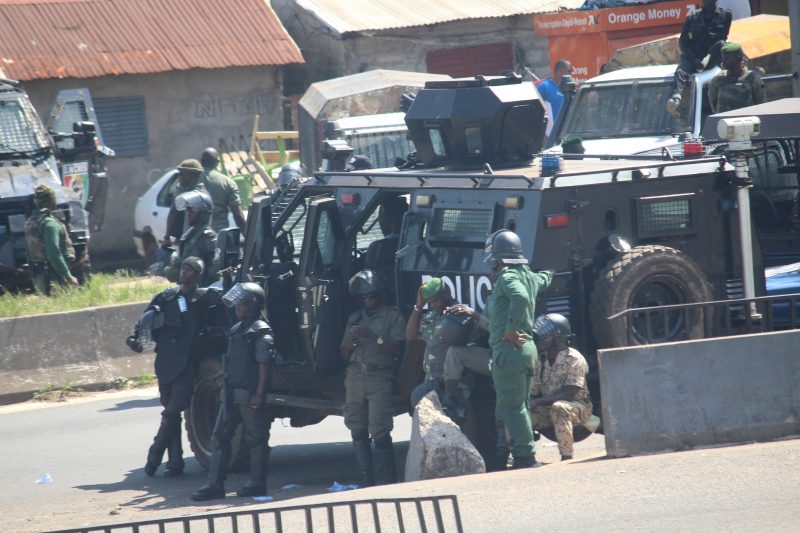 Security forces during a demonstration by the Guinean opposition Front for the Defence of the Constitution. Image by Aboubacarkhoraa, taken from Wikimedia, used under the licence CC BY-SA 4.0

On December 15, 2020, Guinean President Alpha Condé was sworn in for a third term following his victory in the presidential elections held on October 18. The third term was permitted following a referendum held on March 22, 2020, at the same time as legislative elections.

In power since 2010, Alpha Condé should have left the presidency in 2020, in accordance with the Guinean constitution, which allows only two consecutive terms of five years. However, even in autumn 2019, he indicated that he would seek to amend the constitution for a third term through a referendum.

Since 2019, he has effectively worked toward this by manipulating the political system, not hesitating to falsify the electoral process. These significant irregularities have been denounced by international organizations and Guinean civil society, but to no effect, as he has once again managed to get reelected.

During the 2018 legislative elections the International Francophone Organisation (OIF) sent two teams to Guinea to assist the electoral process. It noted serious irregularities and withdrew from the monitoring process. In a communique dated February 24, 2020, the OIF noted that, despite the observations of an audit from 2018, the electoral register still contained “2,490,664 problematic voters,” who had not renewed their registration in 2019 with the Administrative Commissions for the Establishment and Revision of Electoral Lists (CAERLE) but were still on the electoral register:

The shortcomings identified in these lists include a number of cases of undeclared, deceased voters as well as duplicate voters. In total, it was found that 98 percent of these 2,490,664 voters do not have documents that allow them to be identified, despite the fact that the law provides for six types of documents to prove a voter's identity and age.

The OIF is not the only organization to have observed irregularities: the Economic Community of West African States (ECOWAS), which is known for being sympathetic to those in power, also withdrew from the Guinean electoral process, followed by the African Union.

The March 2020 referendum was also rejected in Guinea by part of the Independent National Electoral Commission (CENI), highlighting the inadequacies of the electoral register.

As two journalists from guineematin.com explained, in all the regions favorable to the ruling party, the Rally of the People of Guinea (RPG) Rainbow, the number of registered voters on the electoral register showed serious anomalies:

Those who created this register allowed the electoral population of Kankan alone [the country's second largest city] to see an increase of more than 54 percent between 2015 and 2019. There has been a similar rise of 30 percent on average across the country.

Worse, some towns in the country have seen their electoral population double in four (4) years…

Alpha Condé: Stay in power at all costs

Under pressure from street protests, Condé agreed to ask the CENI to review the electoral register before the referendum, while refusing to accede to the request from his ECOWAS colleagues not to run for a third term.

The total number of registered voters was thereby reduced from 7,764,130 to 5,325,137. After this reduction, the African Union and ECOWAS eventually resumed electoral assistance to Guinea at the end of February, considering these corrections to the electoral register satisfactory.

However, in Guinean opposition and civil society, grouped together in the Front for the Defense of the Constitution (FNDC), refused to participate in the referendum and held numerous demonstrations. The government responded with violence and unleashed its security forces. On October 12, the FNDC reported that in a year, the number of victims rose to 90.

Amnesty International (AI) reported earlier this year that, between October 2019 and February 2020, “at least 10 demonstrations were banned by authorities in violation of the right to freedom of peaceful assembly. About 40 people were subjected to secret detention at the Soronkoni military camp in the region of Kankan.”

In the capital, Conakry, security forces have attacked even funeral processions, according to AI:

The new constitution was approved by 91.59 percent of the 2,856,675 votes cast, of an electorate of 5,325,137 recognized by the CENI, in the referendum on March 22. During this vote, the opposition as a whole called on its supporters to do everything possible to prevent it from taking place, noting other irregularities such as the modification of the text which had been approved.

The presidential elections finally took place on October 18, 2020, with 12 total candidates, including several former ministers from the outgoing president's government.

The two main candidates were President Alpha Condé and Cellou Dalein Diallo, opposition leader, the Union of Democratic Forces of Guinea (UFDG) leader, and a member of the Fulani ethnic group, who are mostly in the north of the country, and account for a third of the population.

Condé did not hesitate to use references to Diallo's ethnicity in attempts to undermine him. In the Kankan region, Condé's supporters prevented Diallo from conducting his campaign. They ransacked shops belonging to Fulani people living in the town and killed cattle belonging to Fulani herders in the Koumban area.

In the end, Condé won the election and obtained his third term in office with, according to official results, a little under 60 percent of the votes, against 33 percent for Diallo. Since election, security forces have occupied the UFDG offices without any legal consequence.

El Hadj Baldé, nicknamed “lawless,” is president of the National Coordination of the Fulbe and Haali Pular of Guinea (CNFHPG), relating to Fulani people and Fulani language speakers. An article by VisionGuinee.info reported that the abuses continue, according to him:

During his speech, Condé asked his fellow citizens to “forget the past” and turn toward a “future of unity and hope.” But now, this seems difficult: Opponents are still in prison and one of Diallo's colleagues has reportedly died, as UFDG member Souleymane Souza Konaté said:

Detained in the notorious prison of the current regime, the activist and political prisoner Roger Bamba is dead.
We call on the world to hold Guinea's leaders responsible for the killing of political prisoners.
Rest in peace dear uncle!