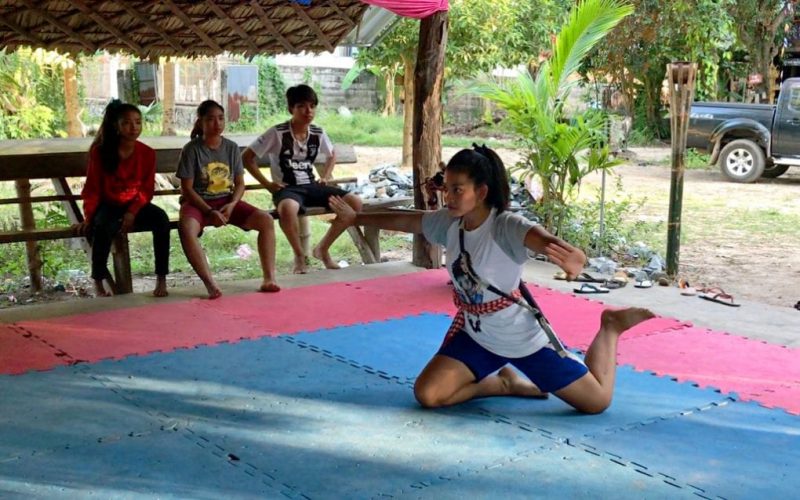 This edited article [1] by Ouch Sony and Danielle Keeton-Olsen is from VOD News, an independent news site in Cambodia, and is republished on Global Voices as part of a content-sharing agreement.

After surviving the Khmer Rouge regime by literally burying the tools of his trade underground, Om Yom, one among a few remaining old masters of the Cambodian martial art l’bokator [2], spends his time teaching the younger generation. He dreams of developing the sport to the level of other countries’ martial arts practices.

After facing near-extinction during the Khmer Rouge era, l’bokator is slowly regaining its popularity in Cambodia — in no small part to the passion and perseverance of 67-year-old Yom and his fellow practitioners.

L’bokator — also written as bokator — is the oldest martial art still practiced in Cambodia, and is an important part of Kampong Chhnang province's cultural history. The ancient martial art combines techniques like throwing elbows, knees and punches as well as using weaponry. It was used for combat in past wars, in addition to being a source of entertainment and a spiritual practice.

The presence of l’bokator in Cambodia dwindled as the country weathered periods of war and social upheaval. Under the Khmer Rouge regime, when artists and athletes were targeted and killed because they were considered to be part of the country’s urban elite, l’bokator almost disappeared.

Nowadays, students demonstrate their skills at a l’bokator club in Kampong Chhnang’s provincial capital, chanting and calling out at Yom's instruction. In an exhibition sparring match, a teenage girl takes on two male peers, emulating the moves that masters would have used in fatal fights in the past. Starting with combat poles, the girl disarms her peers by sideswiping with her pole, dodging and making fast grabs, and when the boys finally take her pole, they switch to barehanded jabs and high kicks.

Originally from Kampong Chhnang province, Yom has spent the past 10 years training young fighters in the hope that l’bokator will be recognized [3] as an intangible cultural heritage by UNESCO, a long-sought recognition of the sport’s foundational role in Southeast Asian martial arts.

He says he has been training students for free since 1993, starting by teaching peers in his community before quitting his job casting molds for pagoda statues and other structures to open a club in Kampong Chhnang city in 2004. The club was formally registered in 2011.

Beyond training students, Yom says he’s worked with other l’bokator advocates, collecting information from masters and sharing what he can with Phnom Penh and international stakeholders interested in preserving the martial art.

We have struggled these last 10 years to tell [everyone] that this is ours. We need to write down [the techniques]. We need to gather and not use only what belongs to me, because we have plenty [of information out there]. 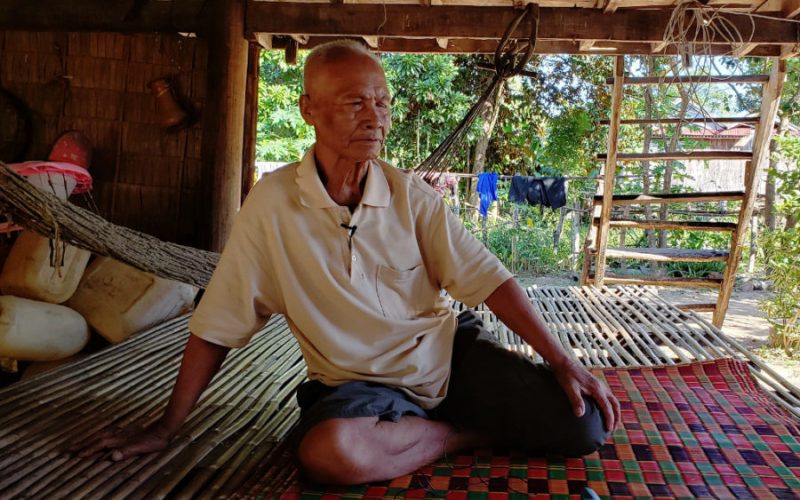 The ancient city of Longvek, now in Kampong Chhnang province’s Kampong Tralach district, was known historically as a gathering point for scholars, martial arts experts and other knowledgeable people, and it served as the heart of the country’s military from the end of the Angkorian era to the present.

Yom, a Kampong Chhnang native, says his grandfather passed on l’bokator to his father, bestowing a golden badge tied to a rope as a symbol of mastery. Because l’bokator was so important to his forefathers, Yom says he feels called to revive and preserve the tradition.

I have a family line of martial arts trainers in my father and my grandfather, so I think we should do everything (to conserve and develop the sport).

A few kilometers from the provincial town, another master, 80-year-old Ke Som On, says he finally retired from practicing l’bokator this year, as he’s had some trouble with his lungs.

He had only started about five years ago to retrain the skills that had been embedded in his mind since he was 8-years-old.

Like his younger peer, Som On’s family passed down the martial art. He was taught by an older uncle who was a member of the Khmer Issarak movement that fought for independence from the French colonial regime.

Som On did not want to train his children or other students in the martial art. But in the past five years he became involved in l’bokator again after Yom, a neighbor, urged him to share his skills.

Vath Chamroeun, secretary-general of the Olympic Committee of Cambodia, says the nation’s sports agency has worked with other older masters for years to find other remaining masters and compile their knowledge into martial arts books.

When Som On first began training decades ago, the granddaughter of a master would watch and sometimes participate in l’bokator training sessions.

Now 80-years-old, Sao Von still recalls how she would watch her grandfather practice l’bokator and try to emulate the moves behind her house. When she turned 15, her grandfather invited her to study alongside the men, though many in the village would criticize her for training, she says.

Von says she can no longer wield a baton or strike as she used to. She says her memory is fading as well, and her thoughts drift during the interview. 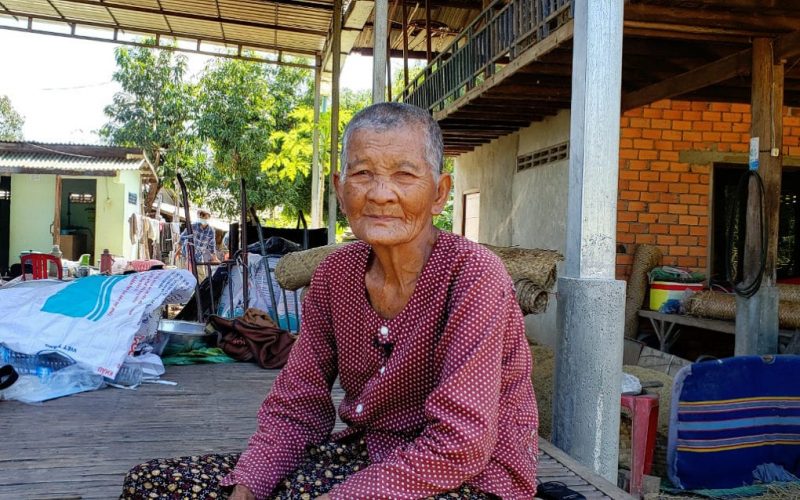 Chamroeun says that as they’re collecting knowledge of the older traditions, the committee is also modernizing the sport — creating a management structure, starting yearly competitions, and setting up proper training regimes that follow official rules. And since 2015, select techniques including weapons tactics have been incorporated [4] into Cambodia’s military training programs.

The sport is now recognized by the World Martial Arts Association and will be included in the 2023 Southeast Asia Games, but UNESCO intangible heritage status still eludes the sport.

As his students improve Yom says he’s eager to promote their abilities and bring them to competitions and festivals. He says he sacrifices a lot of his time and energy to grow both general interest in the sport and also Kampong Chhnang province’s unique affinity for l’bokator.

Tho Srey Nich, 17, is a student at Yom’s club who says she has trained in l’bokator for four years, though her parents were initially hesitant about her interest in the sport.

When she began practicing l’bokator, her family, friends and neighbors saw it as a man’s sport and discouraged her from training.

Whenever they talk [about me], I don’t care, because the important thing is that I love things that are left behind by our ancestors.

Yong Tak, 21, has trained for 10 years and has become one of the top fighters at the Kampong Chhnang club. His parents also did not want him to pursue l’bokator at first, despite both his father and mother having trained in the martial art when they were young.

In the pupils’ final demonstration, Yom watches as Tak performs a backflip while holding knives in both hands. It was not a move the old master taught him.

“I can’t move like him,” Yom says, taking his pupil’s creativity as a sign of the sport's evolution. 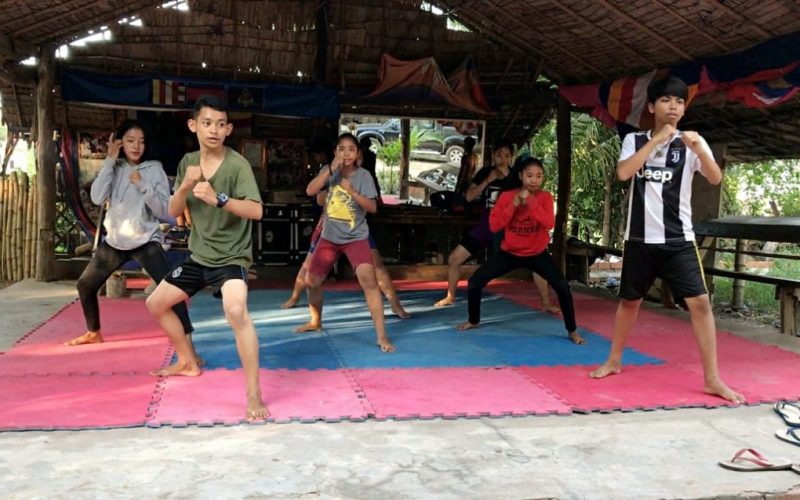