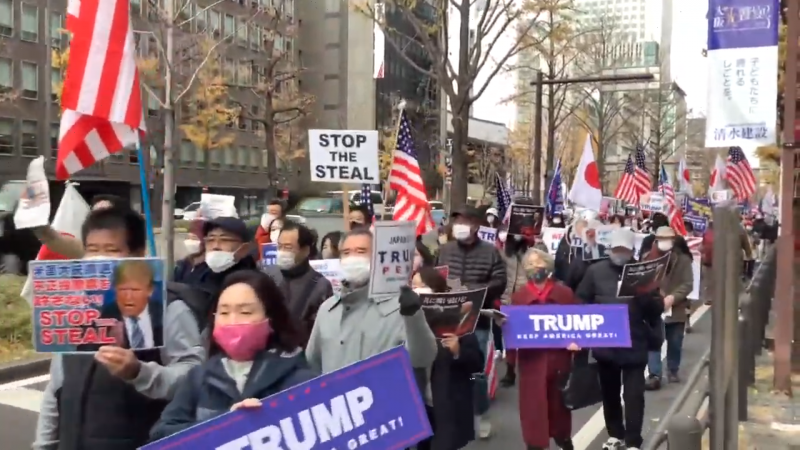 Highly-organized pro-Trump demonstrations have been taking place in some of Japan's largest cities as a part of a thriving “J-Anon” (QAnon in Japan) movement.

In a series of tweets, Jeffrey Hall, a scholar specializing in right-wing politics who teaches at Waseda University, documented a relatively large pro-Trump “stop the steal” rally on January 6 in Tokyo, hours before Trump supporters on the other side of the planet violently stormed the U.S. Capitol building in Washington D.C.

A pro-Trump #StopTheSteal march is being held right now in Tokyo. Hours before the #January6th march takes place in America, these people are holding their own event supporting the claim that Trump actually won the 2020 election. pic.twitter.com/6CNobnlzHk

And in mid-December, BBC journalist Shayan Sardarizadeh, who reports on conspiracy theories, shared videos of another pro-Trump demonstration in Osaka, noting the growth in Japan of the QAnon phenomenon (a “crowdsourced” conspiracy theory where Donald Trump is battling dark forces, including a paedophile ring).

QAnon seems to be growing bigger and bigger in Japan.

There was a pro-Trump “Stop the Steal” rally in Osaka today and some members of team “QArmyJapanFlynn” were there. pic.twitter.com/EyDDGx7eKb

Until a social media crackdown following the January 6 riot at the U.S. Capitol, QAnon groups in Japan have connected using hashtags such  #J-Anon (#Jアノン) and #QArmyJapanFlynn, in reference to disgraced U.S. National Security Advisor, and key QAnon figure, Michael Flynn.

Despite the platform's multiple crackdowns on QAnon since 2020 — including its most recent one in which it removed over 70,000 related accounts — as of January 13, 2020, both hashtags remain active.

As for why QAnon has become popular in Japan, as expemplified by rallies in various cities since the November 2020 U.S. election, it's thought that the social dislocation caused by the massive earthquake, tsunami and nuclear disaster in 2011 and now the COVID-19 pandemic have made some in Japan more receptive to conspiracy theories that help explain where everything went wrong.

In an article published in December 2020 by Harbour Business Online, journalist and activist Ogesa Taro notes that support for Trump in Japan comes from an established, symbiotic ecosystem of far-right, ultranationalist and anti-communist groups with a prominent social media presence.

Ogesa also says support for Trump can come from across the political spectrum in Japan: Anti-base activists in Okinawa, for example, may have initially supported the current U.S. president in the belief he would pull American forces out of the country.

Those who support human rights in China, Ogesa says, such as democracy in Hong Kong, or an end to the persecution of China's Uighur minority, may also look on Trump as a savior.

He adds that support for Trump also comes from cults and fringe religious movements. Such “new religions” (新興宗教), which are sometimes referred to as cults, have a rich history and continuing presence in Japan, and date back to the social upheaval and loosened restrictions on religious activity following the cataclysmic end of the Shogunate in 1867.

The devastation of war, and subsequent expansion of personal liberties following Japan's defeat in the Second World War sparked the growth and renewal of a variety of new religious movements.

The most infamous of these postwar fringe religions was the Aum “doomsday cult” of the 1990s. Led by Asahara Shoko, the Aum group engaged in a series of targeted murders, bombings and other activities before releasing sarin gas in the Tokyo subway system in March 1995, killing 13 people and injuring at least 5,500 others.

Sarah Hightower, an independent researcher who studies domestic terror movements notes that Aum, like QAnon, was quite successful with its recruitment efforts:

aum recruited an astrophysicist who monitored the radioactive output of neutron stars for fun and within a year he was willing to kill babies because he believed anime and asimov were real and [they] wanted to kill asahara.

he gave the orders to make sarin ffs.

It has been estimated that by 1995 there were 65,000 Aum members in Japan and around the world, with 30,000 to 50,000 members located in Russia. Prior to the attacks, Aum engaged in various commercial operations in Japan, and sold drugs and weapons in countries around the world.

Are cults in Japan embracing J-Anon?

Waseda University's Jeffrey Hall, who filmed the large, well-organized pro-Trump marches in Tokyo on January 6, also identified the participation of fringe religious groups, including Sanctuary Church (also known as World Peace and Unification Sanctuary), Falun Gong and Happy Science (幸福の科学), the latter a religious organization, often referred to as a cult, with its own political party in Japan.

Falun Gong, an international religious movement that is banned and persecuted in Mainland China, operates Epoch Times, an anti-communist and increasingly pro-Trump newspaper. Falun Gong has participated in or helped organized other pro-Trump rallies around the world, including Taiwan.

Who are they? Trump supporters affiliated with several religious groups: Happy Science, the Sanctuary Church, and Falun Gong – appear were sharing information about this event in Japanese. Although it's a weekday, the turnout is quite large pic.twitter.com/OB5Llo08Vs

Fujikura Yoshiro, a researcher who covers fringe religious groups in Japan on his blog Almost Daily Cult News, noted on Twitter that he observed many prominent and senior members of Happy Science at a different pro-Trump demonstration in Tokyo's Hibiya district on January 5, which he estimated attracted between 1,000 to 2,000 people:

A demonstration in support of President Donald Trump marched from Hibiya to Ginza yesterday. It was sponsored by Happy Science's “Trump Supporters in Japan” group, along with the same Happy Science “Change Japan” group. The march also seemed to be co-sponsored by the New Federal State of China [a group linked to Trump supporter Steve Bannon] and by the “President Trump Re-election Support Rally / Demonstration Executive Committee“.

Fujikura notes it seems as though different groups were collaborating together as a sort of “J-Anon All-Star” team, all brought together by Trump.

And as part of a conversation on Twitter started by scholar and religions specialist Levi McLaughlin about what groups are driving the pro-Trump movement in Japan, Norichika Horie, also suggests pro-Trump groups include a variety of religious groups.

It is possible that such groups may be using the enthusiasm and energy generated by the outgoing U.S. president to attract new followers and generate revenue. 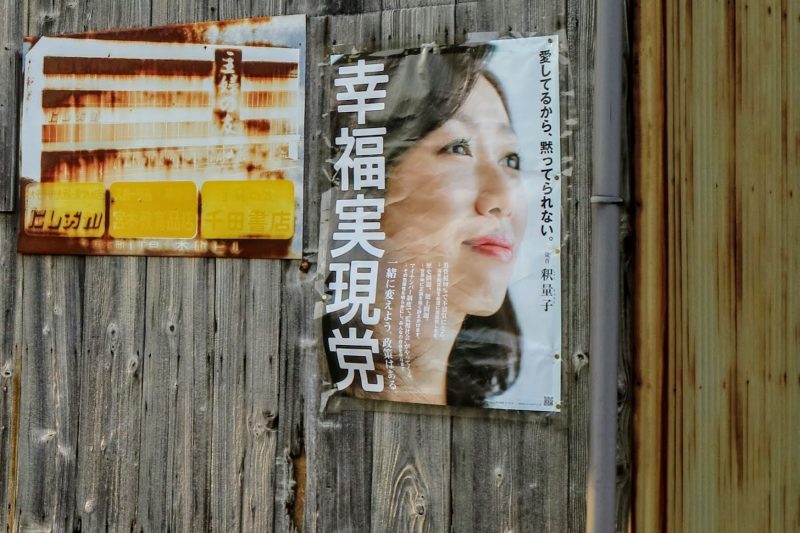 Thoton Akimoto, a software developer and journalist who regularly reports on and shares news stories on Twitter, worries that not enough people remember how quickly far-right movements can turn into cults, and the damage cults can do.

These pro-Trump groups in Japan, Thoton says, must be watched:

There is a saying, “The cult comes for you just when you have stopped paying attention.” No, there's no such saying, I just made that up right now. But it's true. We have to keep a close watch on the behavior of Trump supporters in Japan and the United States who deny the U.S. election results.