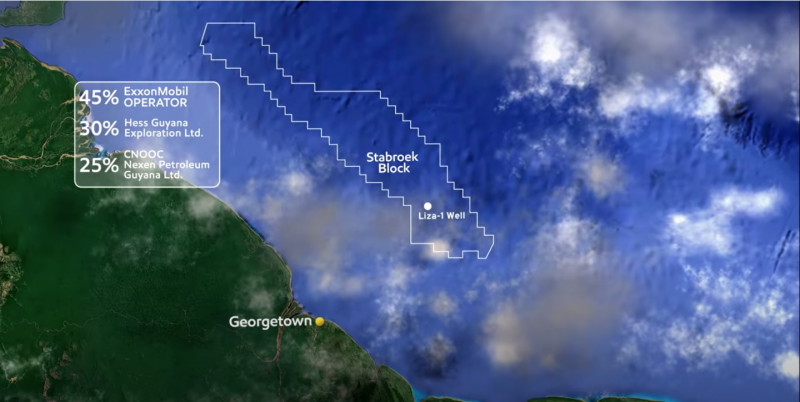 Screenshot of the Liza oil field in ExxonMobil's majority-owned Stabroek Block taken from the Hess Corporation's animated overview video of offshore Guyana, posted in 2017 to its YouTube channel. The field forms part of the disputed border area between Venezuela and Guyana.

Political tensions between Guyana and Venezuela are escalating in a longstanding border dispute over an area that comprises two-thirds of the smaller English-speaking South American country. The area in question is the resource-rich Essequibo province, where energy giant ExxonMobil began oil exploration in 2008. The company recently discovered significant oil and gas reserves in Guyana, placing the country on the threshold of an economic boon.

On January 9, Venezuelan president Nicolás Maduro announced that he would “reconquer” the province, which is situated to the west of Guyana's Essequibo River. While the area's riches include gold, diamonds and timber, the focus of Venezuela's claim is offshore—the location of ExxonMobil's massive Liza oil field, which the company estimates will produce approximately 120,000 barrels of oil per day. In its project overview, ExxonMobil describes the area as part of the Stabroek Block, calling it “the first significant oil find offshore Guyana.”

The discovery of Guyana's oil and gas resources has made the country the newest kid on the block in the global energy industry, whereas Venezuela is a well-established player. Despite the fact that Venezuela enjoys the largest oil reserves in the world, with more than 300 billion barrels, the nation has been teetering on the brink of socio-economic collapse for the past several years. The crisis grew deeper in 2017, after the country's Supreme Court of Justice nullified its National Assembly.

In 2019, President Maduro ordered that charges of treason be slapped on opposition leader Juan Guaidó for allegedly agreeing to forego Venezuela's claim to the Essequibo province. The renewed push from Venezuela follows the inauguration, on January 5 this year, of a pro-Maduro National Assembly, the legitimacy of which is being questioned by the opposition.

I remind that sovereignty over this coast, and the land territory to which it is attached, were awarded to Guyana (then British Guiana) in the 1899 Arbitral Award, whose validity and legally binding character Guyana is confident the International Court of Justice (ICJ) will uphold unequivocally.

On the heels of joint United States/Guyana coast guard exercises on January 8, Admiral Craig Faller, Commander of the US Southern Command, arrived in Guyana on January 11 for a three-day visit—a signal that the outgoing Trump administration's interest is firmly aligned with Guyana's.

Venezuela, once an important partner, has had a combative relationship with the United States since the 1998 election of socialist President Hugo Chávez. In 2018, Venezuela's foreign ministry said that US involvement in the dispute was tantamount to “interference.”

The United States ambassador to Guyana, Sarah-Ann Lynch, has advocated for a legal, peaceful resolution to the controversy:

The United States has long called for a legal peaceful resolution to Guyana’s border controversy with Venezuela and we reiterate that call today. https://t.co/rxgJEVfrtw

The matter was brought before the International Court of Justice, the main judicial arm of the United Nations, in June 2020. Venezuela has consistently refused to take part in the ICJ proceedings, preferring the path of bilateral discussions.

Minister Jorge Rodriguez, who has replaced Guaidó in Venezuela's parliament, has reportedly accused the opposition of colluding with the ICJ to rule in favour of Guyana in the boundary dispute.

Even though ExxonMobil has been attempting to carry on work as normal, there have been incidents in which naval ships from Venezuela have intercepted their vessels and turned them away from the area, claiming that it was not within Guyana's jurisdiction.

The Caribbean Community (CARICOM) has, in the past, stated its commitment to “assisting Venezuela and Guyana in this dispute,” making it clear that it would prefer a “peaceful solution” to the impasse. New CARICOM chair, Trinidad and Tobago's Prime Minister Keith Rowley, will preside over a virtual meeting of member states on January 12, but it is unclear whether the territorial dispute will be on the agenda.