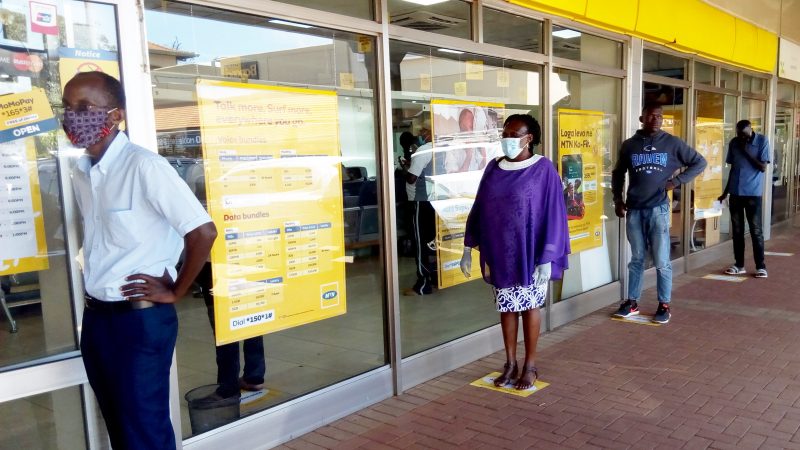 Last year in March, the Ugandan government joined the world’s fight against COVID-19 with strict measures and restrictions to control its spread throughout the country.

As citizens turned to the internet as a lifeline to access critical news about coronavirus regulations, exchange opinions, and share local information, the government activated several different cyber laws to criminalize the sharing of “fake information,” including the Computer Misuse Act (2011) [3], which regulates the flow and exchange of information in digital spaces.

In a country where authorities already crackdown on media, dissenting voices, and government critics, this increased criminalization of mis- and disinformation during the pandemic infringed on citizens’ rights to freedom of expression and access to information.

In the days leading up to the presidential elections on January 14, 2021, the government has also used COVID-19 restrictions as an excuse to target opposition politicians [4] by limiting crowds and rallies on the campaign trail. Two days before the election, the government reportedly directed internet service providers to shut down all social media [5].

Early on in the pandemic, on March 22, 2020, the Ugandan Communications Commission issued a press advisory statement [6] regarding the circulation of “fake information,” aimed at criminalizing misinformation.

In the same month, UCC also wrote [9] to three media houses, including BBS, NTV Uganda, and Spark TV, accusing them of airing content that might ‘“confuse, divert and mislead unsuspecting members of the public against complying with the guidelines issued by the relevant government authorities on the coronavirus.”’

Complicating matters, the definitions and applications of these laws are vague and broad [10], allowing for the state to use them to advance their own interests.

Citizens who critiqued the government’s COVID-19 response or shared concerns and grievances through social media faced increased arrests [11] and intimidation. Journalists, human rights defenders and bloggers were especially targeted for sharing “unverified information” about the virus.

A 2020 report on the state of internet freedom in Africa [12] during the pandemic highlights some of these cases:

Adam Obec, a former employee [13] of Kampala Capital City Authority (KCCA), was arrested on April 13, 2020, for spreading false information about COVID-19. Obec had distributed and circulated information on social media with the claim that Uganda had recorded its first COVID-19 death in Koboko district. The claim allegedly triggered fear and panic in the community and also undermined the government's effort to fight the virus.

In the same month, writer and human rights activist Kakwenza Rukirabashaija [14] was arrested allegedly for his April 6, 2020 Facebook post [15] in which he criticized President Yoweri Museveni’s strict COVID-19 restrictions. In the post, he wrote:

Museveni, be serious otherwise you won't love the comeuppance of your warped directives. If the country plunges into the…

Rukirabashaija was charged with “committing an act that could spread the virus,” according to a Freedom House 2020 [13] country report. His post allegedly violated Section 171 [18] of the Penal Code Act, Cap 120. On May 6, Rukirabashaija was released on bail worth 10 million Uganda shillings equivalent to $2,700 United States dollars (USD).

In a December 11, 2020, interview on WhatsApp, Rukirabashaija told Global Voices that he suspects his arrest on COVID-19 charges was actually related to his book, “The Greedy Barbarian [19],” a fictional work that explores high-level corruption.

Samson Kasumba, a TV news anchor [20] at NBS TV, was arrested on April 20, 2020, with no formal charges and later released. Authorities did not release details on Kasumba’s arrest, but his work as a journalist, which involved other “allegedly subversive [13] activities,” was said to be a reason, according to Freedom House. Concerns arose that Kasumba’s Facebook posts about COVID-19 written just days before his arrest may have been a factor. However, during a WhatsApp interview on January 7, Kasumba told Global Voices that he was sure his arrest was not related to any Facebook post.

‘Politics over everything else’

Anthony Masake, a program officer at Chapter Four Uganda, a digital right organization, told Global Voices in a WhatsApp interview on December 14, 2020, that UCC’s actions have encouraged self-censorship among the population and that citizens must accept government-issued information as “gospel truth.” As a result, the public is hesitant to speak out and hold leaders accountable, said Masake.

The government prioritizes politics over everything else, according to Kiiza Eron, a human rights lawyer with Kiiza and Mugisha Advocates. In a December 11, 2020, WhatsApp interview with Global Voices, Eron said that the COVID-19 rules have become the “perfect instrument for criminalizing dissent” and that the government is displaying its intolerance to criticism and opposition by selectively applying the enforcement of criminal laws in the context of COVID-19. He noted that only members of the political opposition, media and civil society have been targeted:

Ruling party officials — who routinely break COVID-19 rules — do so with undisguised impunity.

While authorities cracked down on dissent in digital spaces, security agents also attacked [22] journalists and media outlets attempting to cover the COVID-19 story in any way, leading to censorship in pandemic coverage.

For example, on March 19, 2020, Julius Ocungi, the director of Uganda Radio Network, was “slapped, punched, and kicked” by security officers when he tried to take pictures of security personnel closing down a local bar in Kitgum district, northern Uganda, following a COVID-19 lockdown. Ocungi’s camera was confiscated, and afterward, he was forced to delete photos. He attempted to file a formal case [23] about the incident but was subsequently denied by multiple authorities.

Masake, with Chapter Four, cited the arrests of several other journalists such as Tom Gwebayanga [24], with New Vision, Alfred Nyakuni, and Daily Monitor's Felix Warom Okello, who were all targeted for covering their coronavirus coverage.

Ironically, political actors [26] are often significant producers and conduits of disinformation. Government authorities play a critical role in stemming disinformation at the source through counter-messaging and clear legislation. At a time when information on COVID-19 is still developing, public perceptions [27] of the virus can easily lead to misinformation.

Throughout the pandemic, online access to information has been vital to public health. Restricting the flow and access of COVID-19 information through existing cyber laws denies citizens the right to freely express and exchange ideas online.

As new COVID-19 information emerges, citizens must stay educated and informed about the virus — and also how to fact-check and discern fake or misleading news. Media professionals have a responsibility to highlight and report on digital rights violations as part of their efforts to combat the spread of COVID-19 in Uganda.

This article is part of a series of posts examining interference with digital rights under lockdowns and beyond during the COVID-19 pandemic in nine African countries: Uganda, Zimbabwe, Mozambique, Algeria, Nigeria, Namibia, Tunisia, Tanzania and Ethiopia. The project is funded by the Africa Digital Rights Fund of The Collaboration on International ICT Policy for East and Southern Africa [28] (CIPESA).