Christmas, a time to campaign to free political prisoners in Nicaragua 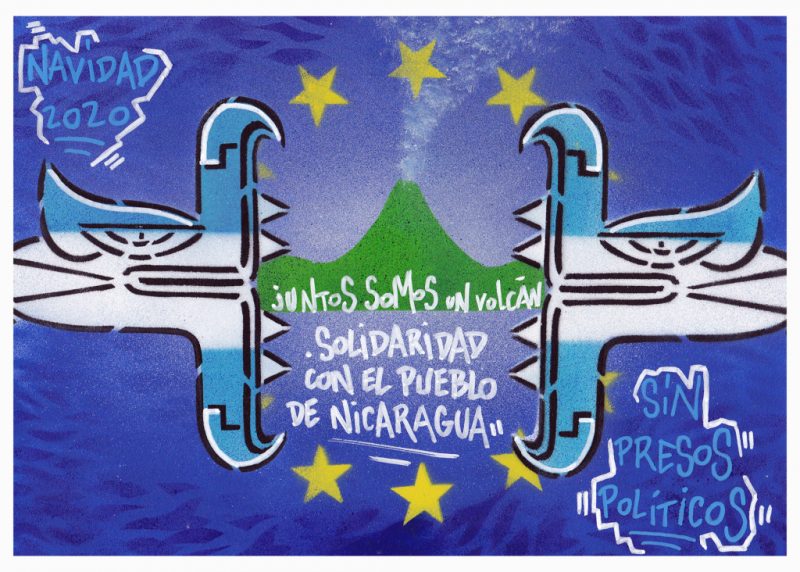 Postcard made by Europe-based campaign to release political prisoners in Nicaragua. Art by French urban artist Oré, used with permission.

The winter holidays are, for many, a season of rest—a time to celebrate with friends, family, and loved ones. But since mass protests swept Nicaragua in 2018, hundreds of Nicaraguan political prisoners have spent the holidays in prison.

As of December 2020, there were 109 political prisoners according to Havana Times, 108 according to the Europe-based organization Nicaragua Libre Sin Presxs Politicxs, and 118 according to La Prensa, a major independent news outlet in Nicaragua.

In 2018, the Union of Political Prisoners, a group of former political prisoners, launched the first “Navidad Sin Presxs Politicxs” (Christmas without Political Prisoners) campaign. Since then, every Christmas season, the streets and social media flood with campaign content and slogans. Organized peasants, student groups, family members of political prisoners, former political prisoners, human rights groups, self-convened citizen groups, and transnational activist networks are part of the main groups taking part in the movement. In 2019, ten mothers went on a hunger strike as a “last resort to have their children back for Christmas,” reported France24.

These groups bet on Christmas as a chance to denounce the government’s authoritarian practices by highlighting how families are broken because of imprisonment. They also seize the holidays as an opportunity to collect relief funds for those spending the holidays behind bars.

In 2020, SOSNicaragua-Europa collected funds for prisoners and their families. Their campaign also gave people the option to write Christmas cards to political prisoners. These were written on a postcard designed by French artist Oré, which can be seen in this article's featured image.

Here are a few highlights of the campaign in 2020, from Twitter:

115 political activists will unjustly spend another Christmas in jail. Here is the story of some of them who were illegally imprisoned by the Ortega-Murillo dictatorship and today, while released, they tell us about their experience.

More than 100 people will not be with their families because the regime has unjustly imprisoned them. Our commitment to securing their release is stronger than ever. #ChristmasWithoutPoliticalPrisoners

For many, these types of campaigns do have an impact, as Nicaragua regularly frees prisoners in the weeks leading up to the holidays. In 2020, Rosario Murillo, Nicaragua’s vice-president and Daniel Ortega’s wife, said on December 19 that 1004 prisoners were released. Among the released there were five political prisoners, reported EuropaPress. Therefore, there are still around an estimated 100 political prisoners who remain behind bars.

Since 2018, imprisoned for voicing political opposition

To quell the wave of anti-government unrest that unfolded across Nicaragua between April and September 2018, Daniel Ortega’s government, which has been in power since 2006, turned to violent, repressive tactics. “Shoot to Kill” is the title of Amnesty International's report that chronicles these events when more than 300 protestors were killed. After protests subsided in September of that year, many deemed, like the sociologist Sergio Cabrales, that Ortega’s government strengthened its authoritarian transition. One of the legal instruments that facilitated this transition was the country’s anti-terrorism law, which was approved in the throes of the 2018 political crisis. As early as July of that year, UN News warned that the law could be used to repress peaceful protests and persecute political activists.

According to the Inter-American Commission of Human Rights, police and paramilitary forces persecuted activists even after protests were over, driving approximately 100,000 Nicaraguans into exile. Hundreds found themselves in prison cells, some of them charged with “crimes against public security.” The political opposition argues that many of them are political prisoners.

Since 2018, the Nicaraguan state has let some political prisoners go free. A group of 50 were released in March 2019 and three months later 106 out of 677 activists were released.

However, targeting activists who participated in the 2018 protests did not stop there. On February 28, 2020, police arrested student Jhon Cerna, along with his partner and two friends. Some days later, Jhon was sitting in a courtroom, facing drug trafficking charges. A crime he claims to have never committed.

The Inter-American Commission on Human Rights reported about the legal persecution of activists in Nicaragua. “His lawyer says the process was plagued with irregularities (…). Jhon was sentenced to 12 years in prison, a sentence he is currently serving in one of the country’s biggest jails,” reports Amnesty International.

Moreover, violence and abuse are rife in Nicaraguan prisons according to testimonies collected by Amnesty International and Avispa Midia. And COVID-19 has only made the situation worse. According to an Amnesty article, “A combination of overcrowding, lack of safe drinking water and almost non-existent medical services has turned prisons in Nicaragua into coronavirus incubators.”

Since October 2018, the Mechanism for the Recognition of People who are Political Prisoners (Mecanísmo, for short) has published monthly lists documenting the number and names of political prisoners. The chart below, which was elaborated by the author using Mecanísmo's data, illustrates the evolution of the monthly number of political prisoners over the past two years. 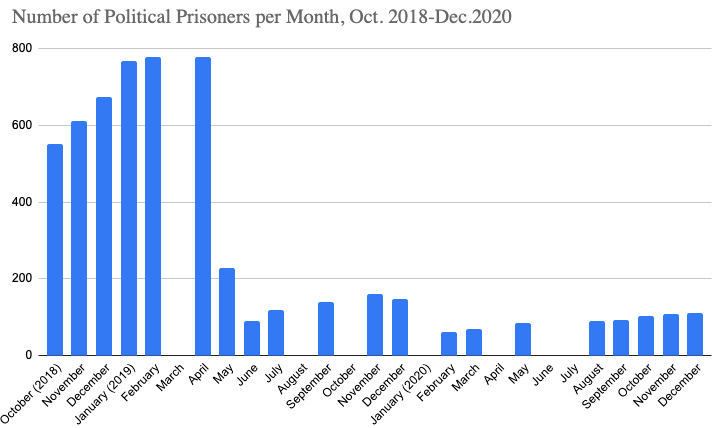