A cleric of the religious political party JUI(F) was arrested 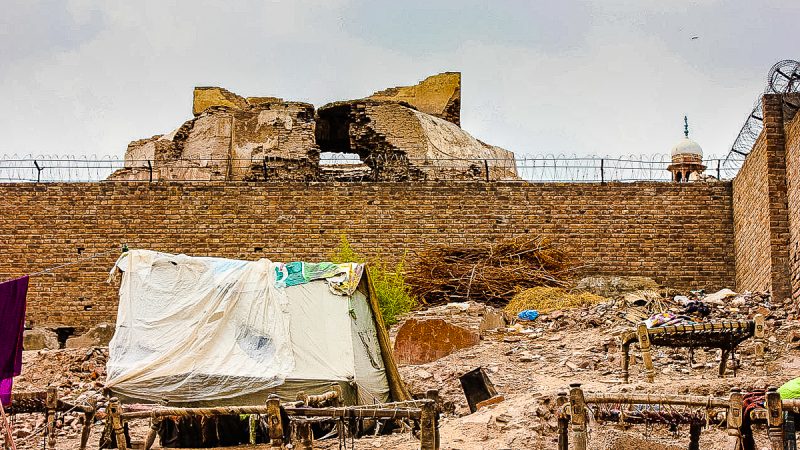 Prahladpuri Temple, an ancient Hindu temple located in Multan, Punjab, has been in ruins since a Muslim mob destroyed it in 1992. Image via Wikipedia by Mubashirtaqi147. CC BY-SA 3.0.

On January 5, Pakistan's Supreme Court ordered local authorities in the northwest town of Karak to rebuild a Hindu temple and adjacent shrine that were razed by a mob incited by Muslim clerics in the previous week.

The perimeter was the subject of a nearly 20-year dispute after a similar attack in 1997 left the temple and the shrine in ruins. Reconstruction didn't begin until 2015, when the Supreme Court demarcated its boundaries and ordered the repairs.

The police arrested a cleric of the Jamiat Ulema-e-Islam-Fazl (JUI-F), a religious right-wing political party that has a strong presence in the area, and several other perpetrators in connection with the attack. Twelve police officers were also suspended for negligence, local reports say.

Journalist Mubashir Zaidi tweeted a copy of the complaint police registered against the perpetrators:

And journalist Muhammad Imran tweeted a photo of one of the clerics as he was escorted by the police:

The main culprit, Maulvi Muhammad Sharif, of #KarakAttack where a temple was razed and burnt, has been arrested by @KP_Police1. via @Xadeejournalist pic.twitter.com/bqB3UCwRqC

JUI-F representatives condemned the destruction of the temple and claimed that the incident was a “government's conspiracy” to implicate its leaders.

In 2020, the United States named Pakistan as a “country of particular concern” for engaging in or tolerating “systematic, ongoing, [and] egregious” religious freedom violations.

Dr. Zakir Naik, a Muslim preacher and televangelist from India, praised the destruction of the Karak temple on a January 2 video. In July, he also voiced opposition against the construction of a Hindu temple in Pakistan's capital, Islamabad.

The rebuilding efforts of the Karak temple will take place under the guises of the Evacuee Trust Property Board, a government body that administers property left behind by Hindus and Sikhs who migrated to India after the partition in 1947.

The Supreme Court also ordered the Evacuee Trust Property Board to produce a report on the number of temples (Hindus) and gurdwaras (Sikhs) in Pakistan and the steps taken by the authorities to protect them.

Soon after the incident, videos showing the attacks went viral and the hashtag #KarakAttack trended on social media.

Attack on the Hindu Temple in Karak is heartbreaking.
May we learn to live as a tolerant society; towards ppl of different religion, ethnicities, gender. #KarakAttack #minorities #HinduTemple

When all humans are equal, why do some get addicted to religion so much that they stop facing reality. I believe the ideology of the people should change first. Why religion is so important for the majority community of pakistan and they are so intolerant to other beliefs?

Vandalized by JUIF. Say this with me Zaidi

In an Op-Ed on Express Tribune, Rustum Shah Mohmand commented:

The pervasive feeling of insecurity amongst ethnic minorities does not augur well for peace and progress. There is a need for course correction and introspection. Providing protection and security to its citizens is a state’s fundamental responsibility. Failure to safeguard minorities is a system failure.